4 Clever Ways To Hide The TV

TV is a semi-wondrous invention that seems less so when it’s turned off. Sitting there. A big, black, square. Right in the middle of your Live Simply, drat.

What’s a meticulously detail-oriented, design conscious person to do?

If ever there was a clever design tactic, it would be this: camouflage your television set among a gallery wall assemblage. This is one of those forehead smackingly obvious why-didn’t-I-think-of-that ideas. All those square, rectangular shaped frames make the outline of the TV seem so much less abrupt, loud, and out of place as it does on a blank wall.

If you mount the TV on the wall, and you’re purposeful about the color choice of your frames and your mats, I mean, you might just try to turn on a picture of the Eiffel tower. 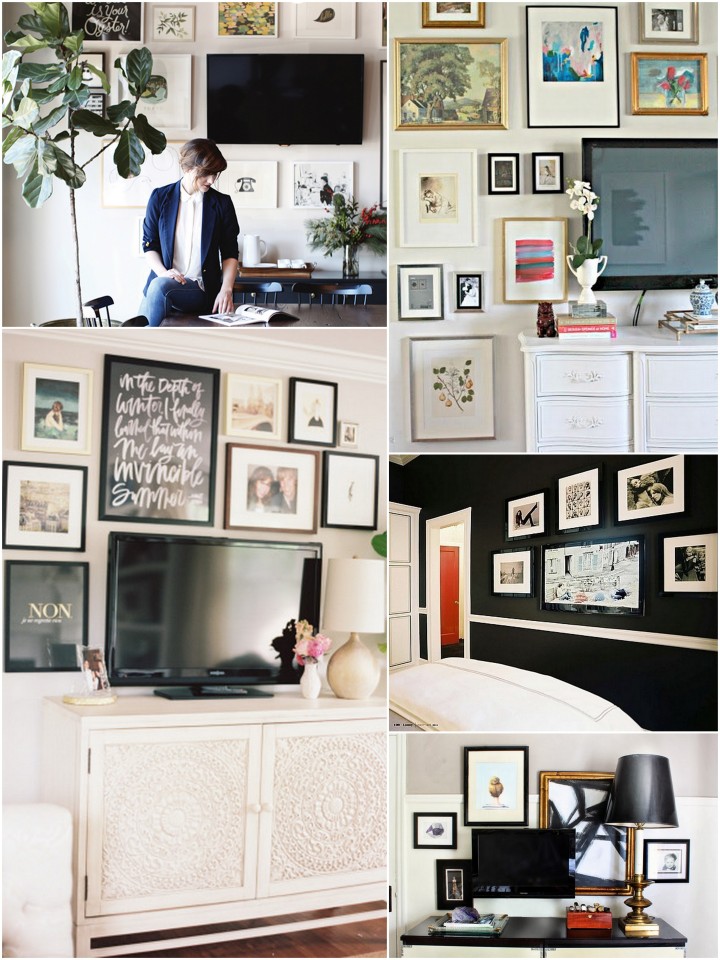 Image credits: (clockwise from top left) Anna Bond via Inspired by This, Burlap and Lace, Lonny Magazine, The Hunted Interior via Sadie + Stella, Lovestru.ck via Style Me Pretty

2. Tuck that TV away

Whether accomplished via sliding panels, shutters, or beadboard, this tactic is the perfect way to have the TV in sight when in use, and out of sight when otherwise.

Also possibly a sort of mean trick to play on small children. 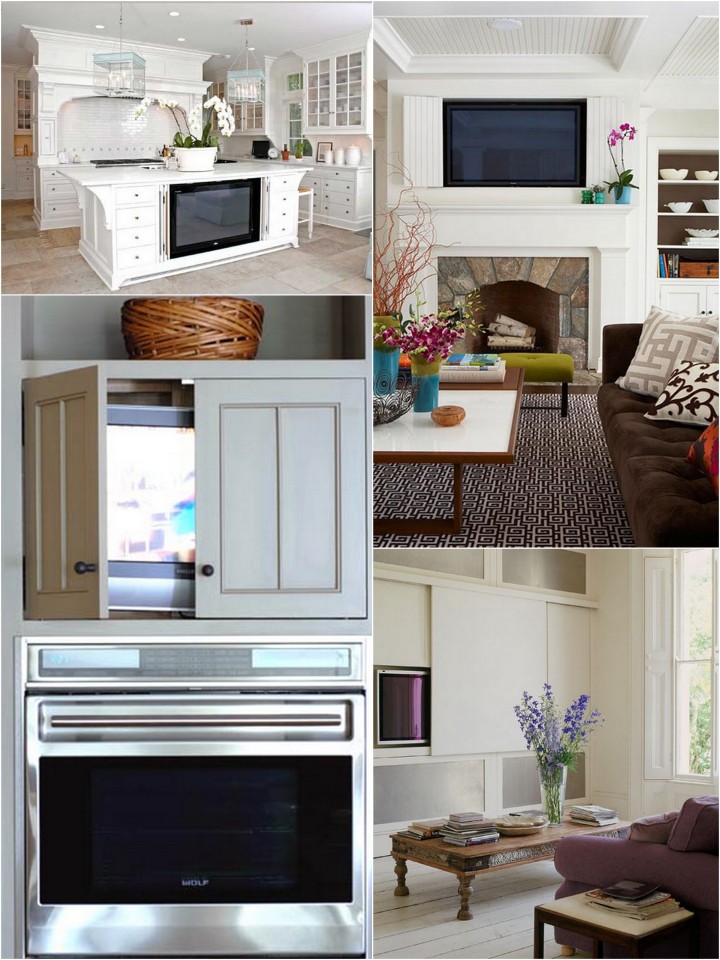 3. Mask the TV with another decorative element

If you want the TV completely covered up, and also want to maximize your opportunity to incorporate decor into your space, then this option is the one for you.

In the top image, the designer cleverly hid the TV behind mirrored antique French windows. Open the windows, conjure the telly. Down below, a mirror glides up and down in order to conceal the TV on an occasional basis, and beside that, it’s as easy as pulling down a vintage world map. 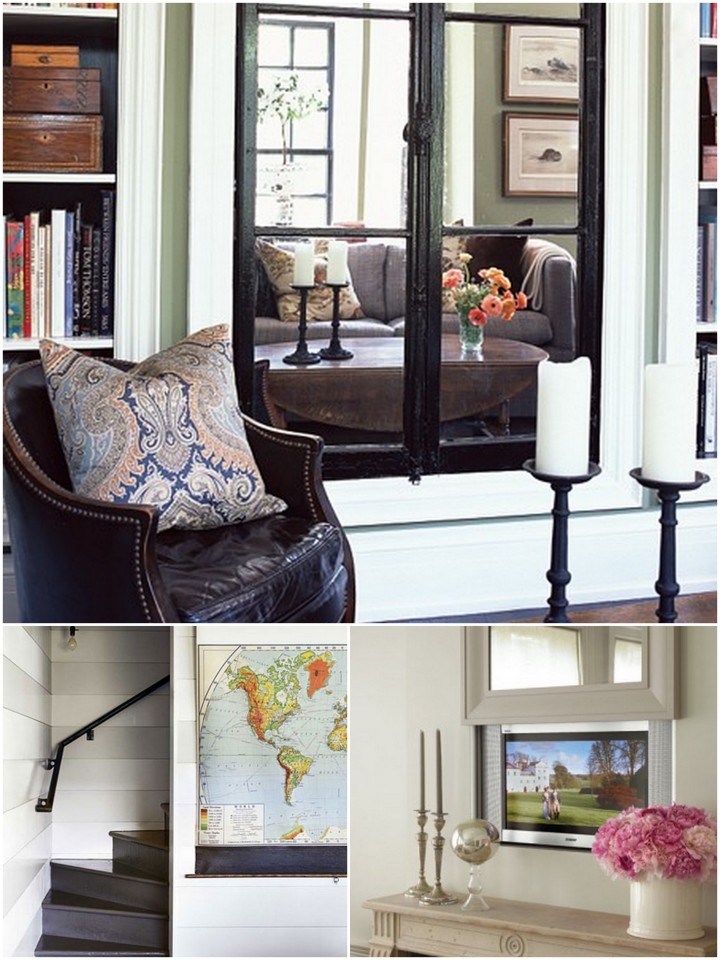 If you’re got a dark wall color, then you’re well on your way towards concealing your TV. As the black color is usually what makes the television stand out in such contrast, it follows that if you set it against an equally dark background it will thereafter fail to impress, as in fail to scream out at you “I’M THE TV AND I’M HERE” you know? 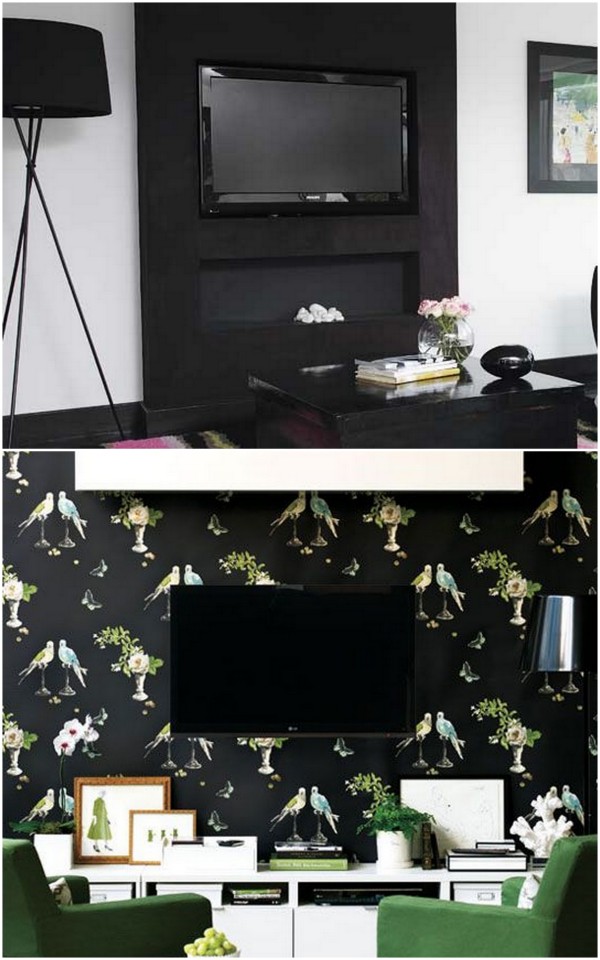 Okay, so now tell me, which one is your favorite?