Spotlight On The (Uber Cool) Camby Hotel In Phoenix, AZ

Two weekends ago (I think?) I touched down in Phoenix, took an uber to my hotel, and exited from the car into the lobby of the Camby Hotel. Probably because the reservation had been (most kindly) made by one of us that wasn’t me, I was entirely unprepared for the design game this hotel is playing.

I humpty dumpty-ed my carry-on through the lobby, trying simultaneously to take it all in like the kids in Wonka, while playing it positively cool, because fawning over is an act which must be reserved for those moments when you are physically incapable of containing one’s affection or appreciation (read: while in the presence of puppies), and because severe sweating is only a elbow twitch away when you’re traveling/ in transit.

Nonetheless, inside I was doing a serious double take. Blink. The molding. Hair swish. Oh my god, that bench. Yes sir, thank you. Those chairs. What the–1 room key is fine. HO-LY. There’s lemonade? Great, thanks so much. EEEeeeee!! SHIT.

Room key in hand, I speed walked/wheeled my way to the elevators, in a frenzy to put down my possessions so as to be able to adequately explore every corner of the hotel to which I was given access. And also the rooms which I certainly wasn’t, but which were unlocked.

Here are the only pertinent details so far: Once the Ritz Carleton (unless I made that up, which I’m almost sure I didn’t), the hotel was recently completely redone by Stonehill & Taylor. The New York firm sought out to create an atmosphere of “‘refined revelry’: remixing classic luxury, taking cues from the hotel’s elegant original bones and layering contemporary touches to create ‘look and look again’ moments.”

Here are some lovely photos by Gregory Goode: 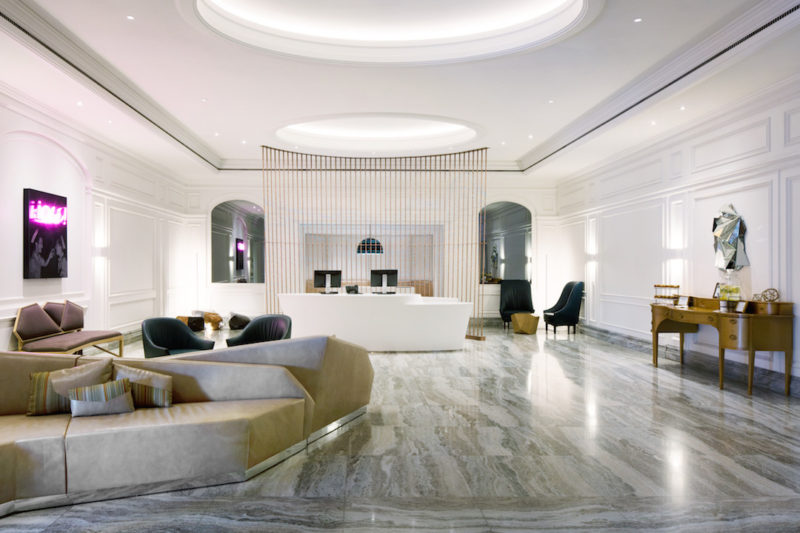 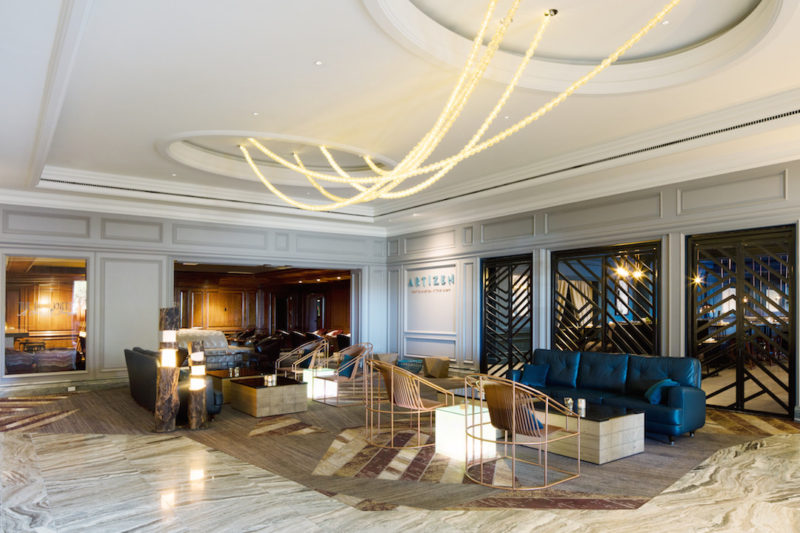 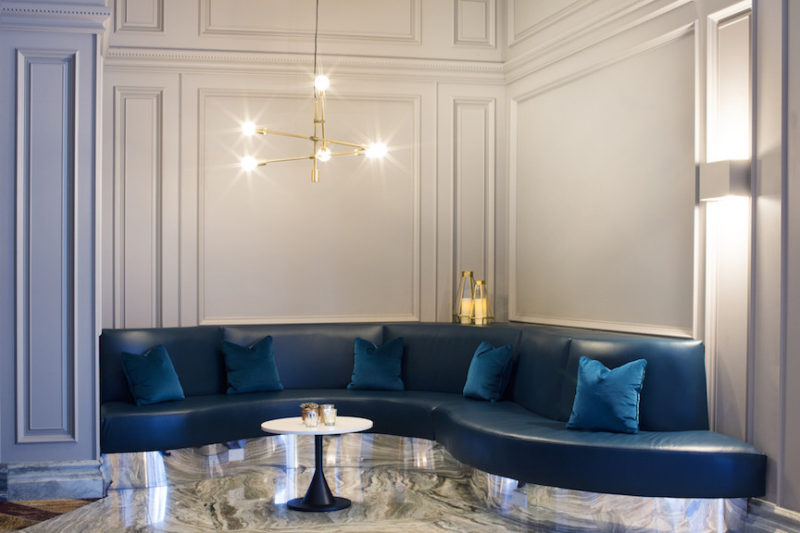 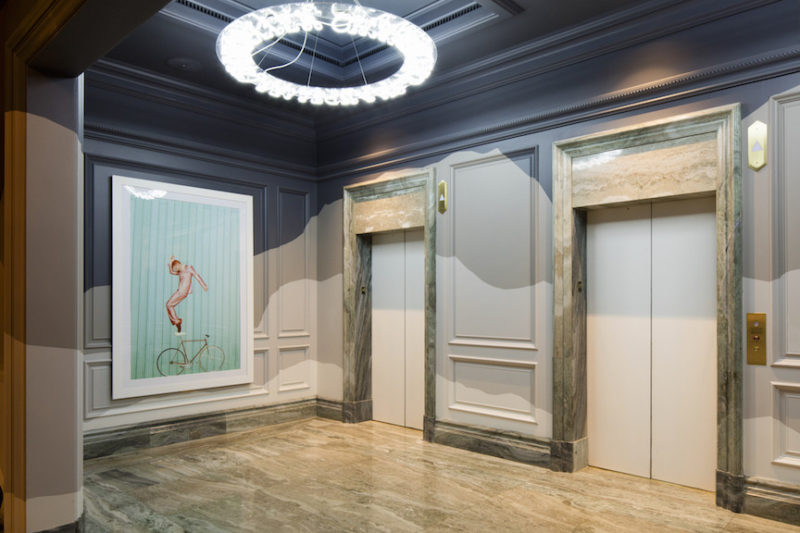 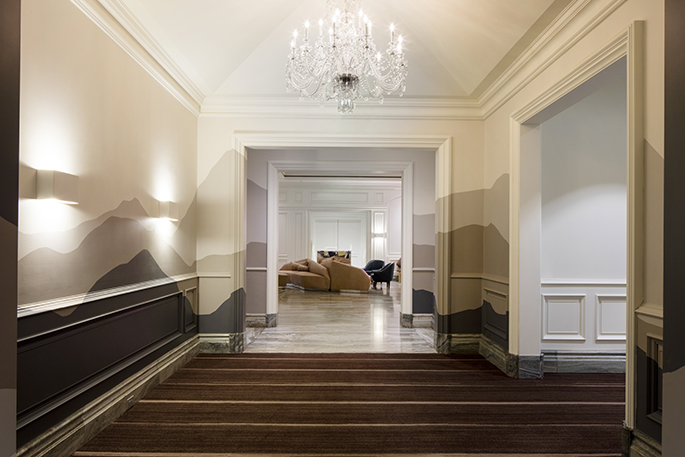 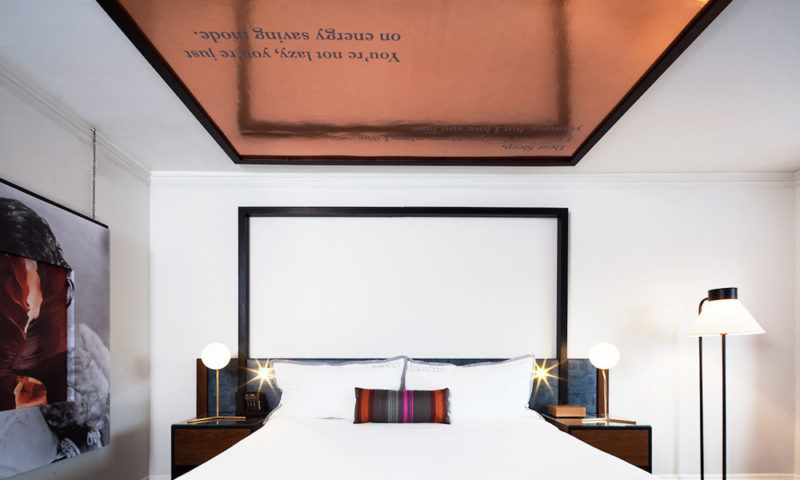 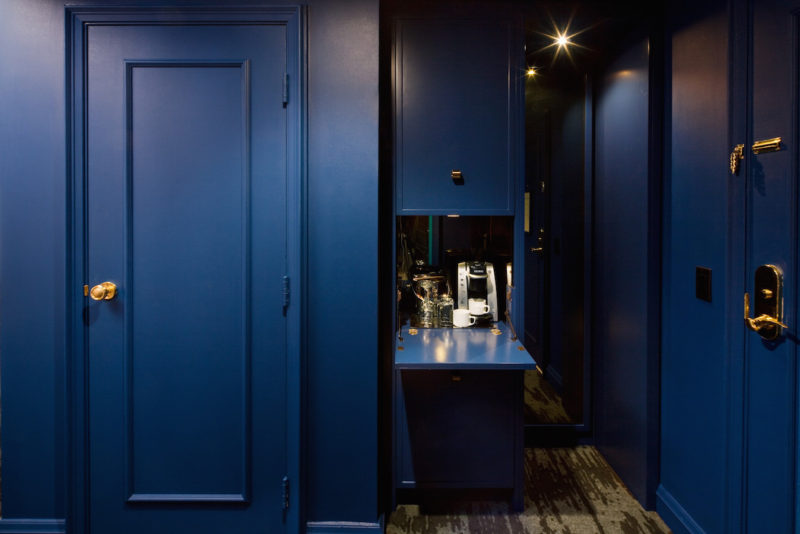 But the details are everything–if you look just a little more closely, if you let your eyes linger, if you look up and pay attention, you begin to see all the many ways the designers injected a delicious bit of tongue in cheek.

(And now for some lame iphone shots c/o yours truly.)

In the lobby elevator area, the walls depict what must surely be an homage to the Camelback mountains. Look up, and you’ll notice the chandelier is, in fact, neon lettering spelling out the word “chandelier.” (Not that there aren’t plenty of bonafide, beautiful chandeliers scattered around the place.) Point one. Man, I love some upscale design that calls attention to itself. What’s that term in literature again? Post-modern? Yeah, that stuff was a topic-swamp. 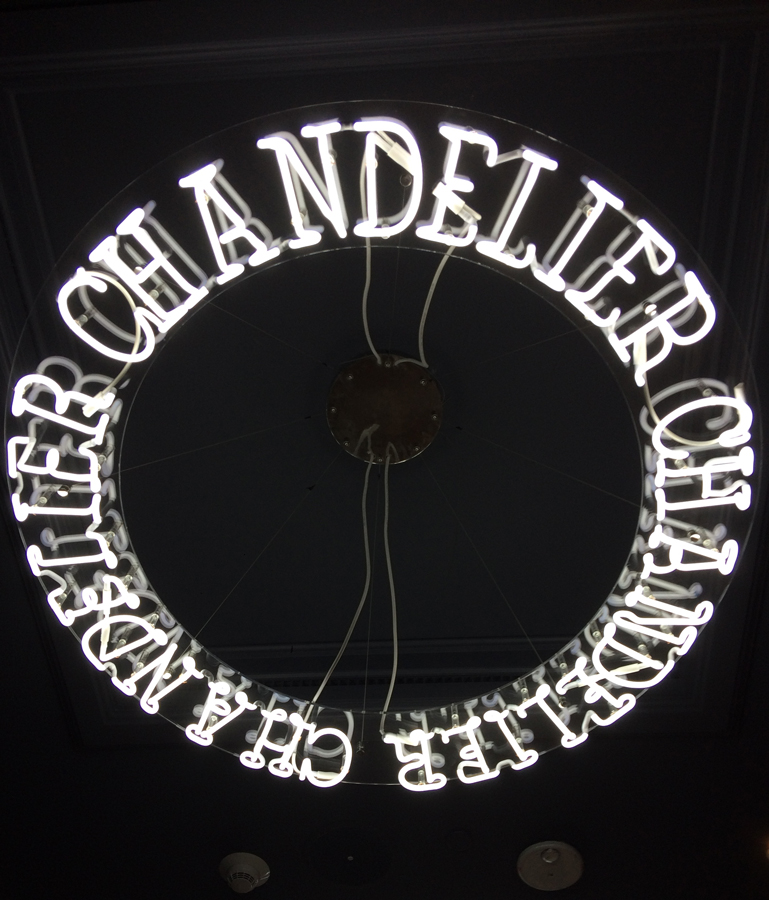 The lamp (already switched on when I entered) has nostrils, through which shines the wood “Moo.” 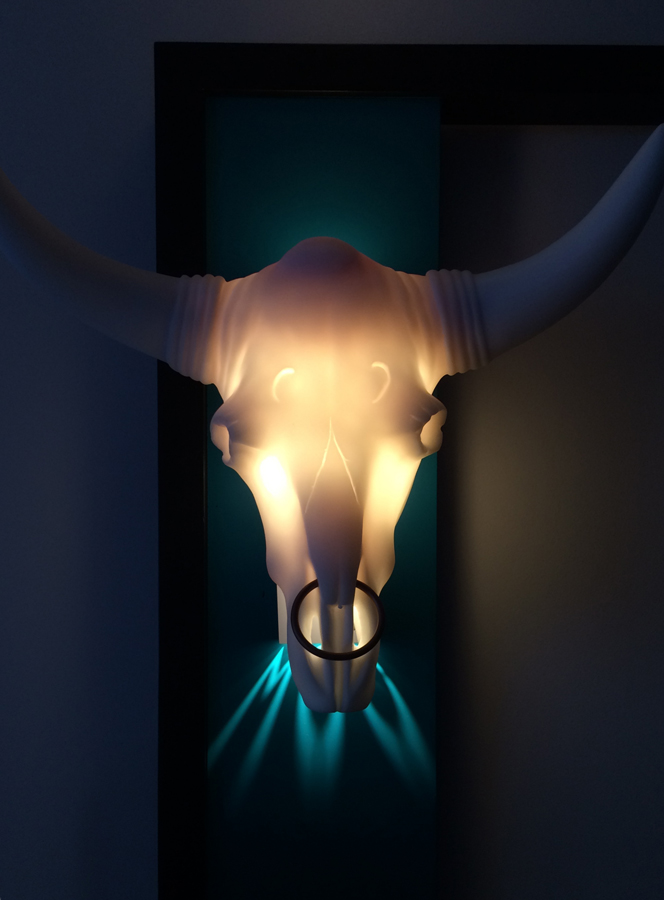 And a zillion other little details I didn’t snap, such as the bag containing the hair dryer in the bathroom, embroidered with the phrase, “Full of hot air,” the bathmat, which featured the words, “Brainstorming room,” and the metallic ceiling above the bed which told me I wasn’t being lazy, I was merely in energy-saving mode.

On top of that, the entire hotel is punctuated by the most fantastic pieces of big, bold art. 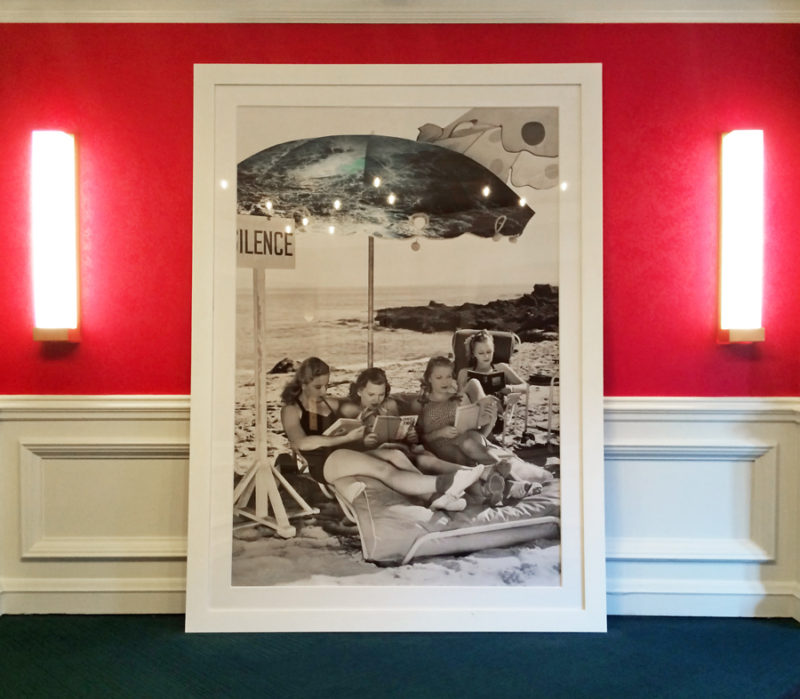 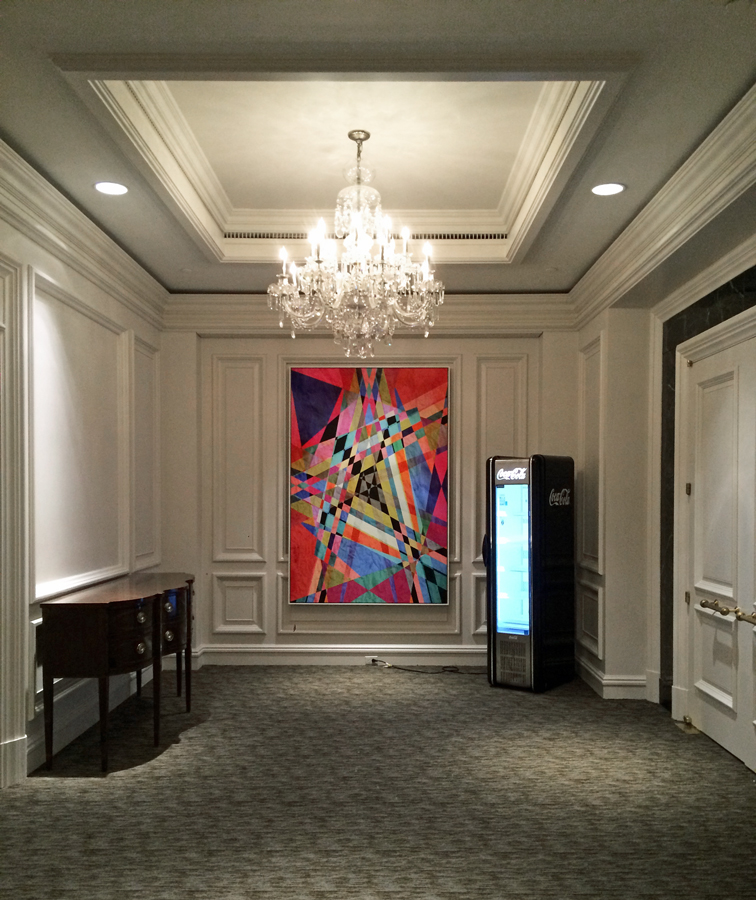 Perhaps my favorite moment in the whole place: 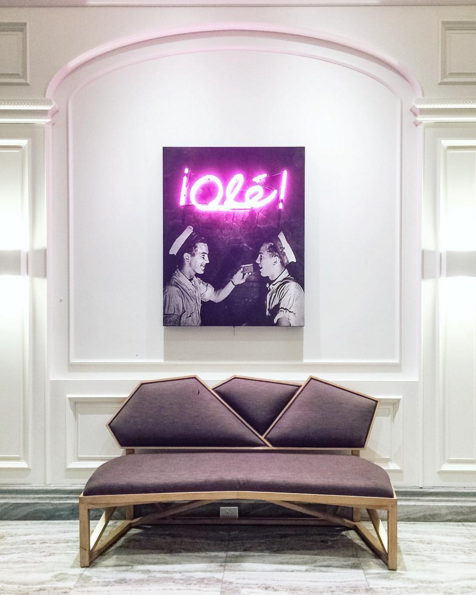 Go stay if ever you find yourself in Phoenix.