Spotlight On The Hotel Condesa Df In Mexico City

Today’s post was an entirely foregone conclusion. Any hotel that manages to make its guests actually feel themselves become the more trendy, stylish version of themselves they always suspected existed but rarely had opportunity to meet merely by staying there deserves a spotlight, don’t we agree?

Such was the case with the Hotel Condesa Df in Mexico City, designed by India Mahdavi, where I had the treat of resting my buns for two nights last week.

The normal, everyday Annie, the one who squints in the sun, inevitably has lingering green crumbs around her mouth post-eating kale chips, and fastidiously uses hand sanitizer walked in through the lobby and was quickly transformed into on-the-guest-roster Annie: cosmopolitan, clued in, and far too cool to be overly concerned with germ transfer. Even if I did go to bed at 9:30pm on the Saturday night I stayed there.

Like how come, you ask? Well, for starters: the cowhide high-back chairs mirroring each other in the entry, split in the middle by a sculptered white table, a bottle of their signature tequila and a couple of limes at the ready. Because apparently entering the establishment is cause enough for a celebratory shot. I took one instantly and by that I mean I didn’t. 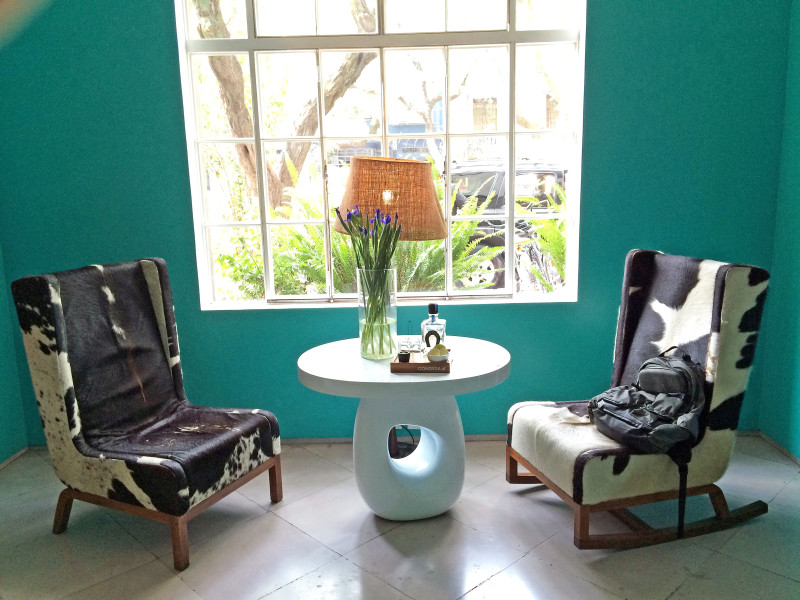 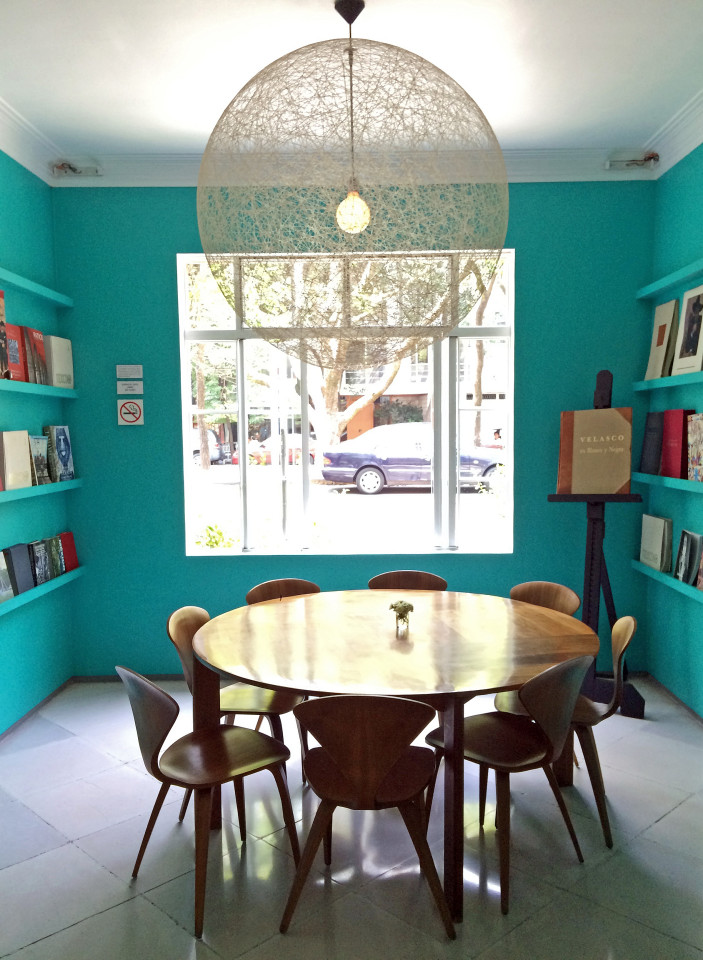 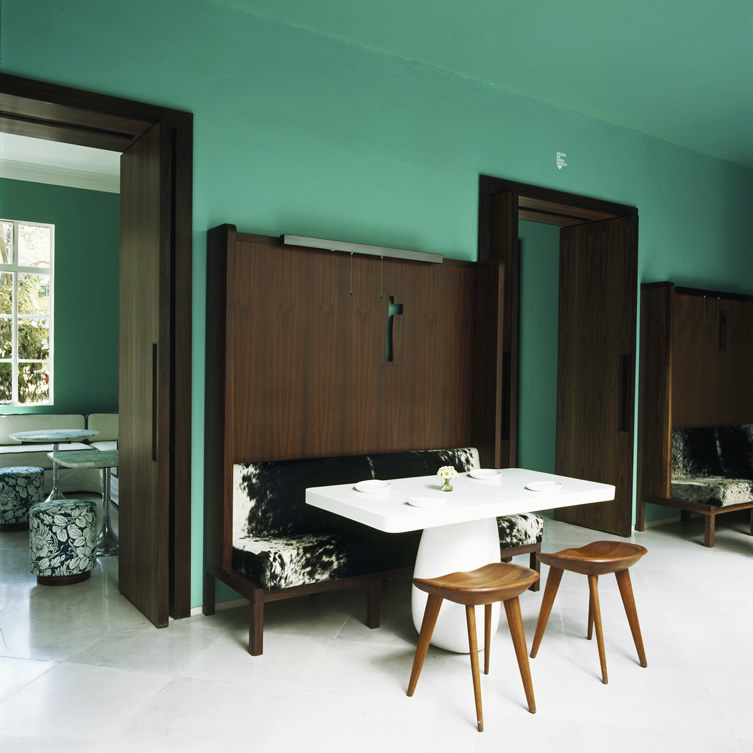 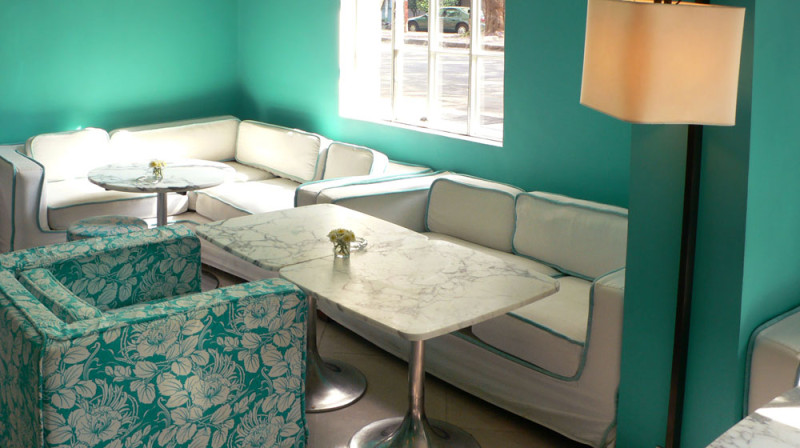 The hotel’s walls are painted white or a bright turquoise, so I obviously complained to management right away. And throughout are purposefully chosen and statement-making furniture, soft vignettes, and high contrast.

The place has a certain Miami-feel about it, albeit far less contrived. Like Miami, without the Miami-that’s-desperately-trying-to-be-Miami. If you’ve been you must know what I’m talking about. 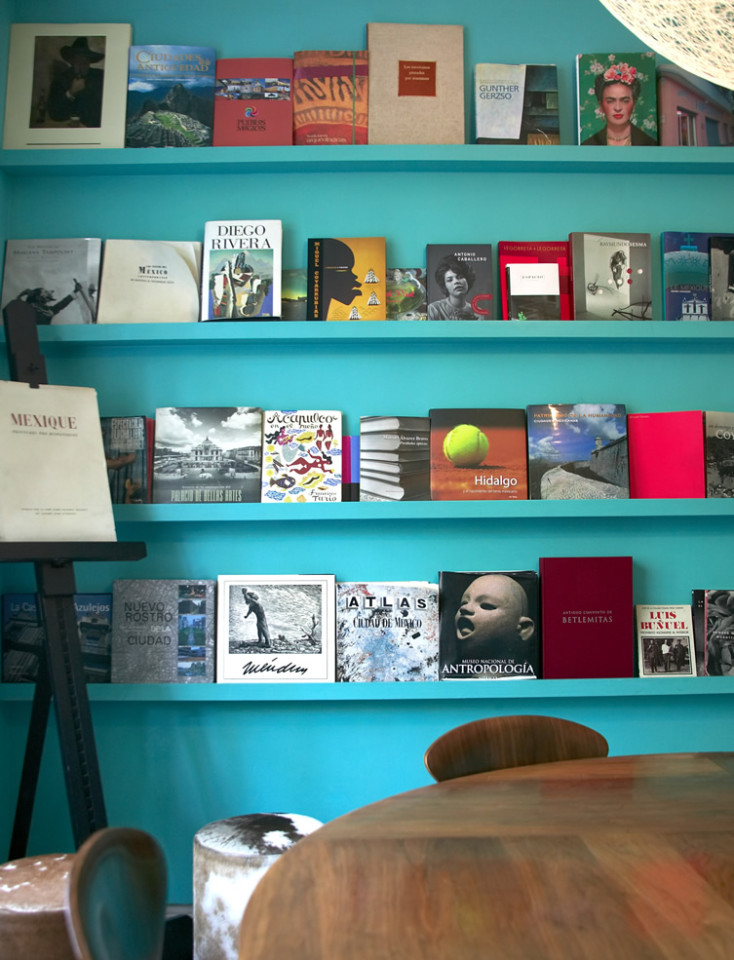 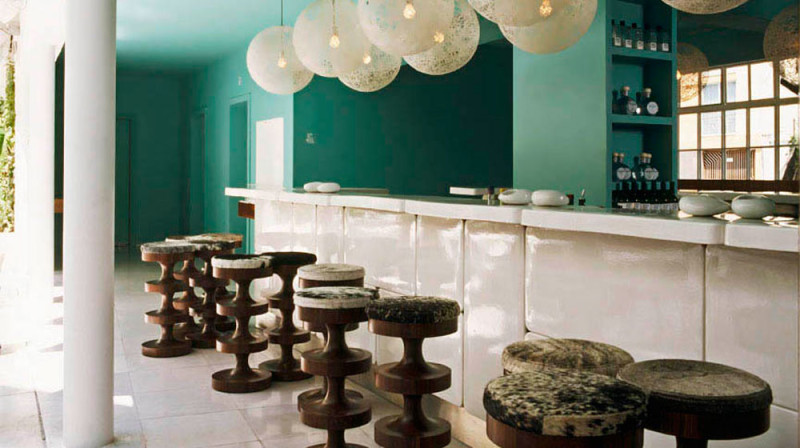 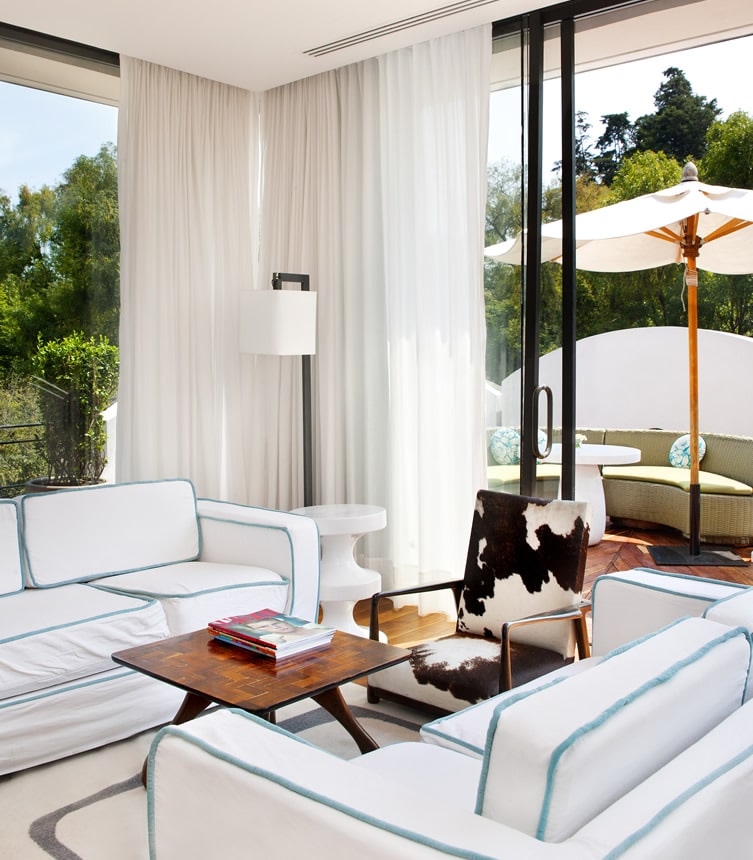 I hate brown pretty much, but the rich wood which featured throughout was the only choice that could have been chosen to soften the bold white/aqua combo. The only unfortunate element of note was that the entirety of the staff, possibly intended to blend into the design, themselves, was uniformed in a poop-brown get-up from pants to apron. Sad times. Which were more than made merry by the friendly dispositions that emerged from beneath the brown attire. 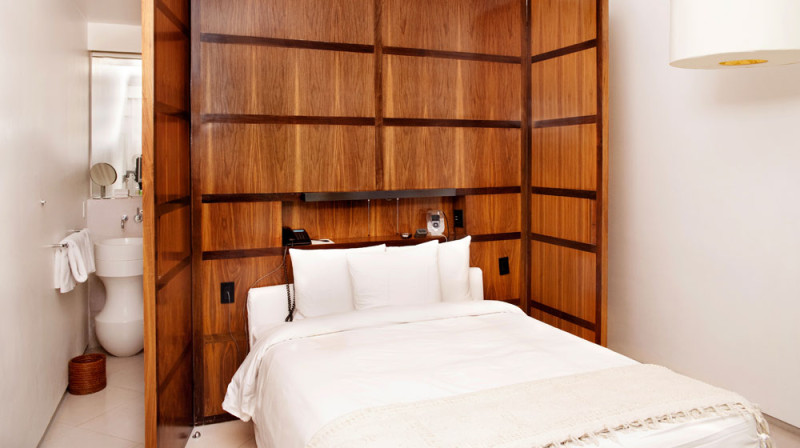 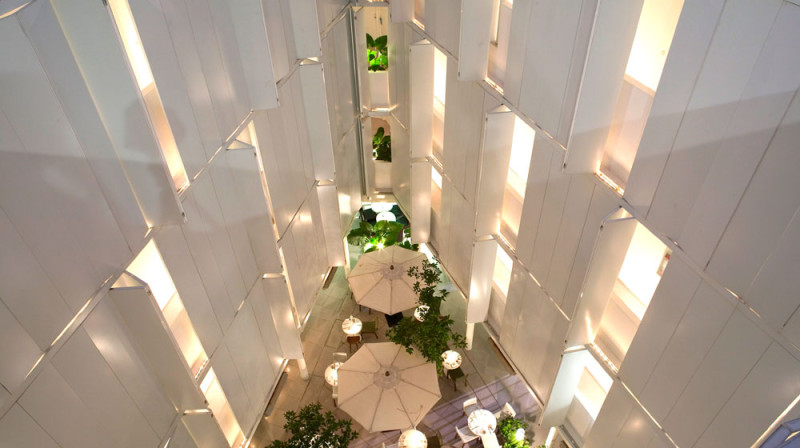 In the center of the geometric structure is a courtyard come bar/restaurant, and the walls surrounding–the hotel hallways–open and close in accordance with time of day and weather conditions. 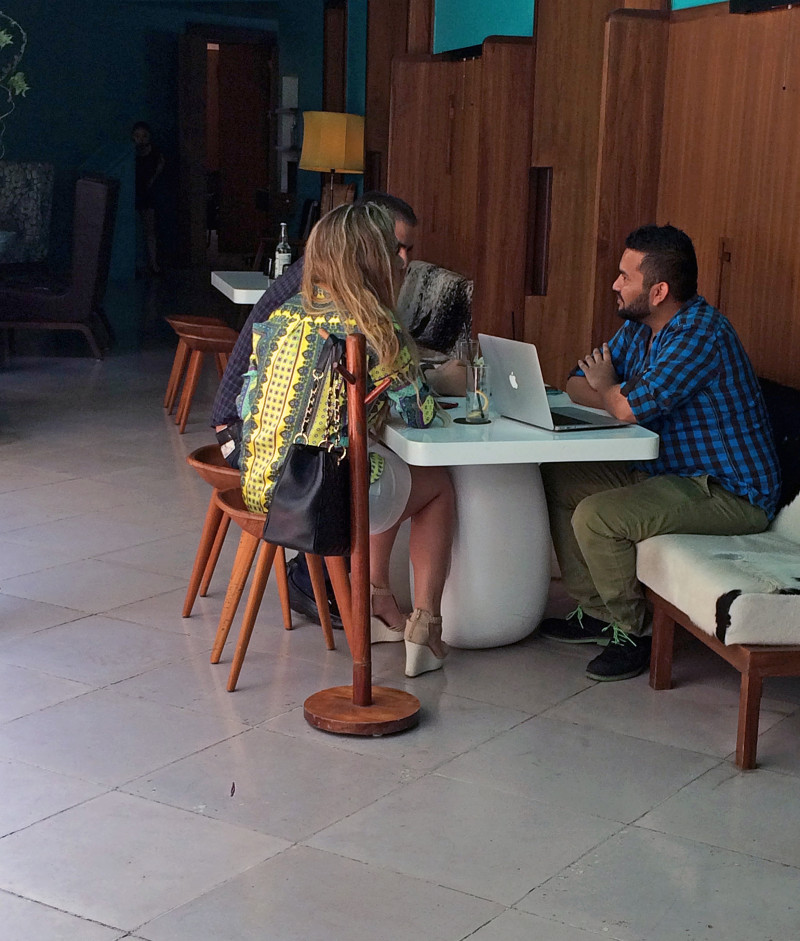 And one of my favorite moments of the entire stay was when I noticed the miniature handbag racks that had appeared table-side. Because haven’t we longed for a place to hang our bag during meal time that wasn’t the back of a chair since dining out became a bona fide activity? 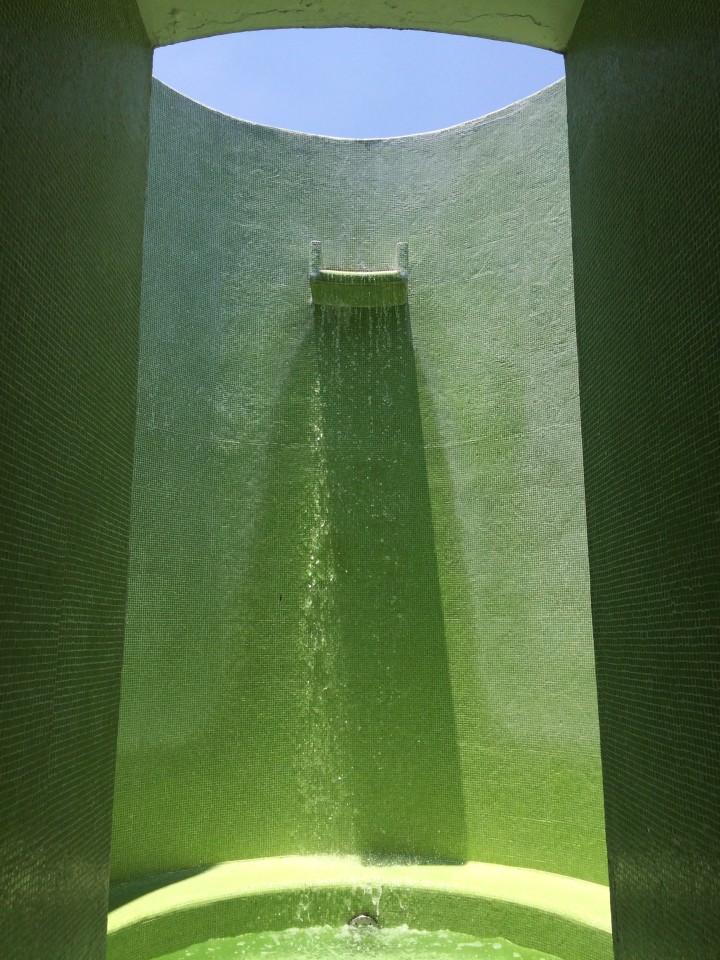 At the top of the hotel is a rooftop bar, a lime-green tiled hot tub and sauna and the like, and the unmistakable sense that you, sipping your sparking water and munching edamame while the sun sets over the city, have made it. Whatever that means. 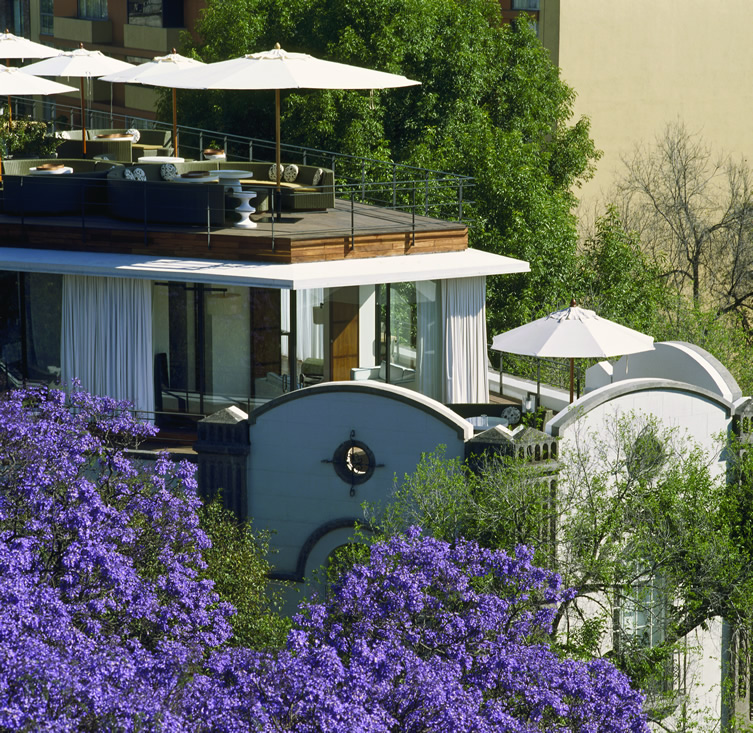 And so concludes another week in the life and times of Live Simply.

Be great this weekend. Eat a brussel sprout, throw out of a pair of nasty old socks, and if you happen to find yourself in Mexico City, head straight for the Hotel Condesa Df.