Spotlight On A Tiny Dockside Cottage Designed By Frank Roop

I haven’t had a magazine subscription since, well, I can’t remember, but I’m sure the publication contained mazes and those games where you compare two similar side-by-side pictures to spot all the differences.

But for my last birthday (thank you T/A), I was given a subscription to House Beautiful. Turns out it’s pretty rad to go to the mailbox and find something that you expressly requested be delivered there (as opposed to the onslaught of Bed, Bath & Beyond mailings that once felt covetable, but have since become near detestable). And when the material contained within said mailing is that of beautiful, or at least interesting, interiors, it’s a happy day.

So I was chomping on asparagus spears and flipping through the latest issue, as one does, when I came to the section highlighting small spaces. And there it was: the most darling space ever to be transformed from a fisherman’s hovel to a habitable beach* retreat.

(*what is the proper terminology for a property that literally sits upon a dock? As in, the tide comes in underneath the house?)

Being that the house is *, there was practically no choice for designer Frank Roop but to create a beachy feel in the space. The palette consists mainly of white and blue, driftwood accents abound–the windows are portholes for captain’s sake. 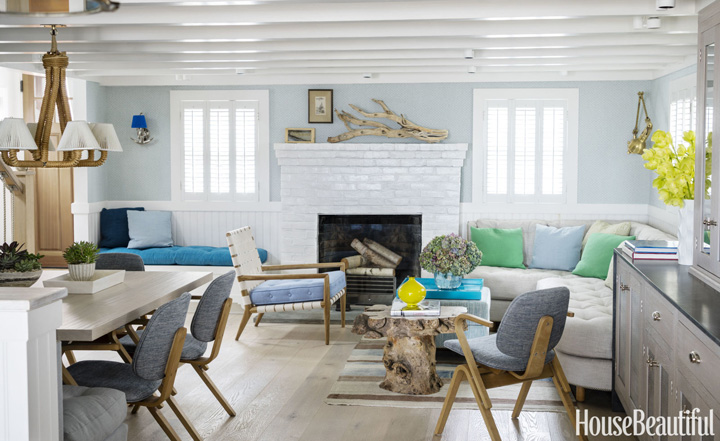 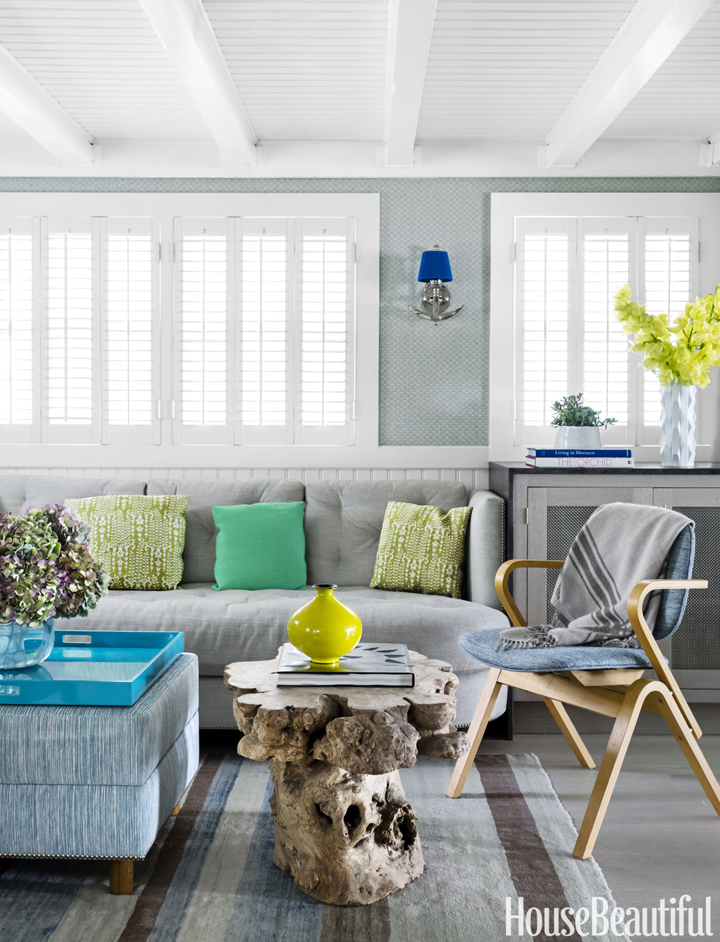 If it had been any other designer, the space might easily have become a nauseatingly gimmicky production. Only, Frank was evidently very aware of the possibility for severe kitch. So, he did things like interrupt the color palette by injecting a small dose of green, adding a funky tree-root table that reads much more forest than it does sea shore, and so on. 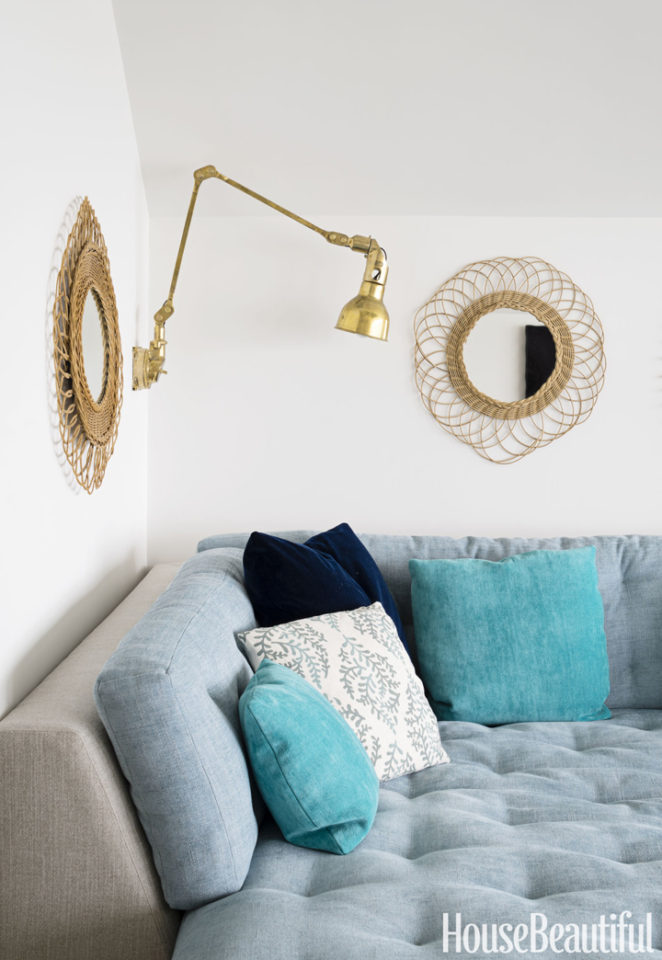 But the main reason why the space avoids being a cliche of itself? Everything is totally legit. 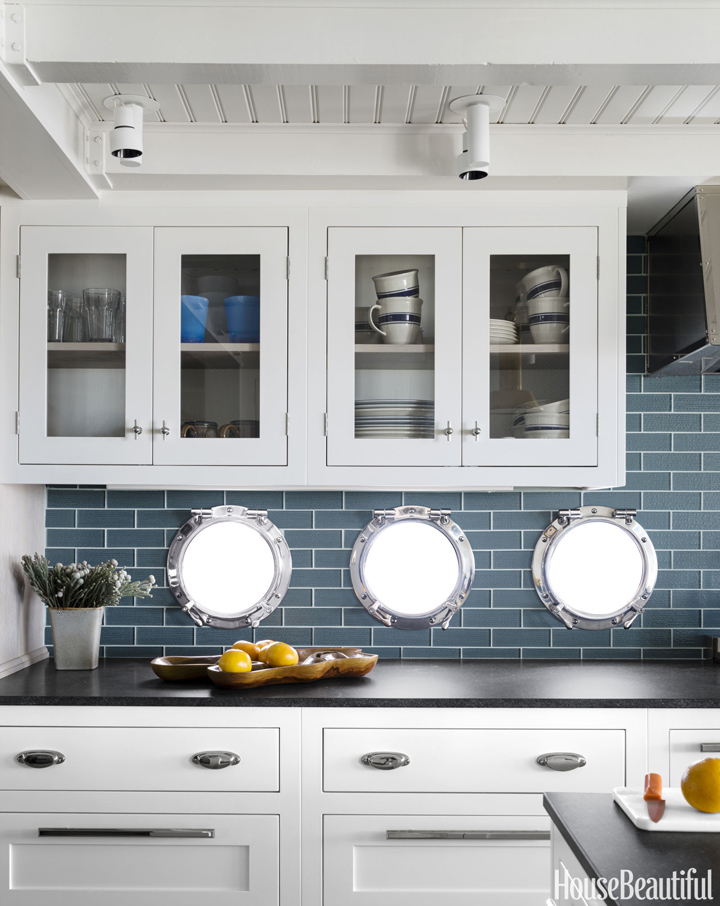 Those porthole windows aren’t reproduction, made-to-look-like, they are proper portholes, purchased from a mariner supplier, and they really open.

Come on; how good is that?! 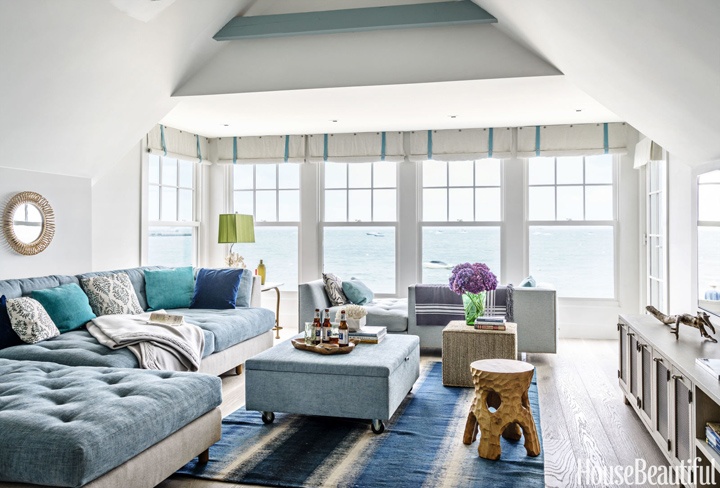 The same thing goes for the rope banister (not seen in these pictures); they had a real, live fisherman come and tie it off. 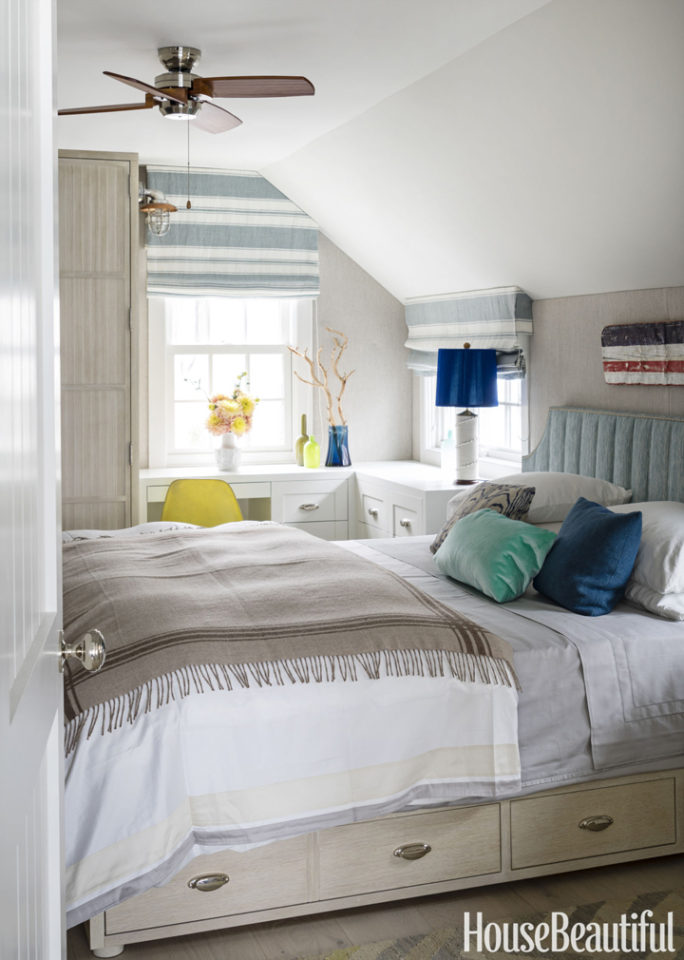 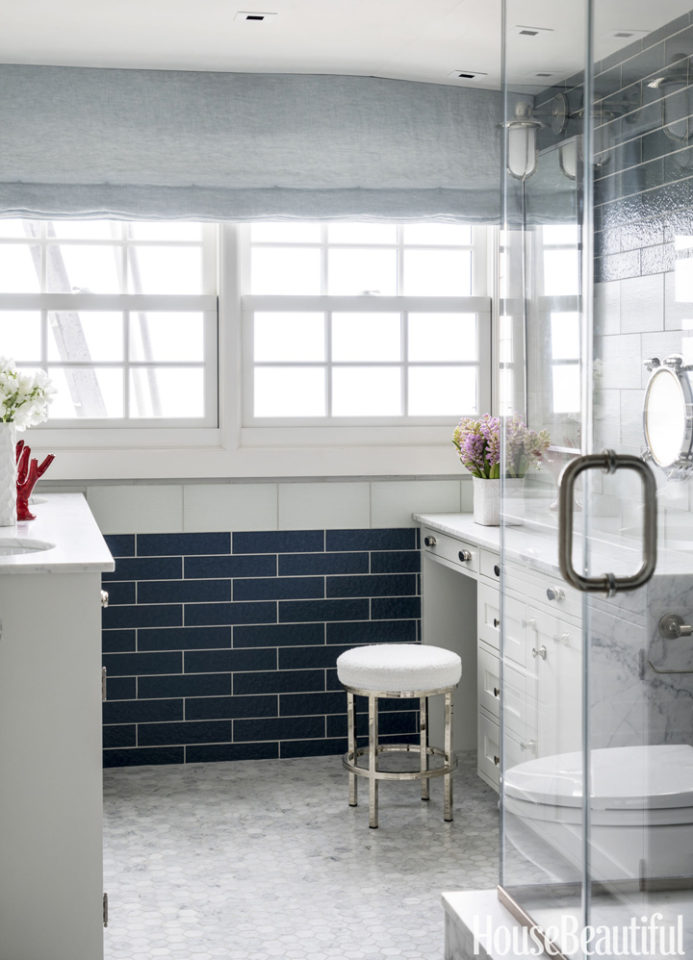 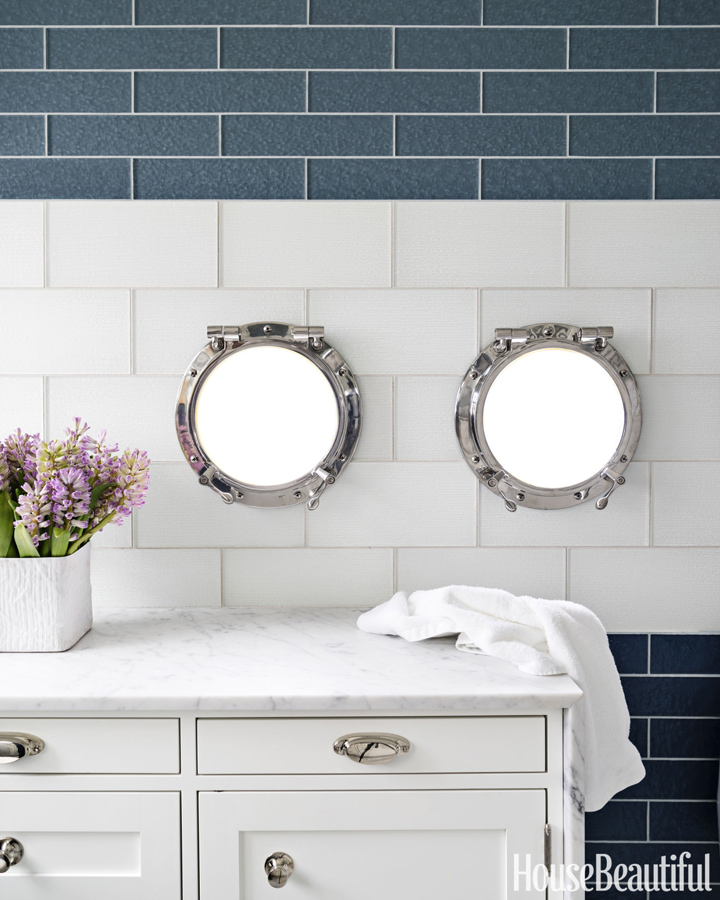 And of course, being a small space, sir Roop used all the tricks of the trade to ensure the home had both plenty of storage and plenty of space. 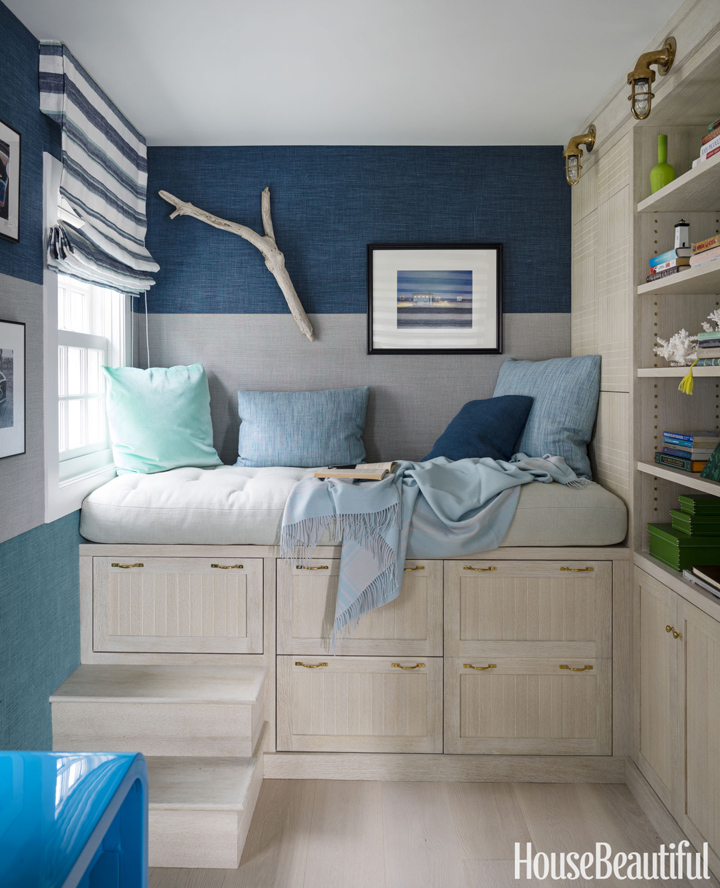 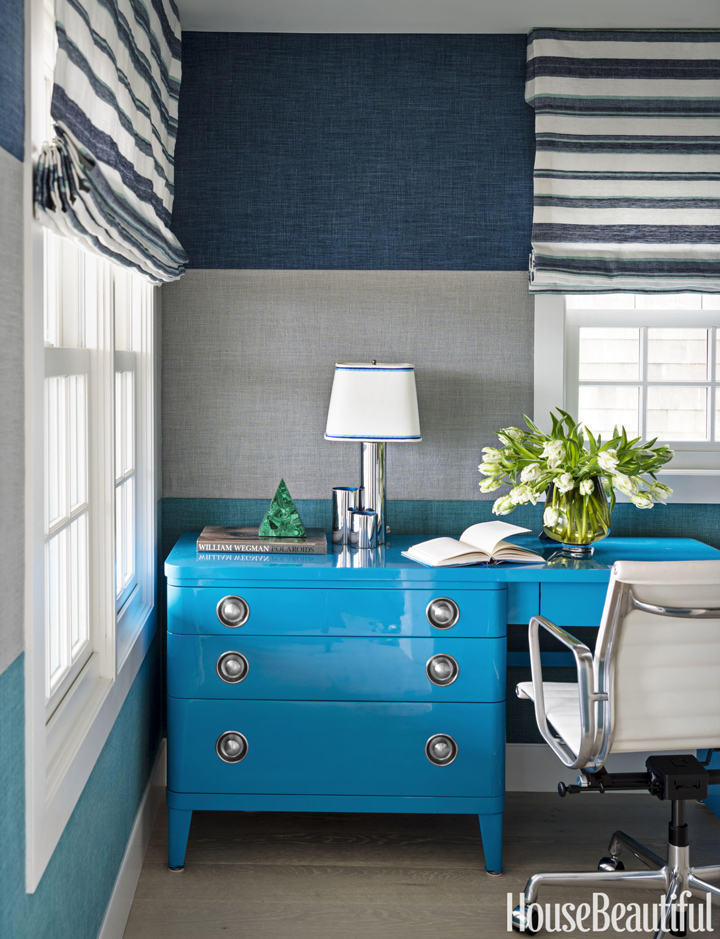