Straight from the LS factory to your screen–it’s the highly prestigious Favorites list for July. 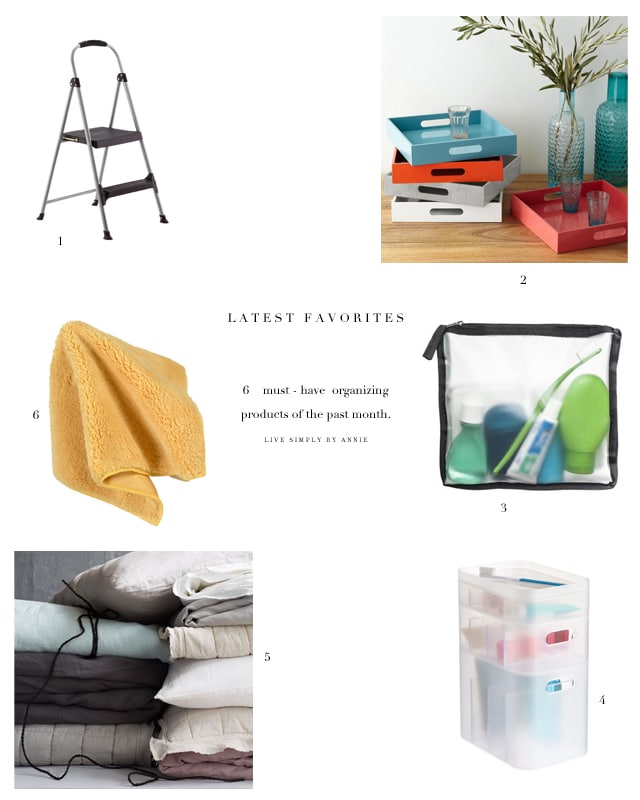 I recently acquiesced to the fact that my old standby step stool that easily fits in my bag often times doesn’t give this 5′ 2″-er the lift needed to reach those storage heights. Nothing would be considered a suitable alternative unless it seriously came close to the convenience provided by the dwarf stool.

This stool, while it doesn’t fit in my bag, slings over my shoulder like a continental soldier, so lightweight I hardly know it’s there. Plus, it folds so flat it’s practically invisible.

I have to give it to the W.E.; their assortment of trays is Simply winning. We all know by now (tell me we do!) the boundless purposes of the tray; they unite and ground a smattering of items that would otherwise appear to float haphazardly on a surface; they provide for easy transport of items from this room to that; they designate an area as an acceptable landing ground, and the rest as off-limits, and on and on.

West Elm’s array of trays caters to most color palettes, comes in varying sizes, and–the clincher not to be overlooked–has cut out handles. Plus, they’re great quality at a reasonable price point.

I’ve used them with great success in too many clients’ homes to count.

This is one favorite that’s been tried and tested and then some, only I haven’t taken a moment to shout it out and it’s high time I did so.

I have two of these reusable zip bags: one filled with my just-in-case handbag items, and one which I use for travel cosmetics, which I routinely stuff to the point of being mercilessly full.

Both have been surviving beautifully for over a year now–one being jostled around constantly in transit, and the other, well, actually, I guess they both do that.

They’re just clear enough that you can easily identify the overall contents, but not so see through that you’d have to be self-conscious if anyone were to see how many damn skincare products you fly with. You know, hypothetically or whatever.

Most bins with removable dividers make me laugh. (Because the dividers are a joke, obviously.)

The dividers aren’t secure enough inside the bins, meaning that the contents, which you’ve gone to the trouble of differentiating between, are doomed to mingle once more. Plus, often times you have to purchase the removable dividers separately from the bins. Bad news.

These, on the other hand, really impressed me. I used them for the first time in the beginning of the month and, let’s put it this way, I just used them again for another client two days ago. That wasn’t all that compelling, was it?

The dividers, which are fully removable, are equally as secure when utilized.

That, my friends, you just can’t beat.

I was a foreigner in the Land of Linen until my bud Joanna was all, “Hey, linen is like sleeping in a cloud, turns out.” And I was all, “Really, is that so?” And then, since I happened to be at Whole Foods, which is adjacent the West Elm, I figured I owed it to myself to do the necessary research.

And then, since I was in need of a summer duvet cover, I chose one of the linen variety on the spot, took it home, washed that sucker (LS 101: new ≠ clean) put it on the bed and bam! Been sleeping in a cumulonimbus ever since.

Let’s put it this way: I wipe up a lot o’ dust and storage vicinity debris. We’re talking the corners of houses no one else ever even thinks about cleaning–me, all up in. Sometimes “in” meaning literally, “in;” yesterday I was in a kitchen cupboard. E.G.

Even after a good vacuum-out, those corners need a thorough wiping down. This cloth is my new jam for such scenarios. Its extra thick nap sucks up those crumbs and dirt and dust with impressive ease.