Today I have just one image of one room for us to ogle, though believe me: if I could find more images of the same space, taken from every inch variant, I most certainly would.

Except that I think one is all it takes. Or, one was all it took for me to fall deeply, majestically, unapologetically in love.

Here’s hoping you have similar feelings (seriously, how could you not??), or, at least, that you like me enough at this point to humor me.

Prepare yourself for the splendor that is this beach dining room. 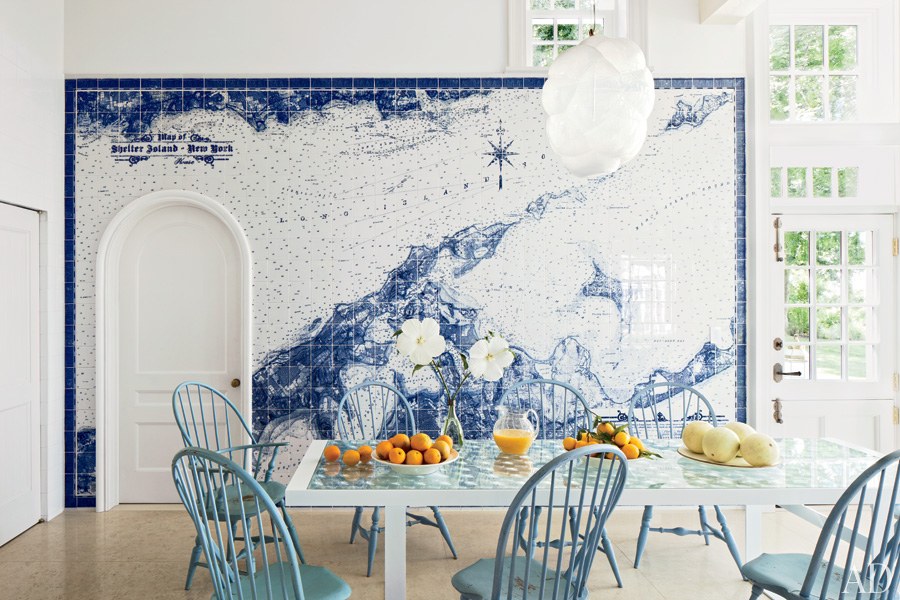 Have your eyes gone wide? Has your brain already begun scheming how to now, finally, master the art of teleportation?

Firstly, there’s the blue and white, so, hello and where do I sign my life away?

But then, of course, there’s the matter of the map wall. This reminds me of my house, since I have a large scale map hanging in yonder room. Except, wait, what’s that we’re getting? It isn’t like that at all? This custom-made tile map flaps in the breeze of my paper version–if it could, you know, do such a thing as flap which it can’t because, once again, it’s tile?!

Not that it can’t be accommodating. To the contrary, look how generously said tile gives way to the beautifully arched doorway in its midst.

And it would be a crime not to call attention to the dutch doorway (have one of those too, not the same in this case, either), and the terrifically bubbly light fixture.

Finally, there’s the matter of the light blue Barton-Sharpe chairs, their seats worn from many butts, and those, attached to many delightfully contented bodies, sipping fresh squeezed orange juice and studying the formation of Shelter Island depicted before them.