Monday’s Meditation: On Why We Chicken Out & How Not To

There are lessons in life that come to us in the form of broad, vague abstractions, and there are those that are of the acute variety.

While skiing recently, I experienced the latter sort, the kind that hits you over the head with its significance. Duh, it seems to say. You getting this? 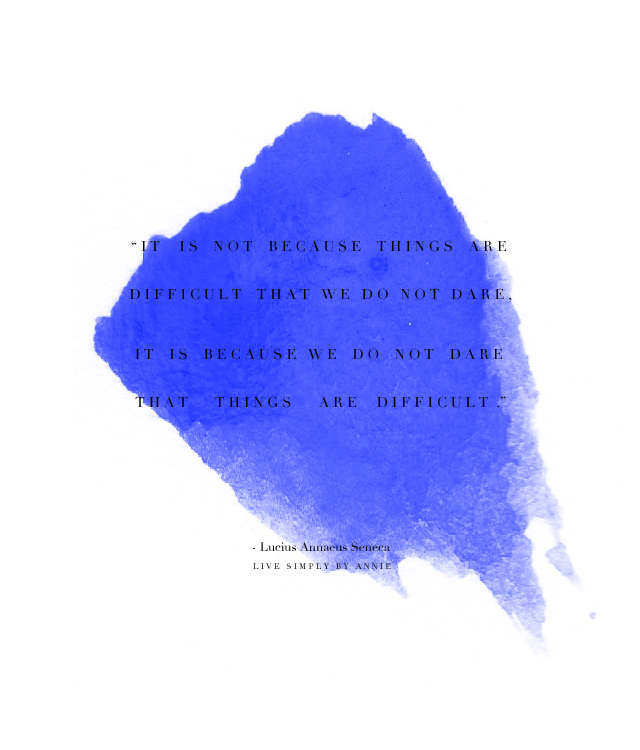 I love skiing. No matter that I absolutely refused to strap on a pair of skis during multiple family ski trips taken as a child, preferring instead to munch on the giant rice crispy treats and glug back the hot chocolate that for my sister and cousins were the reward for braving the cold slopes. People change. Ski bums evolve.

Still, that stint of protesting the slopes set me back several years of experience. Today, I am an enthusiastic, albeit mildly timid skier (I’m told the cautiousness one feels about the prospect of breaking one’s limbs or killing oneself is part of the normal ascent into adulthood–another reason, perhaps, why I should have begun when I was much too young to consider such unhappy possibilities.).

While my nerve has seemed to vary in the past without much of any discernible reason (I nonchalantly skimmed down a black diamond the first time I decided to ski), this time a very obvious pattern emerged: any time I stood at the top of what appeared to be a daunting, steep, drop off, I lost my nerve.

I stared at the incline. I granted the butterflies in my stomach a bevy of seconds too many to flutter their nauseating wings. I told myself I could do it. I knew I could do it. I could almost do it! But I couldn’t do it by then; I’d studied myself scared.

“No, not ready,” I’d announce, sticking my poles in the snow and heaving myself back up, like a kid climbing down the steps of a diving board. “Can’t. Hey, let’s do this easy one, okay great.”

And on the other hand, there were the times when I chose not to stop before skiing down. I got off that chairlift, skied right towards that black diamond and then kept on going. And I didn’t fall on the way down, either.

Every time, it happened that way.

When I stopped to stare, and contemplate, and wonder whether I had it in me, and whether I’d break my body if I tried, I chickened out. I pictured arm casts and crutches. I saw in an instant the long trajectory of recovery that I might have avoided if only I hadn’t attempted to challenge myself. “Should have known I couldn’t do it.” I heard my future-injured self saying in my head.

When I went for it, not letting myself so much as pause, I weaved my way down with confidence and control. Knees slightly bent, skis parallel, adapting to the terrain, I was Lindsey Vonn. I was exhilarated. I was having a blast.

The lesson was, and is, as I have already categorized, obvious.

The longer we indulge doubt and fear, the more paralyzed and freaked out we become. The more time we stand listening to our fight-or-flight, mammalian, scaredy cat brains, the less capable we are of proceeding with boldness, courage and creative flair.

The smart risk begins to seem unwise. The act of vulnerability begins to appear as too much of a gamble.

But once the skis are on, we’re already succeeding. Once we’re bored by the easy trails, we’re ready enough for bigger mountains. Once we’re approaching the precipice, it’s the voice of faith we need to raise the volume on. Faith in the fact that we’re far more capable than we realize, and faith that the trail won’t really be so bad. In fact, it’ll probably be really, really, more-than-unearned-rice-crispy-treats-and-luke-warm-hot-chocolate fun.