It has most certainly reached that time of year when parents can, in good conscious, ban their children from being indoors for whole hours at a time. Anyhow, that’s how it went down when I was growing up and cell phones were still called “car phones” because if you went into the grocery store you weren’t going to carry them in with you, were you?

I don’t care how the tide has turned, I still happily subscribe to the belief that outdoor play bodes better for small humans than staring at screens. At the very least because they have the whole rest of their lives to do that.

I digress–no matter who wants them doing it or how big a yard is, playing outdoors becomes rawther unfeasible if toys are not within easy arm’s reach. And so I present unto you 8 options for organizing and storing outdoor playthings. Yep, now even the lawn is going to Live Simply, too. 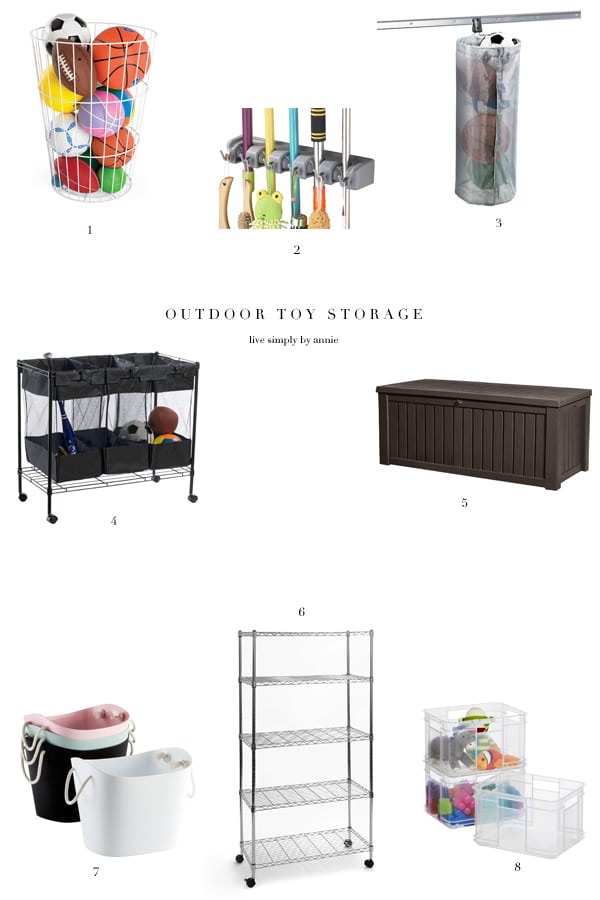 While this does necessitate a garage or shed wall, it’s likely that you’ll already be storing things like golf clubs, bats, racquets and so on in such a space, meaning the only difference is now they’ll be manageable.

This is hardly the first time I’ve mentioned this mesh storage bag–it featured in one of my monthly favorites posts, if I’m not mistaken.

Its streamlined design is nonetheless perfect for its purposes: throw the outdoor toys in the top, and kids can still easily open the front velcro to reach out whatever play thing strikes their fancy.

I used this for the fist time with a client the other day and was mightily impressed. Three separate storage bags lend themselves to easy toy sorting, all of which can, with the peel of a velcro strip, be removed from the frame and carried away–to the park, let’s say.

An obvious option is a deck box. Yes, they eventually get rather grubby, but then that’s what hoses are for.

Whether in-garage-doors or under an overhang, an industrial shelving unit is always a safe bet.

You combine that with a load of:

And then you add some labels to those bad boys, and you’ve got yourself categorized, mobile, outdoor toy storage.