Here it is: the official roundup of products I couldn’t have lived (worked) without this past month. Get ’em while they’re hot and whatnot. 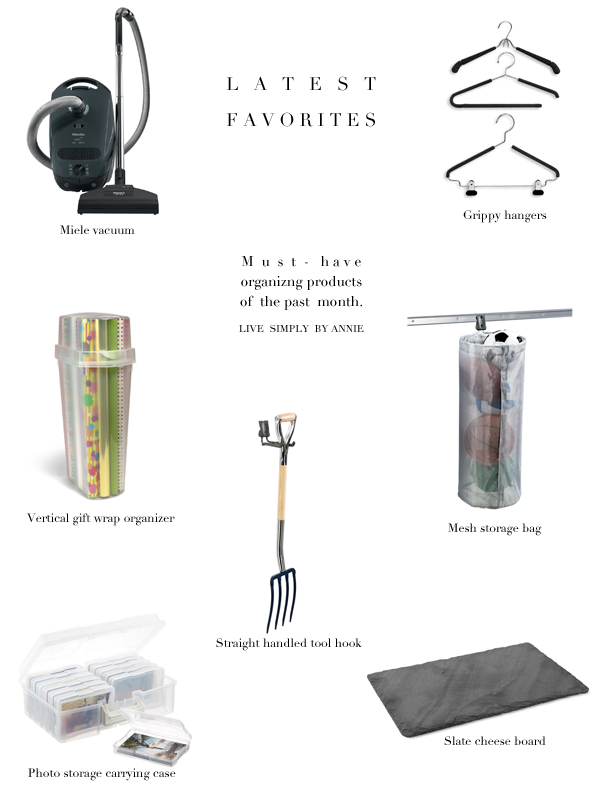 I have already waxed on about my unending love and appreciation for this beautiful piece of machinery (would we call it that?) in this post, aptly titled “the household tool I wish I’d bought sooner.” I’ll spare you any further BDA by saying only: I need it; it needs me; you probably need it too, even if you didn’t know you needed it before you stumbled on this post.

over any other. They’re the only ones I ever use for myself and for my clients.

Recently though, a client objection caused me to need to seek out another suitable (pun definitely intended) alternative. Said client fears the creasing of her slacks, you see. And while she happily adopted the slim velvet version for her tops, she requested a more gentle caress for her bottoms.

So I went and stared at the hanger wall at the Container Store for a good bit of time. Stared and felt and broke out in various faces of disgust. That is, until I landed on these guys. Covered in a kind of soft, barely-squishy foam that truly is grippy, their pant rod is tubular in shape and on the beefier side of things. They have an opening on one side so that pants can easily slide on and off, yet (!) the rod is long enough that no pants would ever, of their own accord, fall off.

There’s not a whole not to say about this (lucky you) except that it does it’s job very respectfully. All those rolls of wrapping paper whose storage would otherwise stump you, would be tossed into some drawer or cabinet or other to rip and crinkle to the point of being unusable find themselves perfectly suited to this container.

Plus, you almost think your rolls will be too tall for the lid to fit and then when it does you’re the most pleasantly surprised.

I discovered this while working on what turned out to be the first of many garage projects this summer. Proving itself effective at storing outdoor toys, I subsequently used it in every garage proceeding that first one (including in this one).

Its wide top opening is conducive to hurried clean-up bursts, while its velcro front opening is small-human friendly; kids can easily reach right in and extract the playthings of their choosing.

Other highlights? It’s long enough to play host to a hockey stick and wide enough to house a fully inflated basketball plus more.

And hey, far be it from me to prescribe your usage. I used it for client toys, but you, clever one, could use it for that other thing. And also that other stuff.

By far one of the most versatile utility hooks around, this can hold everything from skis and snowboards to rakes and brooms and shovels and more (oh my!).

It’s striking me as utterly strange that I seem not to have spoken about this photo storage case until now, as it’s my go-to choice for clients’ pictures.

It holds a generous amount, features individual cases so that one can distinguish between albums and photo categories at one’s will, and then stores them all together in this handy carrying case.

This is a photo solution.

See, I looked around at what felt like everywhere for a tray of the right style and proportions, but to no avail! Until I stumbled upon this and was overcome by the injustice of a perfectly wonderful perfume tray being misbranded as a cheese board. So I rescued it and returned it to its rightful position on the vanity, where, between you and me, I think it’s far happier playing host to fragrances than to it would be to smelly cheese.

The moral being: use your imagination kiddies!