This loves list was the speediest to ever assemble itself, such was the clarity of my winners this month. Let’s get to it. 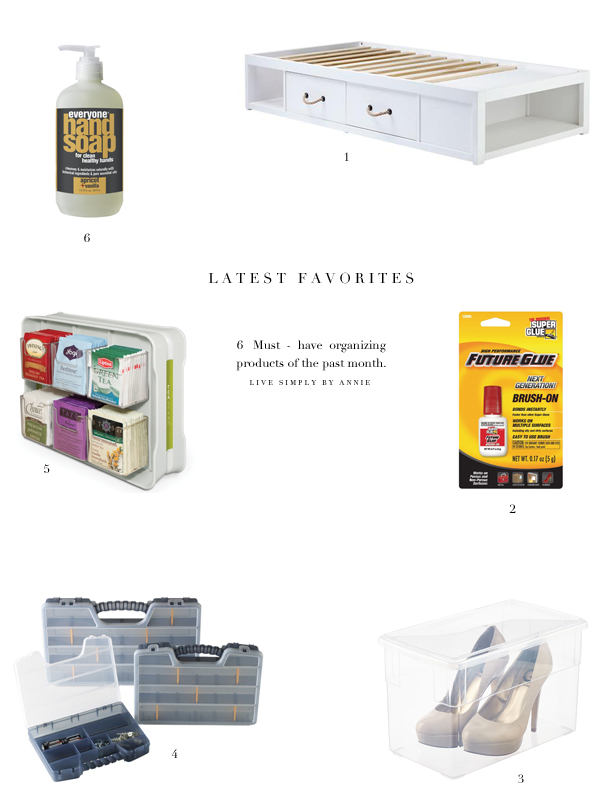 My client’s two young boys who share one very small room needed a bed upgrade, which is to say, they needed beds, since they’ve been camping out on the floor post-cribs. Introducing a couple of mattresses into the equation was clearly a priority. Like hurry, Annie, hurry! Since I was starting from scratch and the room is so dang tiny, I figured, “Hey, why just add regular beds they’ll have to shove things under for extra storage space? Why not give them beds with storage built in?!”

So bloop went the twin twin’s into the online cart and bam came the delivery ticket and then hot darnitall! Those beds showed up in a white truck and were moved into that bedroom. (I’m summarizing, since that process took around two hours, involved two delivery guys and me, a very steep and long driveway prohibiting the truck from making it to the top, my car being used as an in-between transport, unscrewing of stair rails, putting back on of stair rails, getting stuck in the stairs, discovering an alternate back entrance, sweat, lots of yelling in spanish amongst the guys, gnarly bruises polkadotting my legs a week later, and then, finally, sweet success.)

Let me just tell you how much storage capacity these beds actually have: a lot.

Let me tell you what that meant we could eliminate from the very limited floor space: two mammoth dressers.

Also they look so great and their rope drawer pulls put it over the top.

If you have yourself a small human who lives in a small space, you’re going to want this bed.

2. Future Glue In Brush On

This glue is entirely aptly named. I don’t know how the formula differs, only that it does, since it’s more effective than any other super glue type product I’ve used.

The fact that it comes as a brush-on instant adhesive is the most brilliant thing about it. No one has time to be messing around with a loaded tube of super glue.

One of my clients discovered her grandmother’s ceramic cake toppers in a box in the garage, only the head of the lady was broken clear off. Brush brush and that head and body were one like they’d never been anything but.

It’s no secret that I’m an avid lover of the Container Store’s clear storage boxes. They’re essentially the most fail-safe, reasonably priced organizing products a person can buy, if you ask me.

It’s only as of late that I’ve been incorporating the tall shoe box into my repertoire, and it’s a winning addition, believe you me. Sure, it works for high heels, but also, majestically organizes things like tall bottles, which would ordinarily be forced to lie flat and roll around inside a normal shoe box.

I first used this parts organizer many months ago to organize an extensive beading and jewelry-making supply. It impressed me then because of its sturdiness, its customizable dividers, and its portability.

This month I circled back around to it in order to organize a handyman/MacGyver case for my client’s husband, who expressed to me in earnest his need to keep the random assemblage of parts on hand.

I told him great and fine, only a box of shit didn’t quite qualify, and could I please elevate the situation for him? Yes and thank you, he said, and left me to my devices.

The great mystery is: when he and my client surveyed my work in the garage (where the tool situation lives), they were beyond pleased. My client, in fact, texted me a picture of her hubby holding up the MacGyver case I’d made him, smiling from ear to ear, and giving a thumbs up.

It was over a week later before we chatting in their kitchen, and he made reference to my mocking his handyman skills, “Maybe I should put those screws in my BS MacGyver case,” he said.

“Yeah, my BS MacGyver case. ‘Cause apparently it’s all a big joke.”

“The label said B’S MACYVER CASE!” we shouted in unison. “B apostrophe S!! Not BS!!”

The mystery of course being: why did he look so happy in the picture?

August’s favorites included a stellar adjustable lid holder from YouCopia. As a thank-me, Youcopia sent a few more products my way (thank you).

This tea stand is one I’ve used and loved with clients in the past, only I didn’t connect the manufacturer dots. When I spotted it in the Youcopia package, it all become clear: of course that tea stand had to be theirs and no one else’s. Like the lid rack, this tea stand has such obviously superior and well-thought design.

Of course it’s all contained in one unit, so that you can pull the stand from wherever it lives and have access to a whole collection, but what’s even better? Each individual holder-thingy is easily removed from the unit. Ostensibly, to enable filling up, just taking out one type, cleaning, and on. The whole thing is super compact, but also incredibly visible, and I could envision it being used to store any number of small things other than tea.

6. Everyone Hand Soap, Apricot plus Vanilla

I have a hand-washing habit that’s perpetually burgeoning on concerning, and thus I’m forced to be finicky about the hand soap I use.

I picked up this Everyone guy from a local food co-op after falling in love with the smell and the fact that it’s not loaded with the nasties.

Since then I’ve purchased an additional two bottles. Listen, don’t judge me. At least I’m at close to germ-free as a person can be.

What have you been loving this past month, hmmm?