If you’ve been reading along this year, these picks will likely not surprise you in the slightest. Probably you’re getting a little sick of hearing me talk about them, in fact. Regardless, they proved themselves essential to my client work this year and so I feel obliged to give credit where it is due–

My favorite organizing products of the past year then: 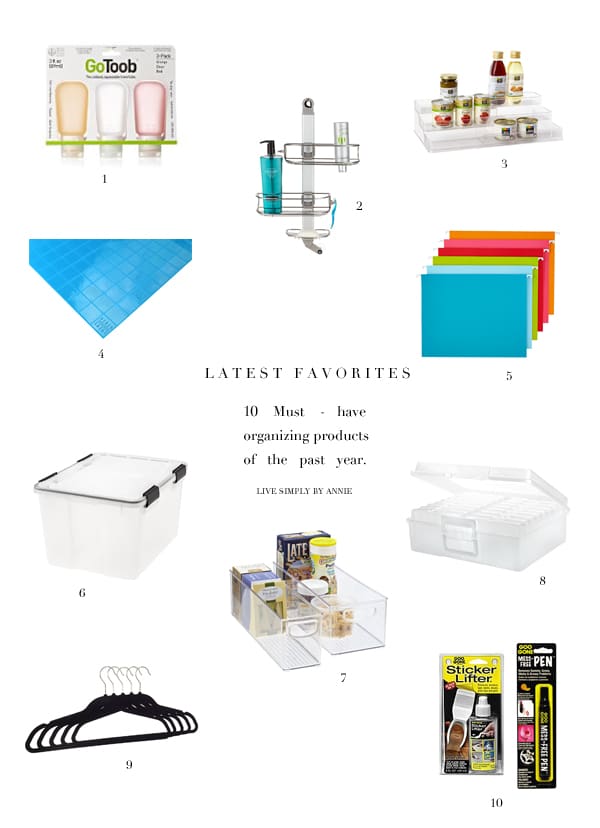 If you’re using any other travel-sized cosmetics containers you are wasting your time in my book. Actually wasting your products would be a much more accurate phrase.

The design of these is truly superior: made of one silicone piece that comes right up to the end of where the lid screws on, there is zero opportunity for leakage.

They also squeeze as if they were actually designed to do so, and some models feature suction cups so that you can stick them up where you please for added convenience (I haven’t used those, though it sounds ingenious).

Those cheap drug store airplane-approved bottles are hard plastic that don’t actually squeeze, meaning that if you put anything denser than water in them you’ll spend 40% of your vacation trying to bang your products out of them into the palm of your hand. Eventually you’ll throw in the towel and acquiesce yourself to the complimentary hotel cosmetics, at which point your having transported your own goods will be entirely negated. But, try putting anything resembling a liquid in them and they’ll leak all over your bag.

On my last trip, I took all GoToobs and one dumb travel bottle. By the end of the trip, I had wholly become a GoToob convert; my products within all squeezed easily out, while the lone 3oz dumby had 90% of its contents held hostage. I didn’t even bother toting that thing back home.

Get them, they’re worth every penny.

I’m partial to many aspects of this shower caddy, most obviously being the fact that the individual units can be adjusted vertically and horizontally.

The fact that it has hooks and holders for things like razors, toothbrushes, loofahs, et al is a definite bonus.

But it’s the subtle fact of how this organizer attaches to the shower head that earns my vote; whereas most shower caddies merely sit atop the showerhead, threatening to slip down out of place and cause a possibly pain-inflicting shampoo avalanche, this one gets securely screwed into place. No potential head injuries, and no sloppiness in the looks department, either.

This tiered rack has an edge above all others. No, I mean literally: it has an edge. Other tiered racks are merely platforms that your spices, cosmetics, etc., are expected to balance on. The edges of this version, on the other hand, help to keep small items in place. The fact that it’s expandable only adds to its value.

Now if only it could fit canned goods I would be a real cheerleader for the cause.

There is nothing else like this on the market, believe me. Line your drawers and then things inside stay in place. It’s like magic. Experience it to understand.

I’ve handed it to them previously and I will do so happily again now: The Container Store’s hanging files truly do out-perform all others on the market. Yes, they’re pricier than the standard box you can pick up at Depot Wherever, and yes, they’re also superior quality you can see and feel.

With their substantial weight and colors that don’t inherently repel the eyeballs, these hanging files just might convince you that filing is fun. Just kidding, you won’t ever think that. I know you. But I promise you’ll think it sucks less.

These weatherproof tubs are the only kind I use for my clients’ storage areas. They’re truly quality products, very, very seldom prone to breakage (I don’t think I can remember one ever breaking?) or cracking, which is more than I can say about lots of other plastic containers out there.

They’re also hefty enough to sufficiently support the content’s weight, while not being so heavy, themselves, that when filled a person with Herculean strength couldn’t lift them.

Their real shining moment is the lid and closure aspect: the inner rim of the lid has a kind of foam-like material in it so that it rests nicely atop the tub. And the latches ensure that the lid actually stays on, and protects what’s inside from the elements.

These are a godsend. Like God looked down upon man and said, “I see that I have created mad-deep drawers and cupboards and shelves and you all are not standing a chance at keeping them organized and so I shall send down Linus Deep Drawer Binz.” And then God did, and I saw that it was super good.

If you’ve been struggling to keep your deep storage spaces neat and utilize them to their full capacity, these are going to change your life. I’m hardly exaggerating.

They are my GO-TO for client drawers, shelves, cupboards, etc, that are anything beyond 13″ deep. As in, I don’t explore the options out there, shop around for what might help. I order these. Done, the end.

(I am equally as devoted, for the record, to the Linus pantry XL binz and the Linus pantry binz, though I will admit they could be substituted for another bin option, whereas the deep drawer binz Simply (yup) could not.)

This is photo organization, handled, in a product. The individual photo cases allow you to sort by category, year, theme, etc., and they all fit conveniently in an easily transportable carrier.

I feel this item almost goes without saying, though my knowledge of humans informs me that nothing goes without saying. These are a must. As in you must have them in your closet. All of them, for all the clothes you own that you hang up. I’m not particular on the color, nor the brand, but really, just get with the program on this one, okay? It’s almost 2015 now.

When you spend as much time as I do removing product labels, you begin to deeply appreciate things like Goo Gone pens and sticker lifters.

As recently mentioned, I have adopted the belief that pen is the form Goo Gone was meant to come in, all along. Because you want the oily substance in the exact spot you want it, not all over your hands, towels, and so on.

As for the Sticker Lifter, it might well be nicknamed the Nail Saver. It breaks eventually–the end begins to wear down, rendering it significantly less useful–but believe you me, I would much prefer having to replace a little plastic spatula every couple of months for under a ten-er than I would have to regularly sacrifice my nails. And that’s not a matter of vanity, for the record, but a preference for living a pain-free life.