Today I thought I’d share a recent client project with you all– I really do this guys, I swear. 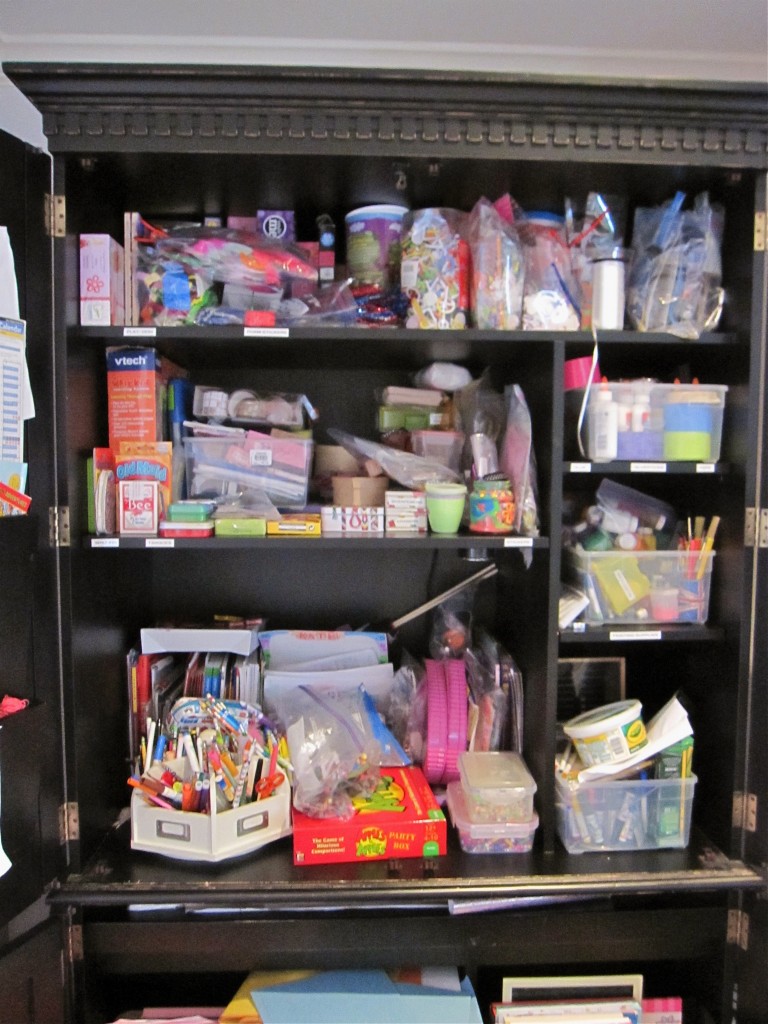 How did it get this way? The answer is two-fold: first, a steady stream of new supplies were brought in, while no items of equal quantity were edited out. This, as we know around here, is a sure-fire recipe for clutter. Need I call out the 1 in, 1 out rule?

Second, this cupboard was a classic case of the deep shelf-little-stuff predicament. These deep shelves can accomodate a great amount of stuff, and stuffed they were. Accessing things at the back would be a challenge for any fully grown adult, let alone a really cute little girl standing on her tippy toes and hoping beyond hope to find some feathers to glue on her construction paper picture. 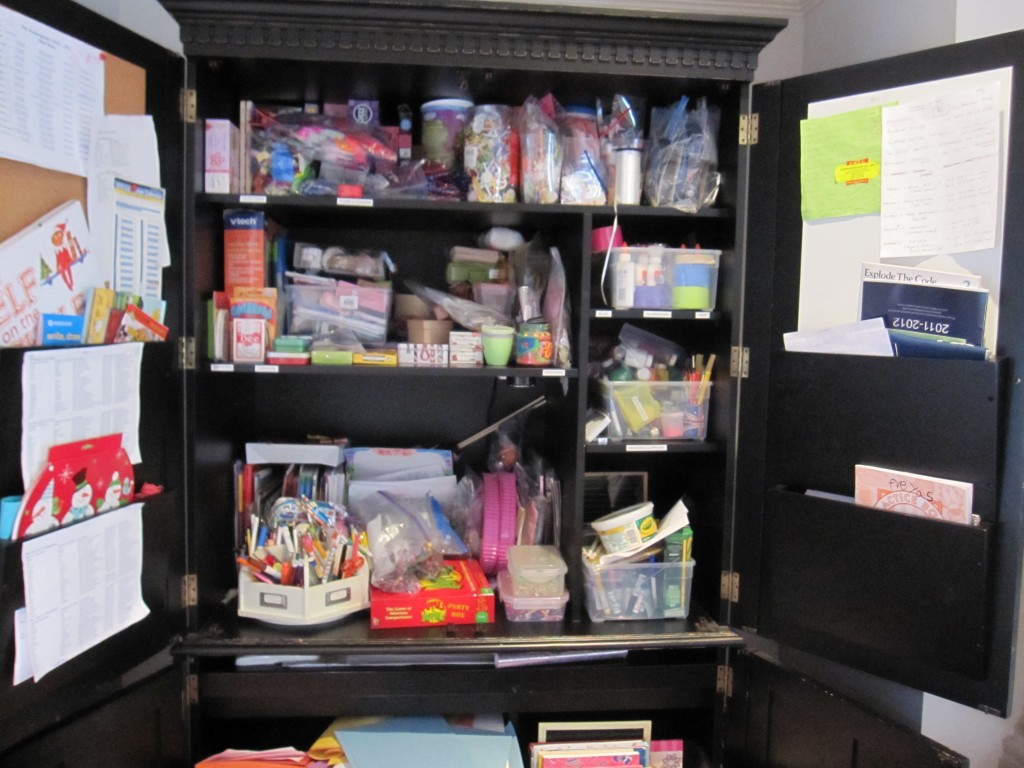 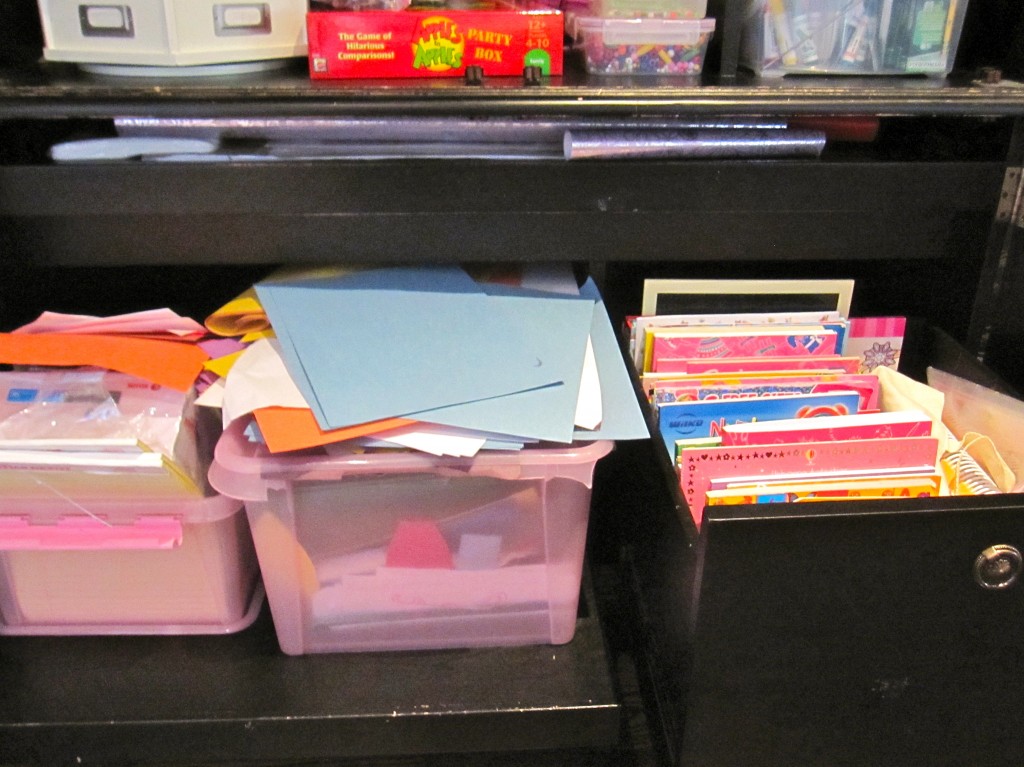 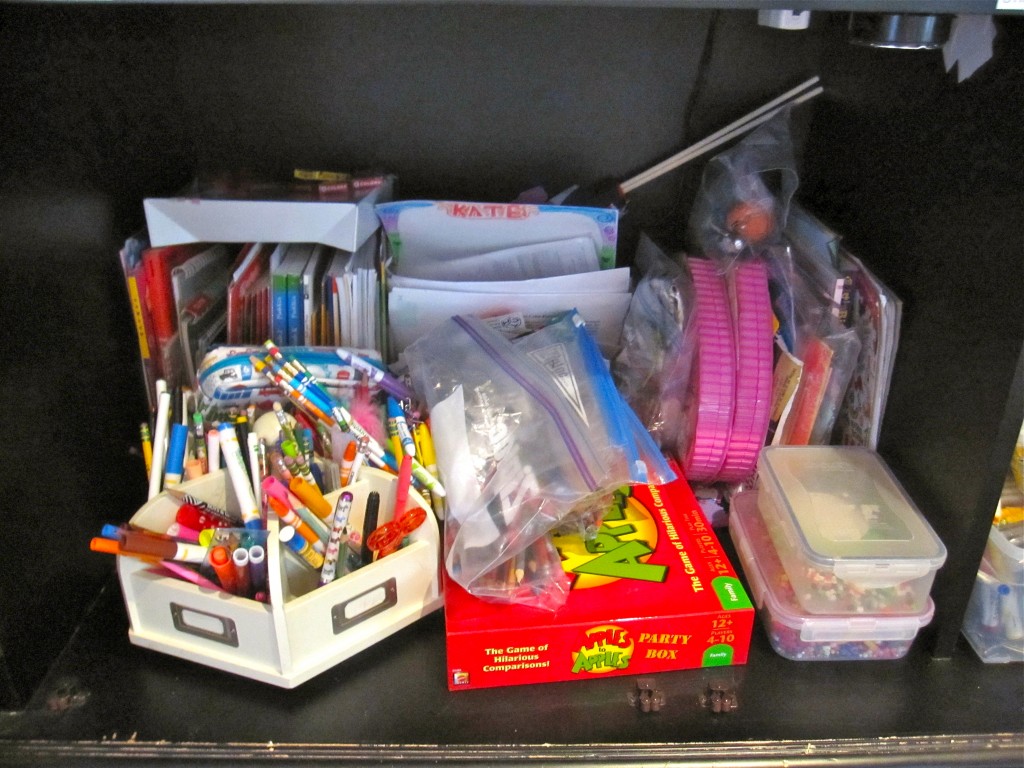 It was clear that there was just too much stuff, and that the supplies weren’t being stored in a way that made them accessible.

I spy a pack of pipe cleaners, two rolls of ribbon, one Old Maid, lots of stickers, one bag of stuffing… it’s fun, right? 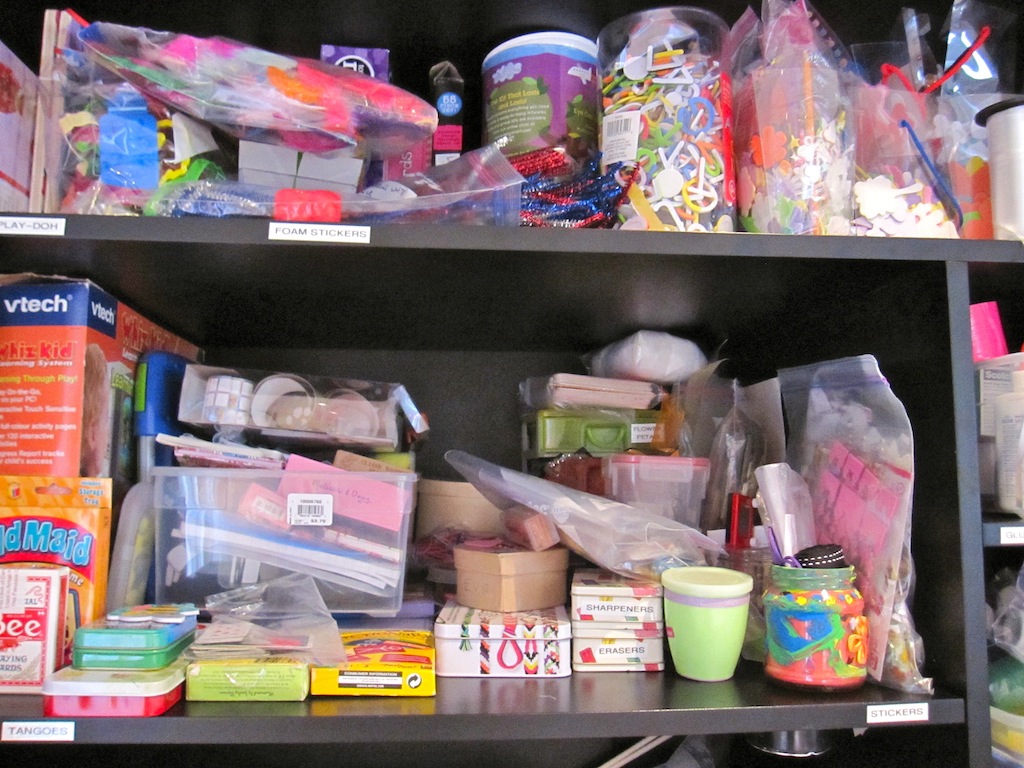 So here’s what I did:

Naturally the first step of any project is to clear everything out, sort through, and edit ruthlessly. By the end of the sort I was covered in glitter, my hands had acquired the faint scent of Play-Doh (which managed to linger for what seemed like days afterward), and we had weeded out a hero-sized amount of unnecessary goods (how many markers/activity books/ paper scraps/ sticker rolls/ paint brushes/ sparkly beads can two girls really use, you know?). 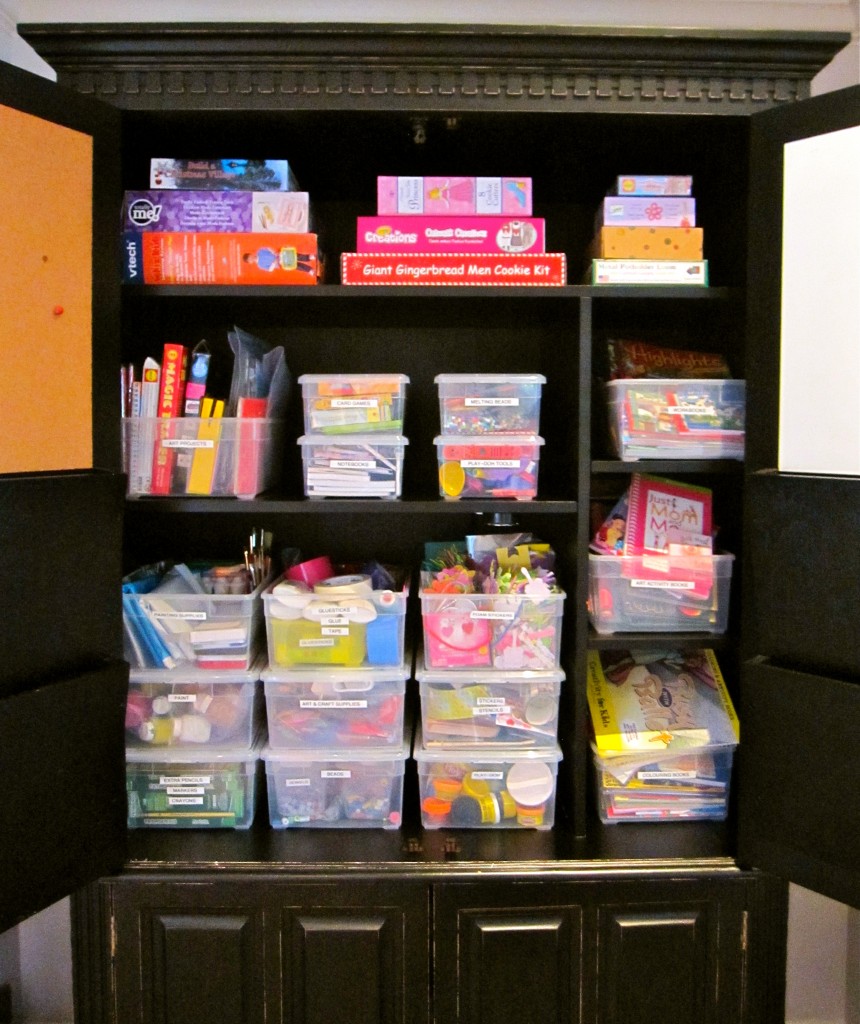 throughout her home. I decided to keep the streak going and use them once again to help tame the arts and crafts section. Just as I advised you all, I solved the deep shelf issue with the use of smaller containers, which makes everything mobile; even if it’s at the end of a box, and thus the far reaches of the cupboard, all the girls will have to do is pluck the box from the shelf, open it up, and boom, the world. 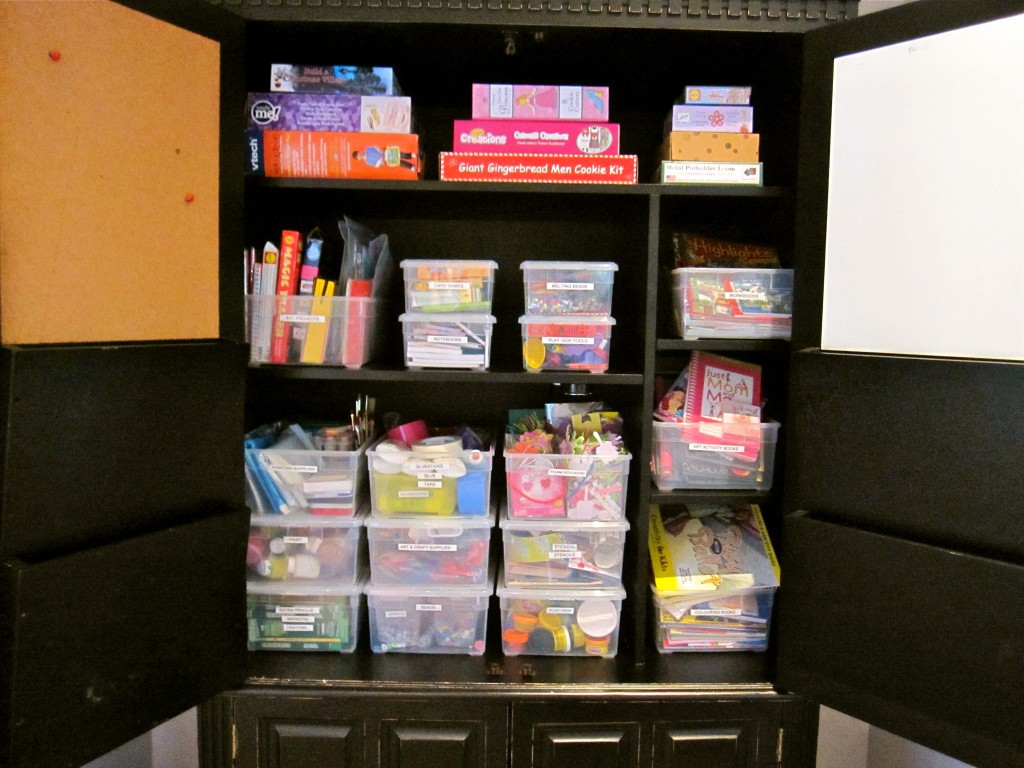 I sorted everything into categories, and ensured that each category had only one home. Formerly, there were many multiples of bags for the same kind of item, which lead to utter confusion and chaos. Unite my friends, unite. 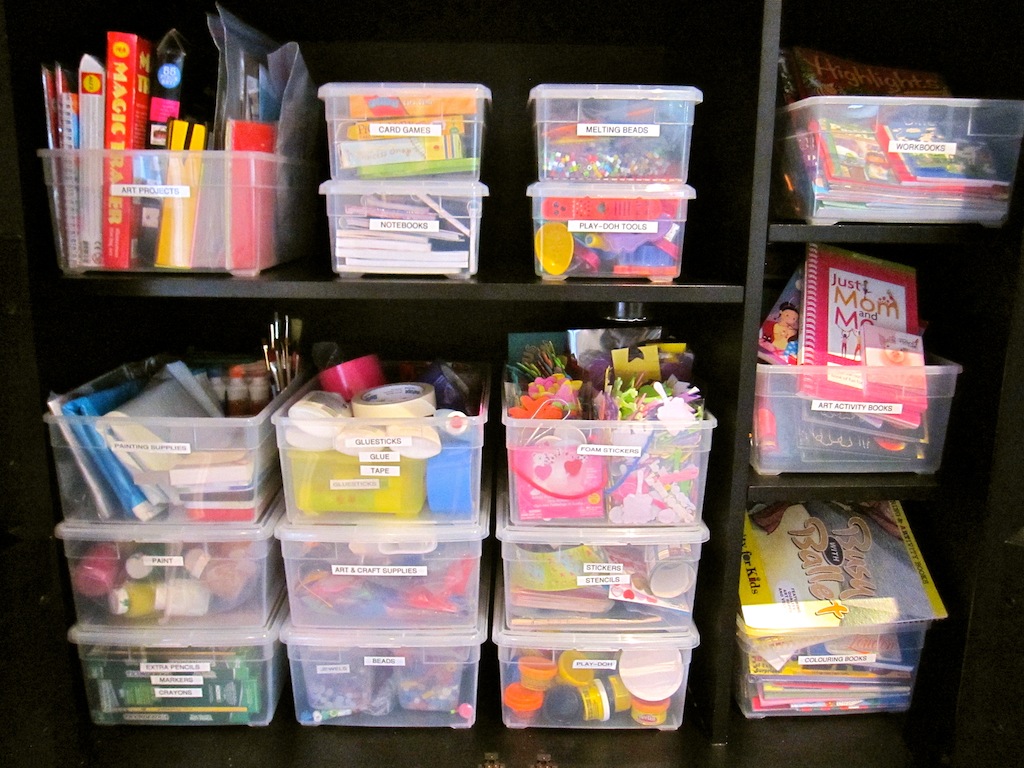 I’m always hesitant to use lids with children’s things– any chance you have to make getting into it and replacing it easier for the wee ones you should take– but in order to utilize the height of the shelves, I woud need to stack them, and thus, I would need to lid them. 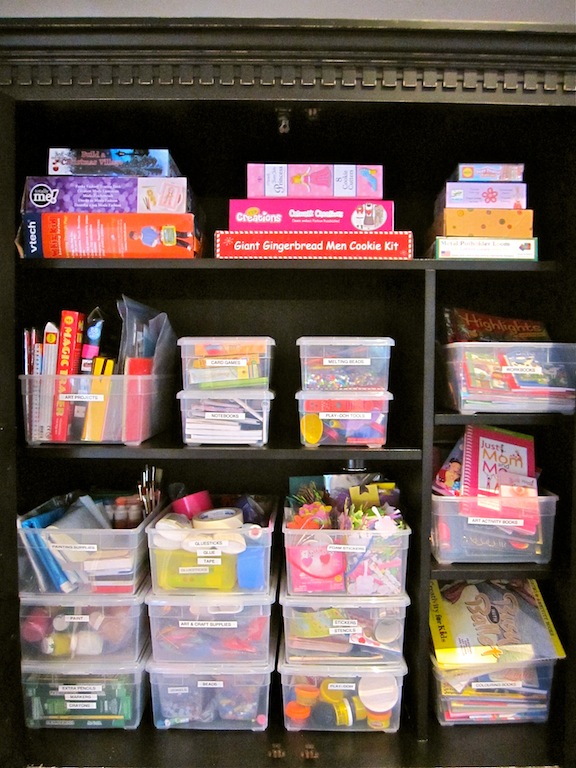 The solution was the old standby: prioritization of storage. My client advised me on which kinds of things her girls use constantly, and which they use on far rarer occasions. Then I stacked the bins according to frequency of use, so that the bins on the tops of the stacks contain the items the girls use almost daily. Better still, I made the top guns really accessible by leaving the lids off those. 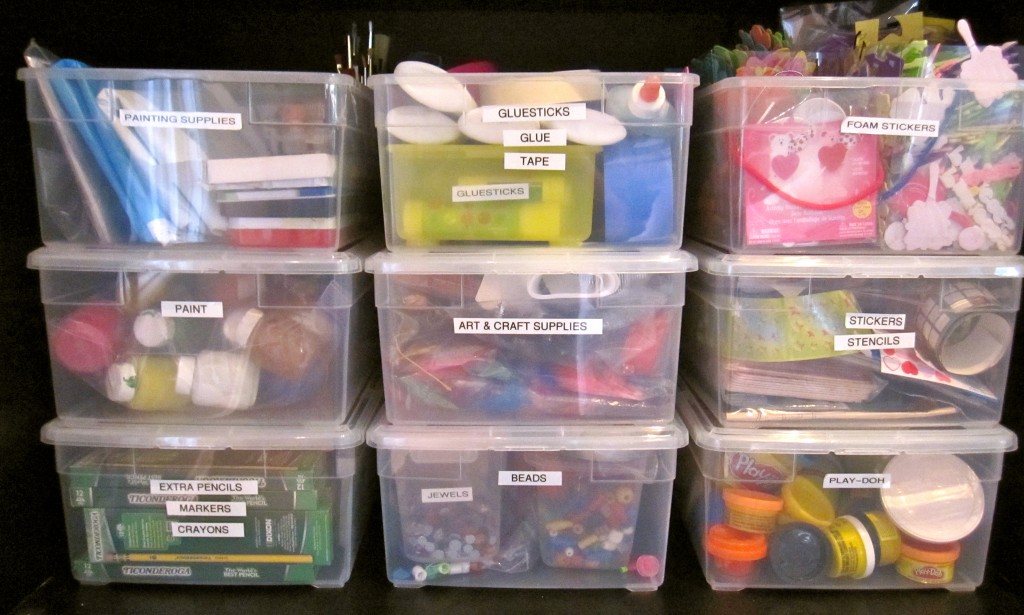 And of course, we labeled. 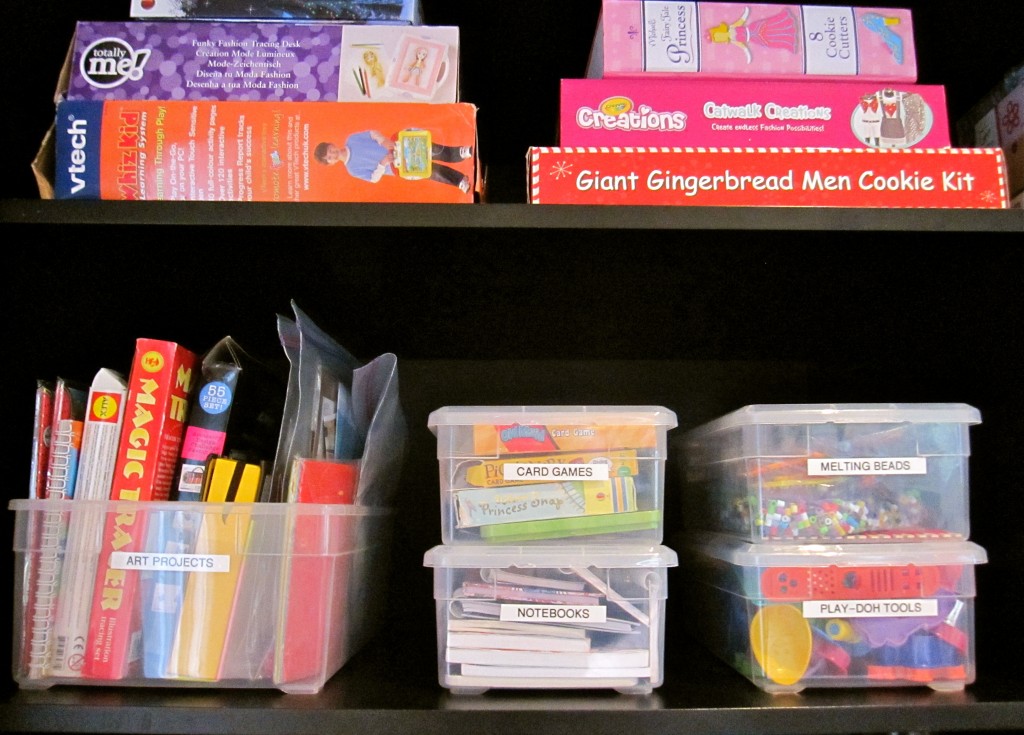 The girls have a caddy filled with an arsenal of drawing, coloring, and cutting tools which they use every day. The caddy gets removed from the cupboard, placed on the table, and the creativity commences. Problem was, accommodating this guy was a real pain in my arts; keeping it on the first shelf, as it had been before, meant interrupting all those uniform boxes, and didn’t allow as many to fit. Putting it up on the second shelf was a no-go, as we feared it would be too hard for the girls to retrieve without having everything crash all over the place (it’s quite heavy, those pencils add up, believe me). 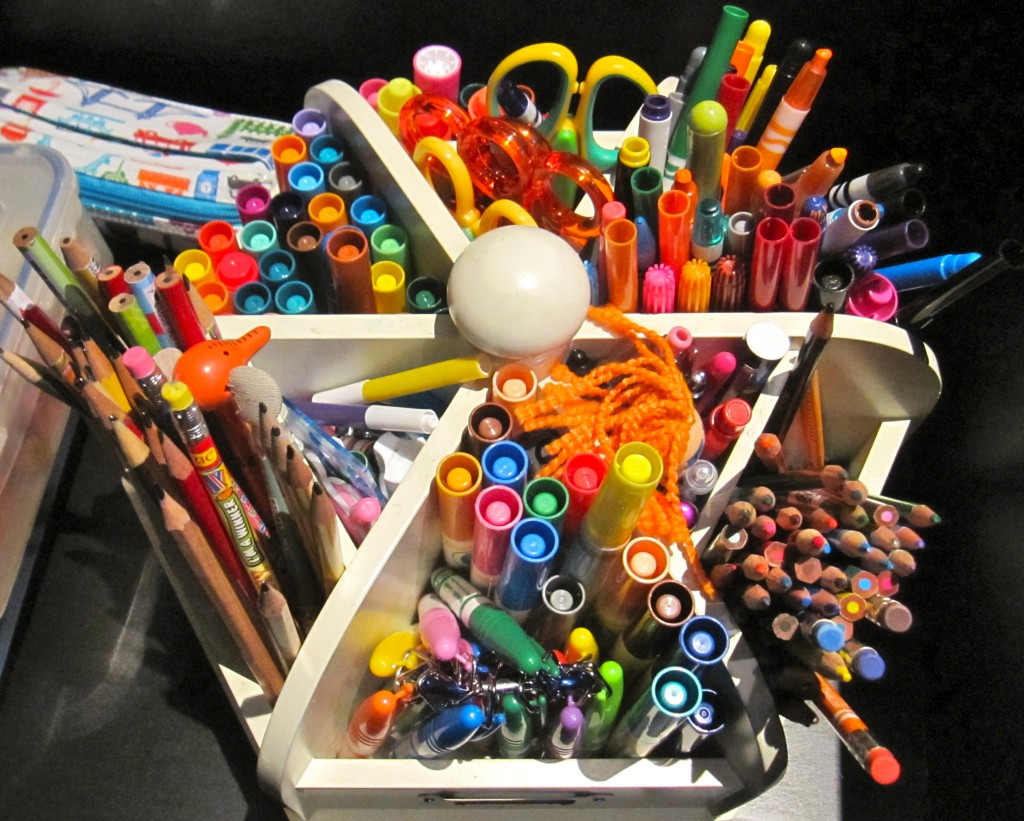 The solution was to give over the whole drawer at the bottom of the cupboard– a drawer that easily could have held more, but, as we’ve covered, just because you have the space doesn’t obligate you to fill it. We had successfully gotten rid of enough that we could afford to allocate that much space to the caddy. And the girls can easily open the drawer, and lift the caddy out of it.

We also HANDLED the paper situation, which was previously, well, you can refer back to the photo of this area above if you need reminding. I removed both lids, and made one bin for notepads and computer paper, and the other for construction paper. 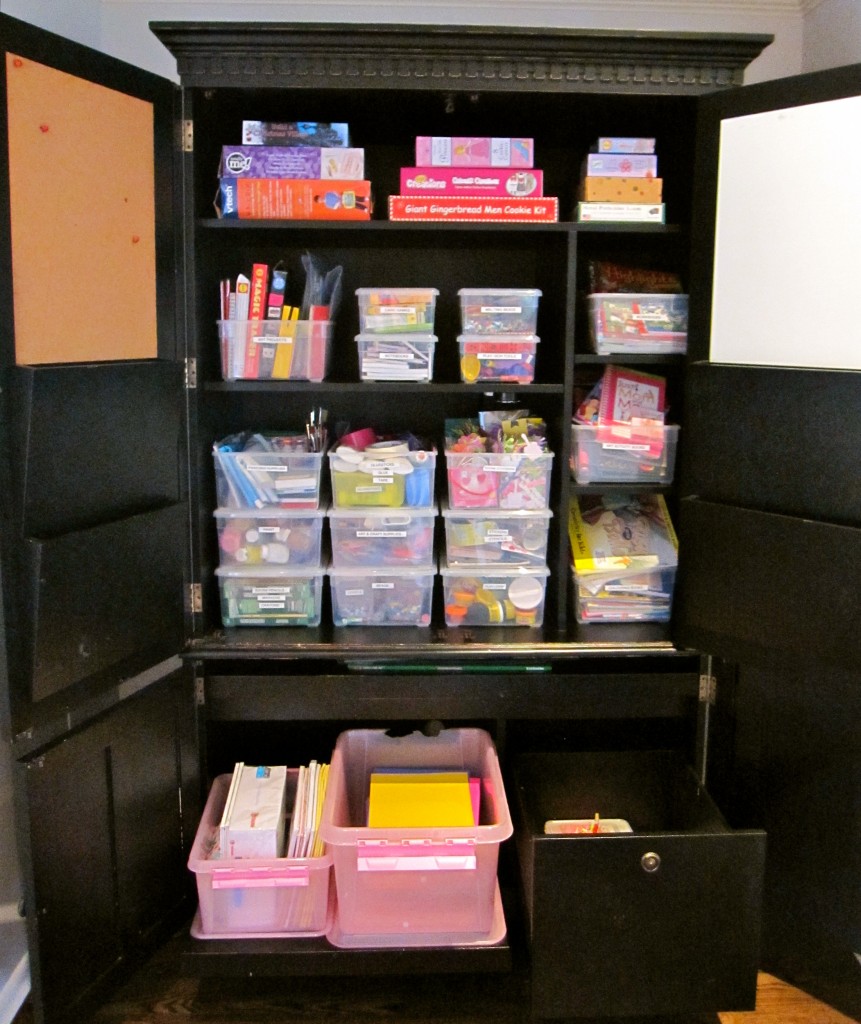 Now the girls have an arts & crafts cupboard that allows them to actually see everything they have, to access it all easily, and to make maintaing it a breeze.

K thanks for reading bye!