Monday’s Meditation: On The Perverse Effect 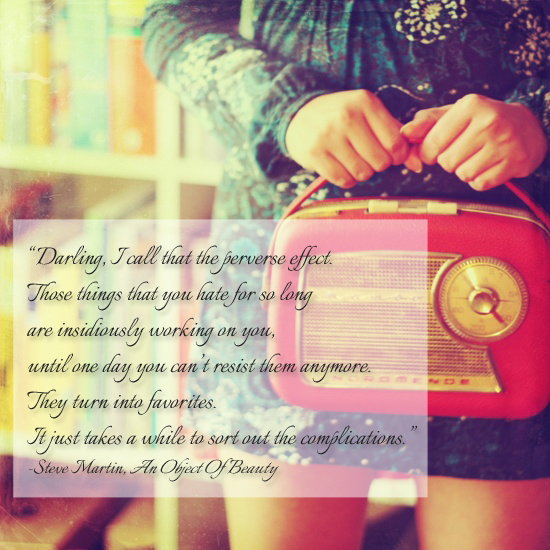 If there’s one thing I find particularly perplexing (not to mention annoying), it’s the fact that you can solidly dislike something—even feel repelled by it—upon first introduction and then, following repeated exposure, you discover yourself to be horribly, alarmingly enamored.

This phenomenon occurs regularly in daily life with regards to songs, fashion, food; How many of us have waited with anticipation to hear the latest musical offerings from our favorite artists, only to be left cringing in disappointment? “What a bad song,” we say. The second and third times the track plays aren’t much different, except on those occasions we begin to proclaim, “Uch, I hate that song.” Not five playbacks later, we’re belting out the lyrics in tandem, turning the volume dial like desperate addicts whenever we hear the hint of the opening notes.

The same goes for fashions, most of which burst onto the sartorial playing field to our complete detestation— a position we ardently cling to until the day we head to Zara to purchase the fad’s doppelganger, albeit the much more affordable copycat incarnation.

The first times we tasted adult delicacies such as wine, coffee, and dark chocolate were the same thing. Cut to: us, now— gorging ourselves on all three and promising they’re the finest things in life.

Friends and lovers, too, will later on in their relationships admit to having been reviled by the other initially.

How did it happen? How did we manage to, unbeknownst to ourselves, sojourn from point A—where A represents repugnance— to point B—where B stands for pathetically beside ourselves with affection?

At the crux of that mental shift lies the precarious commonality between love and hate; that both are varying expressions of the same force.

That which we initially feel indifferent to will rarely conjure up passion in us. Such things are easy, passable, and so being will never earn a place in our deeper subconscious.

Even when we feel vehemently opposed we are feeling. We have been excited and attracted to some element, an attraction which lures us in, causing us to continually engage with whatever that thing may be, to puzzle over it, to familiarize ourselves with it.

[It seems a rather ill advised idea to take on the philosophical conclusions of history’s scholars, but I would be so bold as to argue that familiarity does not necessary breed contempt. That furthermore, believing otherwise suggests an approach akin to that of a perpetual playboy. Life experience has taught me that adequately familiarizing yourself with anything is a crucial element towards your ability to truly appreciate it.]

Think about it: the recording of a song doesn’t change between our first and fifth exposures. It is merely that by the fifth playing, we have become familiar with it. When we played the track for the first time we couldn’t make sense of it. The composition of strange beats and unfamiliar vocal patterns sounded like noise. But, still, if there was some element that hooked us, then regardless of whether we detested it, it will have crept inside us and the process will have begun.

There is a whole lot out there for our minds to sort through. Infinity things. The difference in whether we will come to love anything depends upon our familiarizing ourselves with it. By encountering it again and again we are able to grow with it, grow towards it. That’s what transforms a once foreign entity into something we know intimately, something we imagine to be our own.