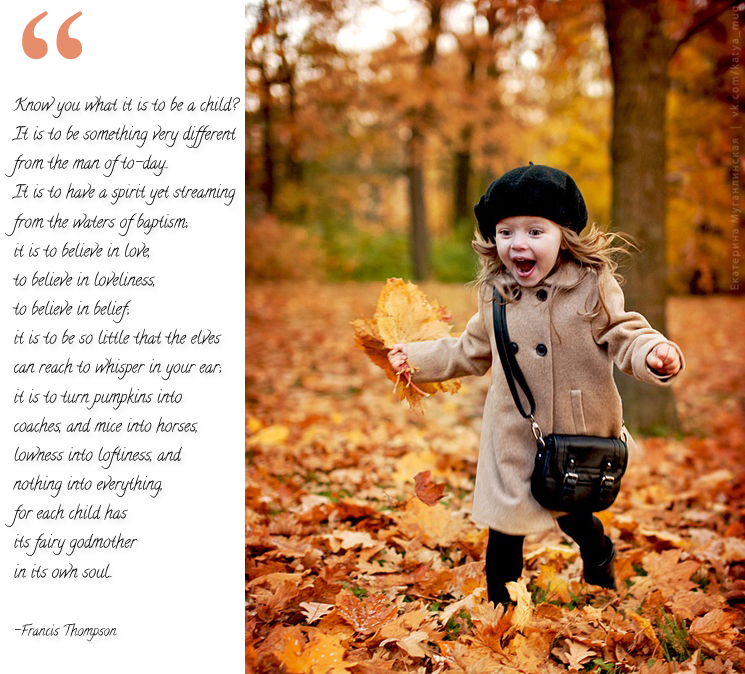 I’ve been thinking a great deal lately about the innocence of childhood and the loss of innocence, as I’m sure we all have been.

It’s difficult to articulate what exactly is so special about innocence or why it should be protected. To even describe innocence in words is a challenge: an ignorance purest in nature. A state of blissful unawareness. A time free from evil intent.

In truth, innocence is the real dividing line between a child and an adult– not these arbitrary milestones of age 18 or 21. Childhood is wholly intertwined in innocence, so much so that once it is shed, what remains cannot truly be thought of as a child. As soon as that protective film is lifted, an unalterable shift occurs within. Never again will the world be comprehended with the unsullied wonder with which it was previously.

Being given the chance to exist in such a state of innocence is perhaps one of the greatest privileges one can hope for in life. Those individuals who aren’t given sufficient time to awaken naturally, little by little, to the harsh realities of the world, those children who perhaps are the victims of abuse, who witness graphic and disturbing images on television and movies and video games, who experience a deeply horrific tragedy like a shooting at their school, those beings will always bear the mark of that robbery. Whether they use it for constructive measures in the future is irregardless; they will no doubt wish they could have lingered in their innocence longer than they did. We all do.

And so I say to parents everywhere, without children of my own but with prior knowledge of the time period (once being a child myself), protect your children’s innocence. Provide them with an environment in which they may evolve according to their own rhythms, in which they may become gradually more aware, rather than all at once. Be conscious of the images and conversations they absorb. Censor your speech when necessary. Do not rush them into our adult world because of your own fears and anxieties, but prolong at great lengths the amount of time they can develop in a realm where security, beauty, exploration and imagination reigns supreme.

All too soon they will join the ranks of the rest of us Informed. All too soon they will be sloughing their loathsome load, grimacing at boldfaced headlines, talking gruesome facts and politics over glasses of wine and ferrying around their worries in leather wallets and briefcases. It’s inevitable, after all.

But it doesn’t have to be today. It shouldn’t be today or tomorrow and I know that a contingency of parents in Connecticut are collectively wishing that their children could return to their prior state of un-knowing. That they are yearning for nothing other than to settle back into place the veil which was so irrevocably yanked aside from their fair children’s faces far too soon.

Do it for they who have lost the chance to, if that will help you. The time for informing will come if only you’d let it. Do not let the ingrained adult within you make you forget the sacredness of innocence. Do not forget that we are all existing on differing levels of awareness, and that everyone should be given the chance to. Do not forget that incomparable feeling of being a child: weightless, worry-less, filled with wonder. It is a precious commodity, innocence. Don’t let it go without a fight.