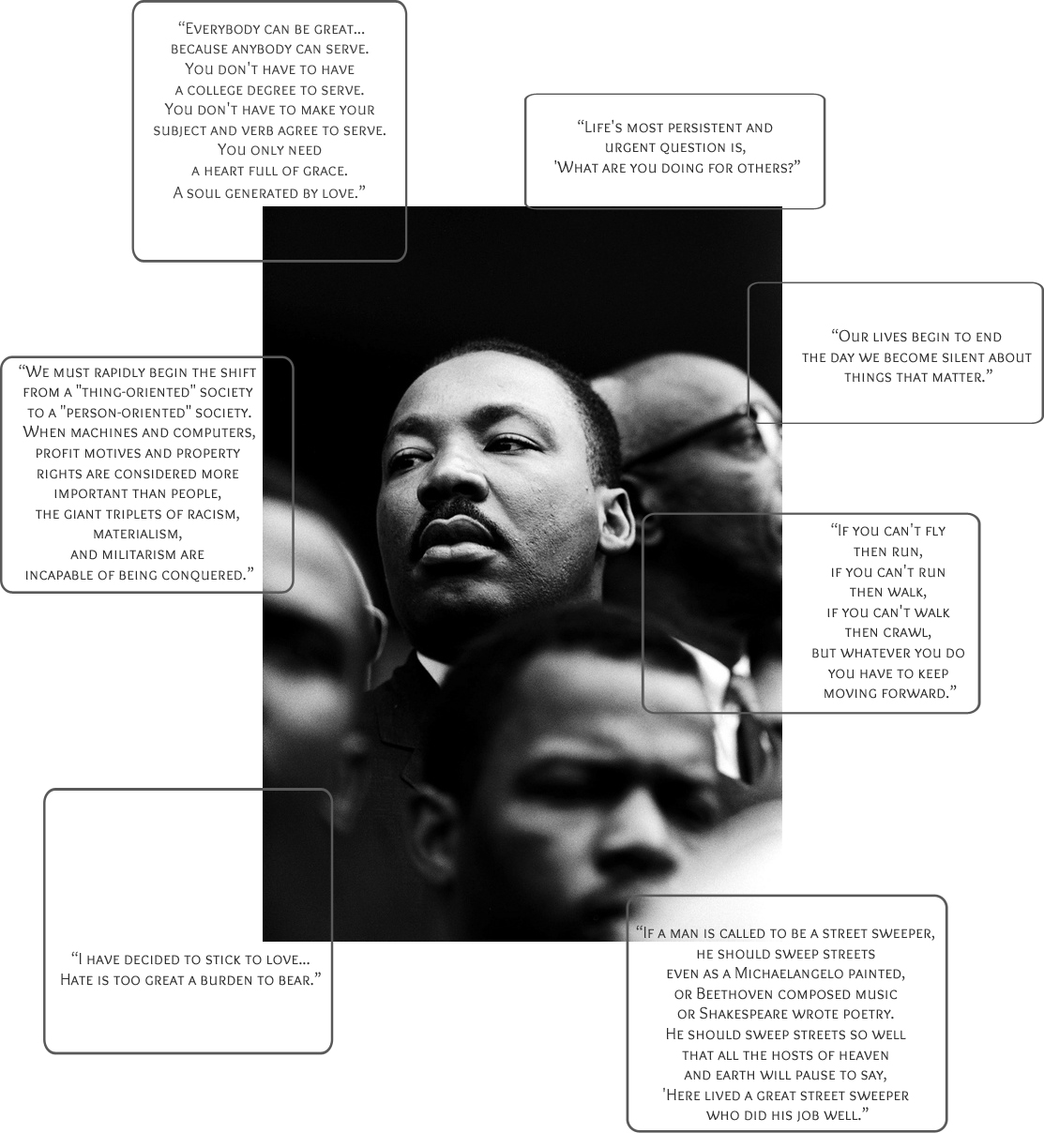 I sat down this past weekend as I do every weekend, ready to compose a meditation about the great Martin Luther King Jr. and I froze. I froze with the feeling of inability to adequately address the impact of the man for whom today is named.

Though I could certainly expound on the significance of social and racial equality, on the unwavering courage demonstrated by one pastor in the face of insurmountable obstacle and danger, though I could remind you all that each one of us is capable of changing our worlds if only we would be so bold as to raise our own voices in impassioned and virtuous proclamations of will, that each of us has been given a platform to do so by the sheer fact of having been given life– and that furthermore, the scale of one’s platform in comparison to that of the universe is of little import, that some of us have platforms as mini as blogs and others as large as national or global notoriety, but that each one of us must make use of whatever size platform we have in order to better and serve the world– though I could speak to you all about all those things, I cannot truly understand what it is to be a black person living in a white dominant society, nor to have been a black person suffering under the oppression of white terror.

“I remember that many years ago, when I was a smart ass home from first year of college, I was standing in the kitchen arguing with my father. My head was full of newly discovered political ideologies and black nationalism, and I had just read the Autobiography of Malcolm X, probably for the second time.

My father got really angry at me. It wasn’t that he disliked Malcolm X, but his point was that Malcolm X hadn’t accomplished anything as Dr. King had.

I was kind of sarcastic and asked something like, so what did Martin Luther King accomplish other than giving his “I have a dream speech.”

Before I tell you what my father told me, I want to digress. Because at this point in our amnesiac national existence, my question pretty much reflects the national civic religion view of what Dr. King accomplished. He gave this great speech. Or some people say, “he marched.”

At this point, I would like to remind everyone exactly what Martin Luther King did, and it wasn’t that he “marched” or gave a great speech.

My father told me with a sort of cold fury, “Dr. King ended the terror of living in the south.”

Please let this sink in and and take my word and the word of my late father on this. If you are a white person who has always lived in the U.S. and never under a brutal dictatorship, you probably don’t know what my father was talking about.

But this is what the great Dr. Martin Luther King accomplished. Not that he marched, nor that he gave speeches.

He ended the terror of living as a black person, especially in the south.

I’m guessing that most of you, especially those having come fresh from seeing “The Help,” may not understand what this was all about. But living in the south (and in parts of the mid west and in many ghettos of the north) was living under terrorism.

It wasn’t that black people had to use a separate drinking fountain or couldn’t sit at lunch counters, or had to sit in the back of the bus.

You really must disabuse yourself of this idea. Lunch counters and buses were crucial symbolic planes of struggle that the civil rights movement decided to use to dramatize the issue, but the main suffering in the south did not come from our inability to drink from the same fountain, ride in the front of the bus or eat lunch at Woolworth’s.

This constant low level dread of atavistic violence is what kept the system running. It made life miserable, stressful and terrifying for black people.

White people also occasionally tried black people, especially black men, for crimes for which they could not conceivably be guilty. With the willing participation of white women, they often accused black men of “assault,” which could be anything from rape to not taking off one’s hat, to “reckless eyeballing.”

This is going to sound awful and perhaps a stain on my late father’s memory, but when I was little, before the civil rights movement, my father taught me many, many humiliating practices in order to prevent the random, terroristic, berserk behavior of white people. The one I remember most is that when walking down the street in New York City side by side, hand in hand with my hero-father, if a white woman approached on the same sidewalk, I was to take off my hat and walk behind my father, because he had been taught in the south that black males for some reason were supposed to walk single file in the presence of any white lady.

This was just one of many humiliating practices we were taught to prevent white people from going berserk.

This is the climate of fear that Dr. King ended.

If you didn’t get taught such things, let alone experience them, I caution you against invoking the memory of Dr. King as though he belongs exclusively to you and not primarily to African Americans.

The question is, how did Dr. King do this — and of course, he didn’t do it alone.

(Of all the other civil rights leaders who helped Dr. King end this reign of terror, I think the most under appreciated is James Farmer, who founded the Congress of Racial Equality and was a leader of non-violent resistance, and taught the practices of non violent resistance.)

So what did they do?

They told us: — whatever you are most afraid of doing vis a vis white people, go do it. Go ahead down to city hall and try to register to vote, even if they say no, even if they take your name down.

Go ahead sit at that lunch counter. Sue the local school board. All things that most black people would have said back then, without exaggeration, were stark raving insane and would get you killed.

If we do it all together, we’ll be OK.

They made black people experience the worst of the worst, collectively, that white people could dish out, and discover that it wasn’t that bad. They taught black people how to take a beating — from the southern cops, from police dogs, from fire department hoses. They actually coached young people how to crouch, cover their heads with their arms and take the beating. They taught people how to go to jail, which terrified most decent people.

And you know what? The worst of the worst, wasn’t that bad.

Once people had been beaten, had dogs sicked on them, had fire hoses sprayed on them, and been thrown in jail, you know what happened?

That, my friends, is what ended the terrorism of the south. Confronting your worst fears, living through it, and breaking out in a deep throated freedom song. The jailers knew they had lost when they beat the crap out of these young Negroes and the jailed, beaten young people began to sing joyously, first in one town then in another. This is what the writer, James Baldwin, captured like no other writer of the era.

Please let this sink in. It wasn’t marches or speeches. It was taking a severe beating, surviving and realizing that our fears were mostly illusory and that we were free.

So yes, Dr. King had many other goals, many other more transcendent, non-racial, policy goals, goals that apply to white people too, like ending poverty, reducing the war like aspects of our foreign policy, promoting the New Deal goal of universal employment, and so on. But his main accomplishment was ending 200 years of racial terrorism, by getting black people to confront their fears. So please don’t tell me that Martin Luther King’s dream has not been achieved, unless you knew what racial terrorism was like back then and can make a convincing case you still feel it today. If you did not go through that transition, you’re not qualified to say that the dream was not accomplished.

That is what Dr. King did — not march, not give good speeches. He crisscrossed the south organizing people, helping them not be afraid, and encouraging them, like Gandhi did in India, to take the beating that they had been trying to avoid all their lives.

Once the beating was over, we were free.

It wasn’t the Civil Rights Act, or the Voting Rights Act or the Fair Housing Act that freed us. It was taking the beating and thereafter not being afraid.“