Monday’s Meditation: On Getting Unstuck 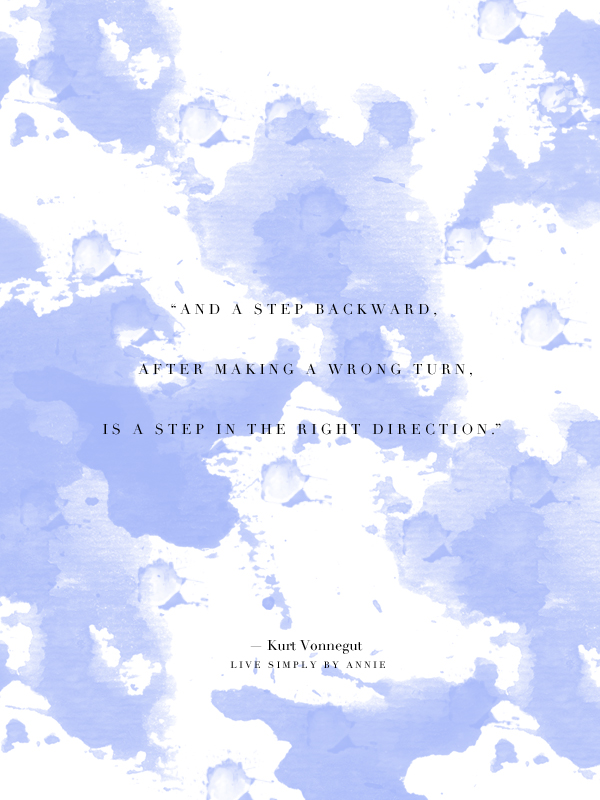 Here’s the post in which I turn a literal and finite event into an overarching metaphor for life. Yeehaw.

This past week I was driving with my family from Northern Michigan back to our home downstate. Plenty of feet of snow were already on the ground (it being Fargo and all) and at the moment of our departure it started snowing with a real sense of determination. Thick, wet flakes swirled in every direction, flapping against the windshield and cascading in diagonal lines in the air.

It was the kind of weather you really don’t want to be caravanning with your whole family in, the kind where turning on your brights leaves you more blind, since the wall of white only reflects the light right back at you. It was the perfect kind of weather for tragic accidents. And fortunate escapes.

I had felt the wheels lose traction instantaneously, the way you can sense immediately when anything gets off track, like a bone, or a conversation. The car slipped forward, then squiggled to the right, before careening in an arc back to the left. My sister was next to me in the passenger’s seat and my parents were in their car behind us and I was very aware of the truck that was ever so slightly behind me. It was all I could do to hold on.

By the time the car reached a dead stop far off the road with its tires swamped in deep snow I felt that overwhelming sick feeling where every cell in your body is bracing itself, for what it doesn’t know.

My dad pulled off and sprinted over to make sure we were still alive and it was all quite dramatic and harrowing, what with it being pitch black, and what with us being in the middle of nowhere in a blizzard and all. But by then we were fine, just stuck as ducks in the snow.

Something you might not know if you’ve never lived in Fargo is that when it comes to getting stuck or un-, if you want to drive forward, you’ve got to go in reverse.

Counterintuitive though it may feel, laying on the accelerator when you’re stuck in snow is hopeless. Those tires will turn and snow may be shredded, but aside from using up gas, you don’t progress.

No, the only way to get unstuck is to rock–for however long it may take–to go a little bit forward and a little bit back, sometimes with no sense at all that you’re actually making progress.

But the thing of it is, you rock back and forth long enough, and the distance your tires can travel in either direction begins to increase, and suddenly you’ve traveled out of the ditch and you’re back on the unplowed shoulder, where only a few more gear shifts stand between you and the freedom of the open road.

That’s, I think, a lot like how progress occurs in life; not all in one straight shot forward, but with consistent and complimentary efforts. In some way, you’re going to go backwards a bit before you can really fly.

Remember that reversing is a necessary part of the process, but only in so much as it facilitates your forward movement.

Little by little, you’re getting there. (You’re already there.)