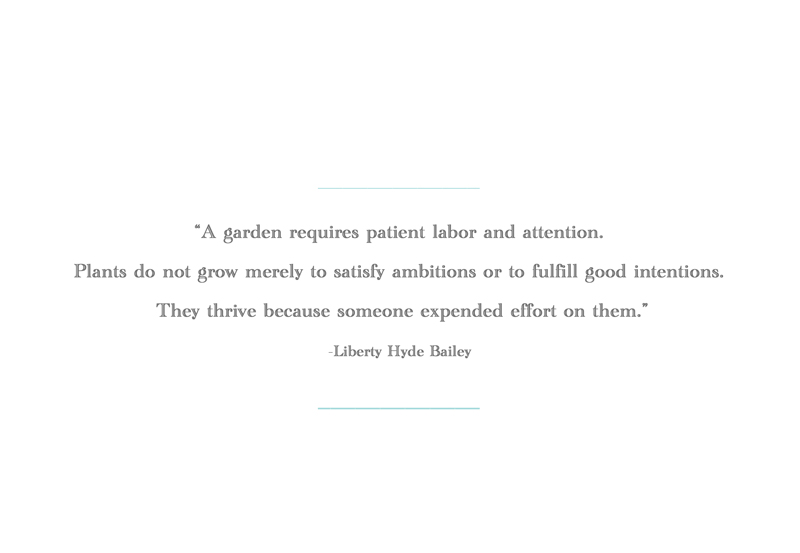 A garden, or rather the attention and maintenance a garden requires in order to prosper, in order to not die, seems an apt metaphor for so many things (indeed, when Seth Godin recently drew a parallel between gardens and business endeavors it felt fitting).

I’ve recently taken an interest in gardening, which is to say that, having finally expended considerable effort and money on my little garden, I ousted myself from the roost of indifference towards its state on which I had previously been leaning. Now, I find myself out there daily; picking stray–and ridiculously persistent–weeds, doling out generous drinks, checking things out, you know. Doing the things I imagine gardeners in real life do. The more time I spend hunched over out there, the more relevant I feel the garden as a metaphor becomes. 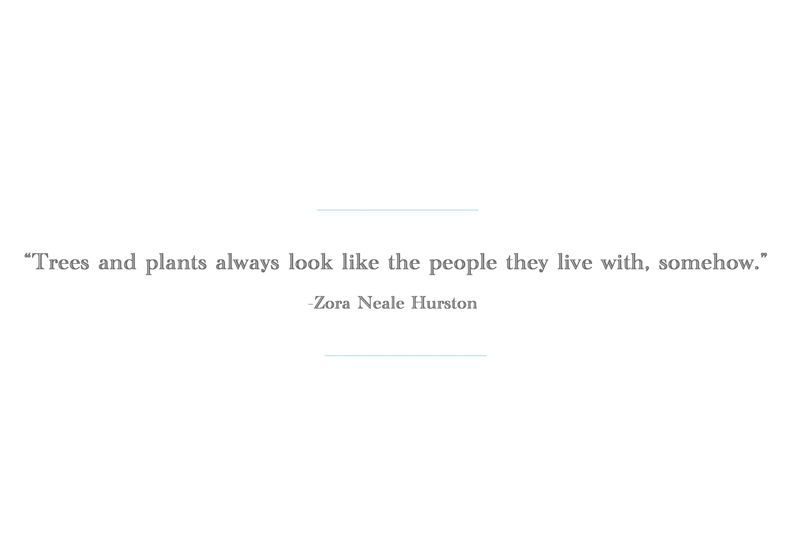 I’ve got a hunch about one side of my garden having more nutrient-rich soil than the other side (is that possible? Seems like it might be), as the plants on the grass-may-actually-be-greener end have been faring considerably better than their bed-fellows to the right. My problem side has been strugglin’ along, looking up at me every day like, “Do you really insist on not letting us die already?”

One plant in particular was having a hell of a time of it, its lush green leaves morphing into crumply brown ones at a rapid pace, and one at which I seemed powerless to stop. I stood over it a couple of weeks ago, studying. “Plant, you look pretty damn sad,” I told it.

I knew what needed to be done of course. I needed to crouch down in there and pick off all those dead and dying leaves. But I reasoned that if I did so, considering how many there were, I would be left with one naked bush.

And then I figured, what’s the point of keeping leaves just for the sake of having leaves? Isn’t that just about the dumbest?

The hesitation to prune the stagnant, spiritless, and defunct oftentimes originates not merely from a difficulty with parting, but from the fear of having to finally acknowledge the limited elements that remain. If we actually removed all the clothes that are clutter from our closets we would perhaps be left with so little–so few items that actually fit us well and make us feel good about ourselves when we wear them. That emptiness would surely make us feel empty, too. Better, at least, to have a closet full of clothes, we think. So we keep the leaves, the dead and the green, because at least then the plant is full, and we feel, we pretend, that quantity implies thriving abundance.

Such thinking is denial. It’s knowingly or unknowingly shrouding the truth. Perhaps we do only have a very few number of quality items, buried underneath all those extraneous layers meant to placate our desire for possession. But perhaps, too, those few things of quality are all we need. Or, all we need to build upon, to begin again. 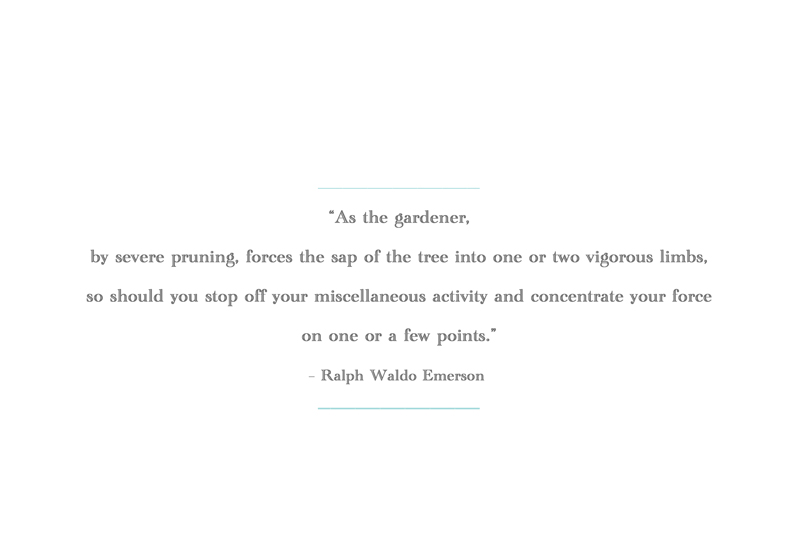 And so I squatted and pruned, sometimes one dead leaf at a time and sometimes whole branches at a time. And you know what? I was right. When I had finished that shrub looked naked as could be.

But what remained, little though there was, was green. Pliable, glossy, green-with-life leaves. They were few, but they were there, and that counted.

After that I just sort of kept an extra eye on the it, and sometimes I gave it some encouragement. “Come on little plant, you can do it” I’d say.

Well, you can guess how this story ends. In a matter of a few weeks–maybe two–that little plant had gone and sprouted a whole new bush-full of green leaves. It could have easily gone the other way, I’m sure of it. Had I given in to the fear of how bare it would look, that plant would have had to have gone on splitting its nutrients with fruitless neighbors. It would surely be dead right about now.

It took me paring down to the essential, living, thriving matter–of exposing just how limited that amount was, and deciding to temporarily be okay with that, with the hope and knowledge that in time the whole would benefit as a result–to rescue that plant. Pruned to its most vital parts, it finally got its chance to prosper.