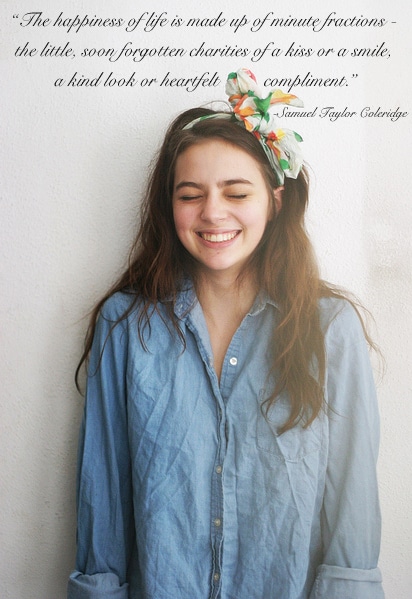 I have a thing for complimenting strangers. It’s one of the things I really enjoy in life, and also one of the many lessons passed on to me from my mom, who is the true master of stranger compliments (although she takes it one step further by referring back to the stranger days later. “Oh my gosh,” she’ll say, as if in a dream. “Eric’s coat was just so great.” And when you say, “Mom, who the hell’s Eric?” She’ll reply all exasperated, “The guy from that restaurant,” as if it’s the most preposterous thing in the world for you to have forgotten the 30 second encounter you only half heard above the din of the dining establishment, but I digress).

It goes like this: when you see a person who is in some way remarkable, beautiful, interesting, or well put together, you tell them you think as much about them.

For instance, while washing my hands in an airport restroom recently, I looked to my left and noticed a woman with the most beautiful hair color. It was the perfect shade of caramel, not too blond, not too brown, not too red, but sort of the intersection of all three, as caramel tends to be. It was the color I always wanted the highlights I got to be, back when I used to get highlights.

So, while the automatic soap dispensed a glop of foam into my palm, I said aloud, “Your hair color is beautiful.”

“Really?” She turned immediately from the sink to face me. “I actually just had it dyed.”

“Yeah, it was supposed to be ombre, but it’s not really,” she fussed with it a bit in the mirror. “You know when you just get it dyed and you’re just…eh, not sure?”

“Thank you so much for saying so!” She sounded, although I hate to give myself undue credit, as though I had dispelled the post-dye doubt. And then she collected her bag and walked out, and after waving my hands manically at the automatic towel dispenser for a whole minute yielding approximately six centimeters of towel, I did the same. It was nice. And I believe we both felt a little better afterwards.

My complimenting strangers is hardly restricted to airport bathrooms, either. I do this commonly, and whenever I believe a compliment is truly warranted. Last week I complimented my Starbucks barista on her glasses (thick, black frames, well suited to her face shape), and a couple days ago I told the saleswoman who helped me at Aritzia that she had beautiful eyes (blue, speckled, shone in the sunlight). I tell people all they time that their kid is cute (if they are), ditto for dogs. When I smell someone who’s wearing an especially lovely fragrance, I tell them they smell heavenly (although I never ask what it is because you just don’t do that), and if I see someone carrying a great bag I say, “great bag.”

It’s sort of fun, to deliver stranger compliments. There’s something  intrinsically thrilling in the act. Not massively, sky diving thrilling, but still. The moment before you give a stranger a compliment, there is always a flickering hesitation, a moment of nervousness about what you’re about to do and whether or not you have the guts to do it. Because “it” is crossing a boundary into the unknown. Or, more accurately, it’s bridging the distance between two people who don’t know each other by engaging with them in a manner normally native to intimate relationships. And that very fact, that the compliment is unexpected, causes it to be all the more delightful. I mean, whenever I’ve complimented strangers their faces have lit up!

Think about the times you’ve been complimented by a complete stranger. Admit it: you were, even for a moment, just a little bit elated. You were genuinely excited that someone who owed you nothing, who had no reason whatsoever to lie to you, or say anything at all to you for that matter, was so struck by your speech/your necklace/ your blog post (hashtag wink face or whatever)/ your shoes that they felt compelled to compliment you.