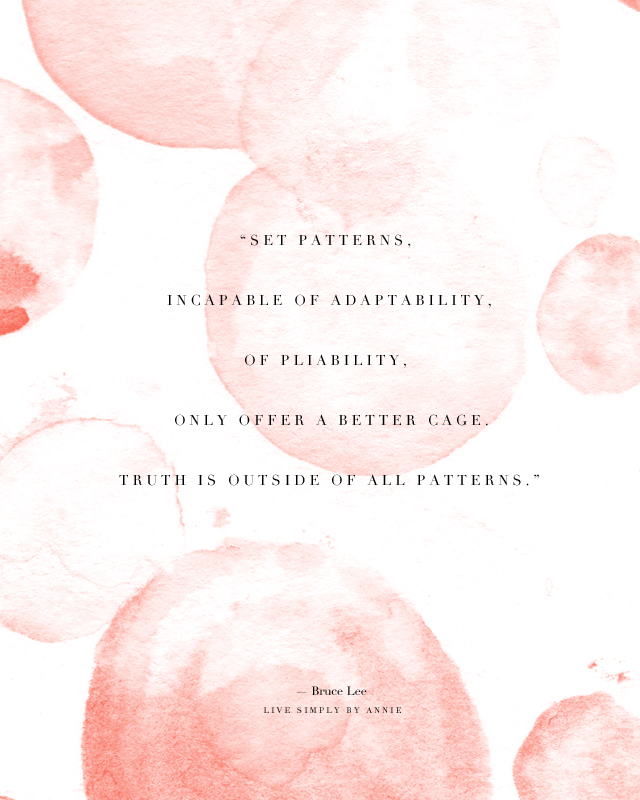 I stayed late at my client’s last Friday; late enough that her friends had begun trickling in one by one for a summer get together.

Around the table, which I was practically bribed to actually sit down at, a fantastic conversation was hatched. We talked about relationships, about the nature of people and life trajectories and parental approval. And we talked about patterns. The patterns that so frequently emerge from out of a biography, patterns that pivotally shape one’s evolution as a person.

That woman broke her pattern the night she got arrested for what was, she said, not her first DUI. And three months of jail time later, her pattern was clear to her. The link between trigger and result was obvious. She traded her cell for a room at a treatment facility and has been sober and thriving ever since.

Another talked about her pattern of playing peacemaker and of putting up with marital mistreatment that verged on abuse.

I told them about my pattern of forming fast friendships with unstable girls who sucked on my steady nature and left me feeling trapped and beholden.

Have you ever noticed how the existence and identification of a pattern is almost a negative?

A pattern is the route to trouble, a historical correlation of cause to unfortunate effect.

At the very least (or best) a pattern implies a falling into familiar, benign and mostly non-advantageous behaviors.

There’s something in the sameness of a pattern that reveals its ineffectiveness. It is doing the same thing over and over– responding in the same way to a similar situation as you did in the past–reaching back–falling into comfortable habits.

Life does not, it seems to me, reward this chain of sameness. Following by rote does not, after all, imply growth.

Miracles, on the other hand, are events that interrupt a pattern. They are moments and decisions that stand counter to what has been. They are flashes of innovation, and of intuitive pursuits of change.

When we’re just doing the same thing over and over; day after day, year after year, relationship after relationship, meal after meal, we are losing. Losing some of our precious vitality, losing the knowledge of our infinite possibility and capability.

Patterns are life on auto-pilot. And while they may allow us to coast, they are never where miracles occur. Those magical shifts happen only when we are present, when we suspend our egos enough to notice the unconscious repetitions of scenarios that we are willing to inevitably continue. Until, that is, we learn whatever it is we need to learn and open ourselves to new possibilities and quiet curiosities.