Monday’s Meditation: On How We Made Them Feel 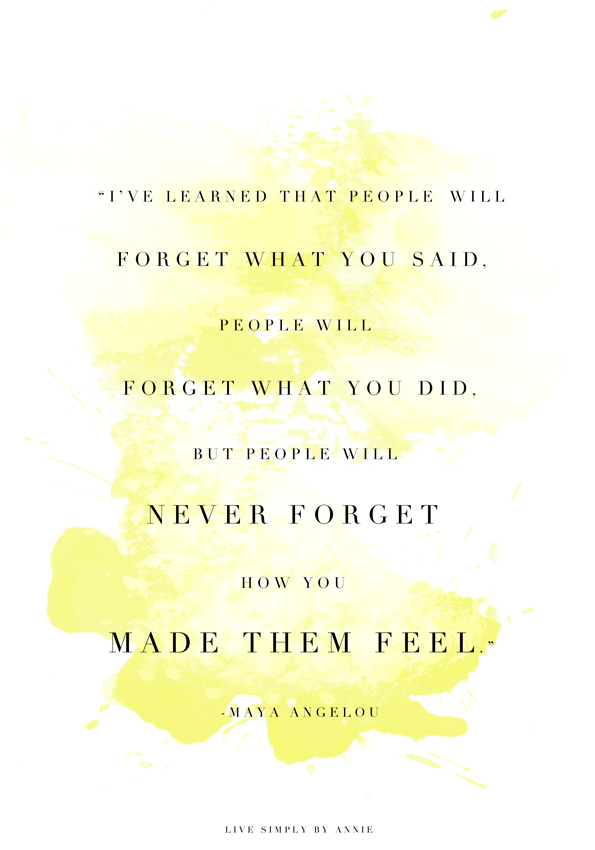 I took a meeting recently with someone I had never met before.

Now, I love people, and I’ve grown to love meeting new people. It’s one of the wonderful side effects of my work.

On the surface the meeting proceeded smoothly enough, but if I’m honest, I didn’t enjoy myself.

The lack of respect–lack of acknowledgment–I experienced from this person set me on edge. There was an air of unmistakable condescension coming from his way, and I felt as though I had been put on the spot, expected to perform–knowing all the while that each response I gave was being judged critically.

I went home and tried unsuccessfully to shake the feelings of doubt that had crept into my mind. I replayed the meeting over and over in my head, noticing each time moments where I must surely have dropped the ball, said the wrong thing, or looked like a buffoon.

One thing I’m very good at is giving myself pep talks, and around a couple of hours later, I finally insisted to myself that I get a grip.

Actually, it turned out that the more I picked it apart, the more I realized how unfair I was being to myself in retrospect.

I had been myself, after all, just as I always am: a confident person, keenly skilled in what I do, and committed most to giving love and spreading joy. Yet, in this person’s company, I happened to have felt vulnerable and unversed. Well, then, it sort of had to figure that my feelings were more a reaction to this man’s energy than they were my own.

I was responsible for how I reacted, I don’t deny that. It was my choice to shrink down into myself. But at the end of the day, wasn’t it on him that he had called up such feelings in me? Feelings that are so counter to my natural constitution? Wasn’t he (at least equally) responsible for how he had made me feel?

“You know? Turns out that yucky feeling I felt with that person said much more about them than it did about me.”

Those who acknowledge others, who treat others as though they are competent, and who act as though they want to believe the best in others, those are the ones to hang around with.

The ones who condescend? Who make otherwise confident people squirm in their boots? That’s on them. Don’t you (me) get it twisted.