Monday’s Meditation: On Being Creators and Re-Imagining 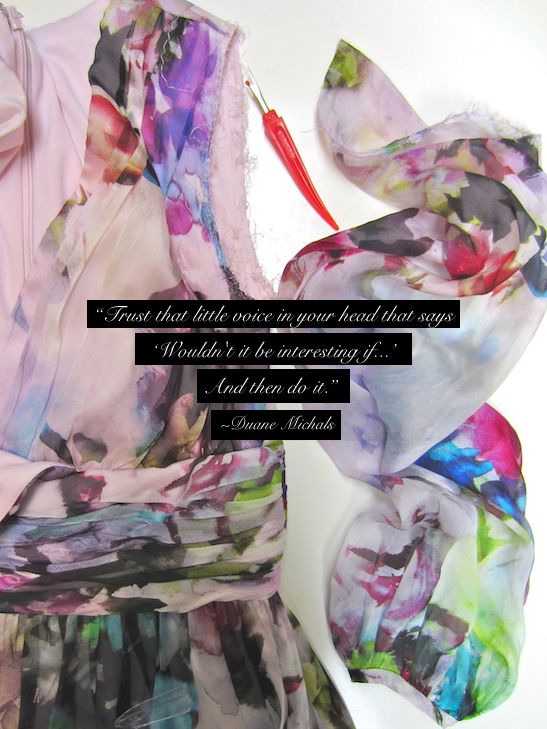 Sometimes I fear that the vast majority of us first world residents are so disconnected from the production process that we’ve become limited in our capacity to create.

After all, most of us aren’t surrounded by women sitting at looms, or workers busy on an assembly line. We are a nation of consumers. We move into fully constructed–sometimes fully furnished–houses. We buy dresses, not yards of fabric. Our knowledge of various entities is constrained to their completed stages. We don’t see the scraps, the thread, the nails, the nothing that came to be the something. [This is perhaps why a post like this IKEA hacks one impresses and inspires us all so, why the DIY blogging community is so exceptional, and so on.]

Because of that, we often forget that every created thing was deemed finished by its respective creator. That every creator has the right to continue altering until they’re adequately satisfied; the imagination of the creator is infinite.

We forget that the items we own, though they were “completed” by another, are still alterable. That we have chance to step into the role of creator and continue the production process until the item truly serves us.

Clothing is a fitting example, and one which I personally am in the habit of reimagining. Sweaters with exceptionally dull buttons, sleeved shirts I wish were sleeveless, dresses I wish were shorter–these are the stuff of my sartorial, creative experiments.

Concluding that in their current form, various garments are useless to me (and therefore prime candidates for the giveaway pile), I figure, what the heck: cut, stitch, replace, change. At the worst, my handiwork will result in a (not) hot mess, merely providing more proof of the fact that it’s really time to let go. At best, I’m left with the item of clothing that’s actually the way I wished it was, and which bares my own creative mark.

Your inclination to reimagine must not merely spawn from the the anxiety of having to let go–a back door escape route. In fact, if that’s what’s motivating you, then it’s probably important that you do get rid of it. The act of reimagining as only a creator can must be approached from a place of empowerment. “I will keep you,” you’ll say, “but only if I am able to alter you into exactly what I need and desire.”

And then do it. Not with the dismay of a consumer but with all the gusto of a creator.