Monday’s Meditation: On Shifting Focus From Negative To Positive 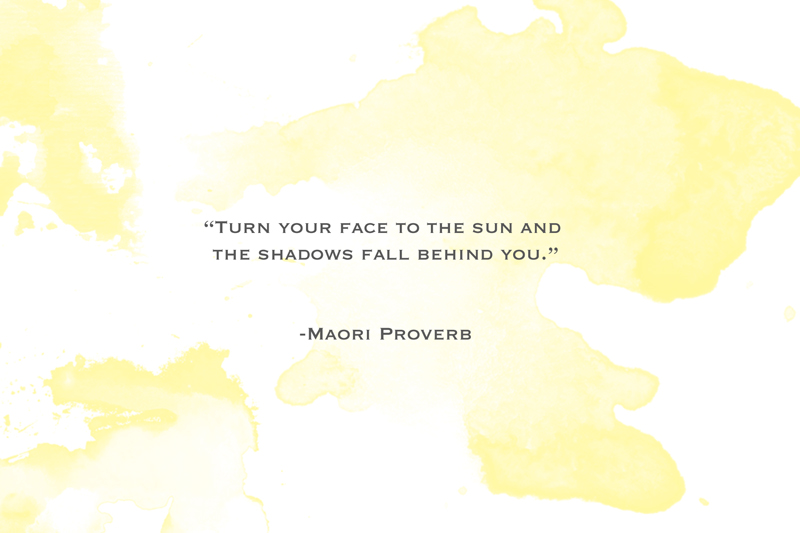 I want to tell you a story.

A few weeks ago, I was home in Detroit for my mom’s birthday. It was the morning of, which is the biggest moment there is birthday-wise in my family. My sister and I picked up my mom’s most favorite breakfast dish (arguably favorite dish, period)– a pecan waffle from the Original Pancake House, which is absolutely not to be confused with Original House of Pancakes.

The table wasn’t quite up to our previous birthday-table-standards, but, you know, there was a bow or two and there was the pecan waffle, after all. That waffle was sitting on the table all syrupy and pecan-y just waiting to be devoured. My mom pulled up tableside and licked her licks. She might have just barely raised her fork when there came a knock at the front door.

My dad hadn’t opened the door but an inch when in twaddled this stream of toxic energy, like the emotional equivalent of a high-pitched whining right in your ear that won’t quit. It was my mom’s sister, who, despite having a ridiculously strained relationship with my mom, wherein my mom’s all “I’m through being hurt and angered by you; kindly remove yourself from my life and don’t come over any day and also not on my birthday” remarkably still does, showing up sporadically to play the loving and doting sibling, flowers in hand and all. My dad asked this would-be aunt to step back outside while he talked with my mom.

My mom, who by now had long-since put down the forkful of waffle was called away from the table entirely and led into the living room where she was presented with the basically unsolvable decision of whether or not to see her own sister on her birthday. We had all gathered around her at this point, the drama of the moment being just about enough to knock some small farm animal unconscious for at least a couple minutes. Outside, her sister screamed obscenities about something or other. And then my mom, totally overwhelmed and halfway between a sibling set on a self-detonating timer that either had or had not yet exploded, and the pecan waffle that she had waited a whole year for, burst into tears, telling us that she didn’t know what to do.

In what can only be considered a cosmic intervention, right then a person came striding up to the back door. For a split second, I mistook her for my mom’s sister, gone to find another point of entry. Then I realized it was our neighbor, a woman whose children I played with so much growing up that she more closely resembled a parent with joint custody than some woman who happened to cohabit a suburban block. She let herself in the back door, and with her came this wave, this rush of fresh air into a stifled room. And so well, we naturally all moved to greet her because what else does one do when someone dear whom one hasn’t seen for a while enters one’s home?

We sort of forget about the person that may or may not still have been standing on the front porch then. My neighbor told my mom that she should go ahead and eat her waffle, and while she did, we sat at the table with her, the bunch of us swapping stories about where the kids all are now, and how everyone is doing. We laughed and reminisced and it felt wonderful.

Immediately afterwards and in the days that followed I couldn’t help commenting on how the entire scenario had been the universe at work in front of our eyes. I mean, at the moment when this gross presence intruded into our lives, so too had this gentle caring one. Oh, and the construction of it all–one force at the front door and one at the back, and the four of us caught somewhere in between– it was too exact to be considered an accident. It was all so perfect I wanted to kiss the universe for the remarkable way it makes its message clear:

For every bad, there is good to be focused on, instead, it told us. That it has an obligation to provide us with both as a means of differentiation, but that it will always let us reserve the right to choose which entity we give our attention to, and which we (literally or figuratively) invite into our homes. And probably too, that we aught not to worry so much, because whenever some hostile shit crosses our path, we have only to count the seconds before joy rushes in again–to balance the scales, to fortify our resolve, to restore our faith in love.