Monday’s Meditation: On Every Human Interaction 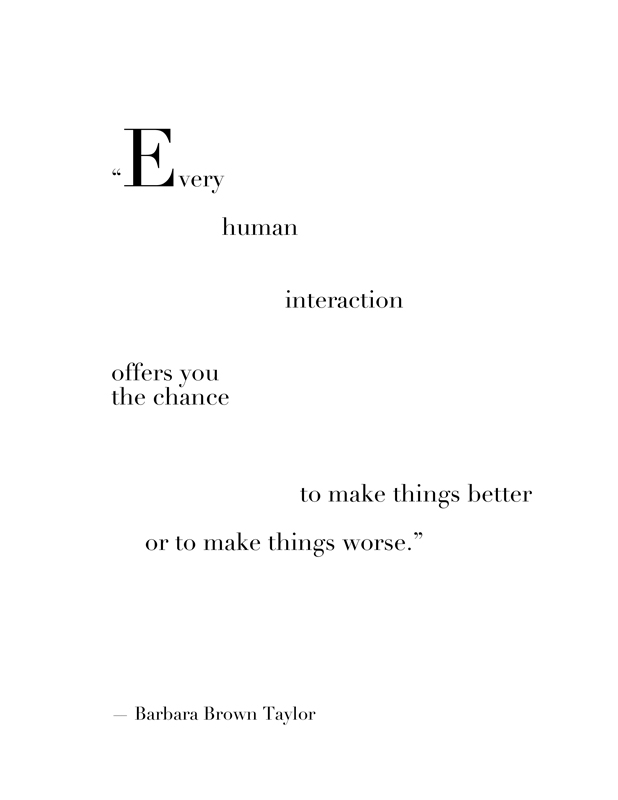 I live around the corner from a grocery store, which is a great convenience. That the grocery store contains a Starbucks is besides the point, but necessarily increases the amount I frequent said store.

Anyhow, there’s a man who stands outside the place. He’s there every day, selling Real Change newspapers.

There are a few scenarios wherein it feels especially strange to be especially fortunate–in the presence of those not as fortunate–and trotting into a grocery store with a shiny plastic card nestled safely in the confines of my carefully selected black leather wallet, and then back out again with robust bags of food, all directly under the nose of a man who is, at best, economically struggling, and, at worst, homeless, is certainly one of them.

So this man outside my grocery store; I started to resent his presence. I would round the corner and there he would be, and internally my thoughts would go, “Really? Do you have to be standing here today? Today when I feel so blessed I could skip to the produce station? Can’t you go somewhere else? Don’t you know how guilty you make me feel?”

It was only recently that I had a realization about this man–he has never actually asked me for a single thing. Not even offered me the newspaper he sells. Not once. Here’s what he does do: every single time I walk past him into the store he greets me, “Good morning,” his words have this sweet lilting quality to them. And when I walk out? “Have a nice day,” he kind of sing-songs.

When this realization hit, so too, did the notion that my resenting his presence was probably the summation of everything that’s wrong with the world. Was I that jaded? That unable to see that he was just another human being, extending an opportunity to spread joy by way of a friendly greeting? How could I have missed that the scenario was almost the complete opposite of how I had been imagining it: he wasn’t asking me to give to him, he was giving to me! What was my problem, anyway?

And just like that, my whole outlook on my grocery man shifted. He is rather like a blessing in my day. He is someone on whom I can count for a miniature blast of good energy. Now, I round the corner hoping to see him standing there. I look forward to our interactions.

There is goodness in all people, and all people have come into our lives to bless us in various ways. Even those whose presence is minimal. Every interaction with every person is an opportunity to heal the world.