So a couple of months ago I was in Target, purchasing goods for my new Seattle pad. And I was all, “I need a vacuum, hey, this one looks good and it’s on sale” (maybe it was around $40?).  The red flags were flapping in my face, flags as red as the miserable appliance itself, and yet somehow I managed to miss them.

See, I knew that all I really needed was a hand-vac. But I was attracted to the fact that this one could also double as a legitimate vacuum cleaner being that it was an upright and had floor suction. I figured I was getting both. Turns out, I wasn’t. 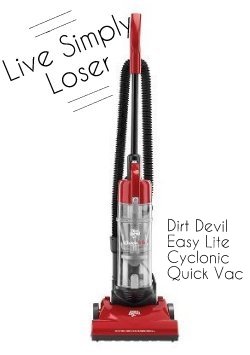 After giving the Devil ample opportunities to prove itself, here’s what I’ve concluded: the floor suction doesn’t suck. It sucks. I mean, here’s you, approaching that pile on the floor of crumbs and dried up leaf shrivels with the vacuum, and there you go back and forth like a good housekeeper over the dirt, and oops, there go all the crumbs and debris, being spewed out all across the floor. This vacuum isn’t a vacuum, it’s a fan!

The good news is the hose attachment does work. It successfully navigates small corners and crevices and picks up crumbs and dirt. The bad news is my back.

Let’s review: using the hose is the only way this vacuum vacuums so you have to use the hose. Except the hose is still connected to the upright body, and it’s maybe a foot long. Are you with me?

So basically, in order to keep my floors clean with this thing I have to drag around this cumbersome and entirely useless body in one hand, while doubling over far enough so that my other hand can reach the ground with the hose. Picture an upside down U and that’s me vacuuming. It’s inhumane I tell you.

Well, yes. I suppose I did. Did I expect it to perform like a top of the line model would? Certainly not. I didn’t expect it to move as smoothly, to be as quiet or as lightweight as pricier vacuums. I did, however, expect it to vacuum. I expected (expect) that when a company manufactures an item meant to perform a task, it be capable of performing that task. This isn’t really subjective either. We’re not talking about the contested efficiency of a skin perfecter’s ability to visibility brighten and tighten your pores. We’re talking, is the dirt on the floor sucked up or is it still there?

So that’s that, alas alack.