Welcome To The Age Of Digital Hoarding

There’s a solution to the stress of decluttering that’s become more and more common. Faced with the anxiety and fear of letting go of a physical item, well-intentioned people suggest, “just take a picture of it!”

I don’t tend to fight this battle because on the whole it seems minor in comparison to the other concepts I’m committed to promoting. I haven’t taken issue with this strategy up until this point because what’s troubling about it to me is more so the principle than the practice, which most people are understandably (I mean, I get it; hardly anyone is as obsessed with this conversation as I am) unconcerned with.

And yet it’s a tendency that I foresee becoming a much bigger problem with time. 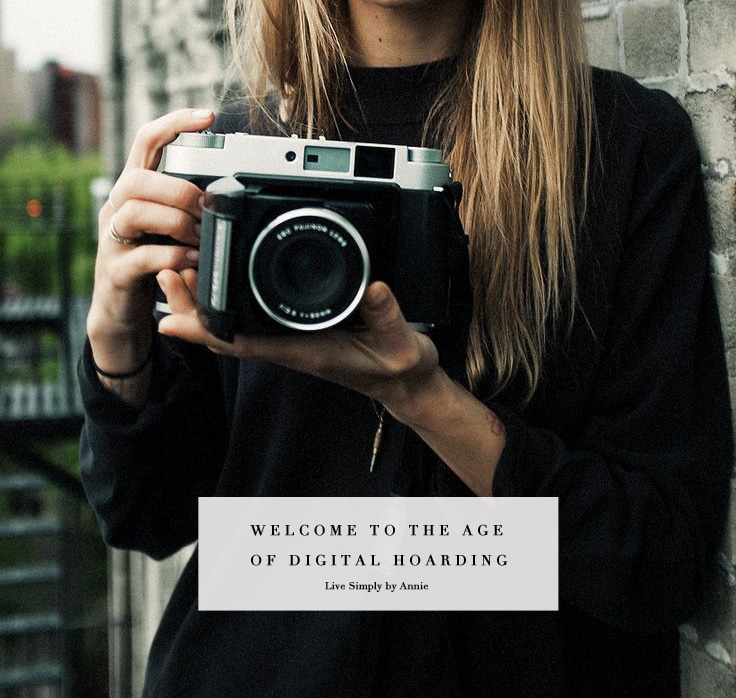 Most people would argue that the two are inherently different; the digital world is dimensionless and the physical is sitting in your basement horrifying you with its expansiveness. But the allure of the digital’s compact infinitude means that the tendency to save in such a form is increasing. Where their parents may have kept papers they’d never look at, books they’d never read, supplies they’d never use (but they could have, they still might), millennials are filling up hard drive after hard drive with photos they’ll never look at, files they’ll never read, and data they’ll never refer to, (but they could, they might). They think themselves new, think themselves innovative and free as compared to their parents. And perhaps they are, in a way. Yet what seems carefree is in fact a pseudo free pass to indiscriminately keep more than what’s necessary–just as much, that is, as anyone who came before them who never owned a laptop.

The culture of consumerism continues to rise in prevalence. Marketing and advertising have become so engrained in daily life it’s becoming nearly impossible to recognize it as that (which is, of course, the point). And while our culture may be shifting from a predominantly physical to a virtual realm, the behavior of collecting and saving remains heartily in tact.

I know a lot of you are going, “Ummmm, haha, not it’s not. Photos don’t take up any space.”

But to make that argument is to miss the point.

What’s important first and foremost is to cultivate the capability to process and clarify priorities and be able to let go, full stop. To understand that saving everything and every thing linked to a memory isn’t only not necessary, but ultimately detrimental to the memories and things that matter most.

Let me put this in no uncertain terms: if the only way you’re able to coax yourself into passing something on is to photograph it first you are in trouble. You are in trouble because you’re deluding yourself into thinking you are letting go. You aren’t putting your trust in your own judgment or in reality. You’re staying in a realm of anxiety and worry in which you need the insurance policy of a photo of the thing. You’re still keeping it, you see?

Just as you aren’t ever going to use that thing you don’t want and need, so are you never going to look at the photo of it. And the more things you’re doing this with, the lesser the chances you’ll ever review the photos easily later on.

Virtualizing is one type of storage, just as using a storage bin is. It is to be used only after you’ve gone through the process of editing and decided what you want to keep. Then you’re ready to have the conversation of how you want to keep it. If at that point your choice is to scan, photograph it and then ditch the physical item, and you have a fairly organized photo cataloging system in place, then hurrah.

But if you’re using photographing things as a way to preserve everything first, you are inevitably heading towards a sizable amount of virtual clutter. It might take up less space, it might be easier to throw in a drawer, but the underlying thought process and mindset will not have changed, and you will in metaphorical terms be in the same place as when you started out.

There is still no knowing what will be important to you years down the line. That feels scary to many of you and I get that. And that’s still never a good reason to keep anything. Because we can’t know. We don’t know how any of this will turn out in the end. All we can do at any moment is to make the choice that feels the most life-giving and well-informed. And then put our trust in the universe to guide us ever gracefully and to provide for our needs eternally.