Why Buying In Bulk Is A Big Mistake

My clients are in the habit of buying many things of the same kind in a short span of time. Have you ever done this?

They’ll fall in love with a certain style of t-shirt, and then buy twelve more exactly like it. Or they’ll decide they want to take up cooking, buy 1 cookbook, and then the next day buy 3 more, and then 2 weeks later, 5 more. Or they’ll get into a short-term pattern of buying nail polishes, drugstore lip sticks, or headbands. Or, they’ll decide they’re going to start drinking tea regularly, and then buy enough to fill a small grocery aisle, all within a month.

Since they’re so digging whatever it is they’ve purchased, they figure they might as well go ahead and buy a whole bunch more. So they have options. So they won’t find themselves without (that old ugly monster fear of scarcity again). And mostly, because they can’t imagine a time when they won’t be totally and utterly obsessed with whatever purchase it is. 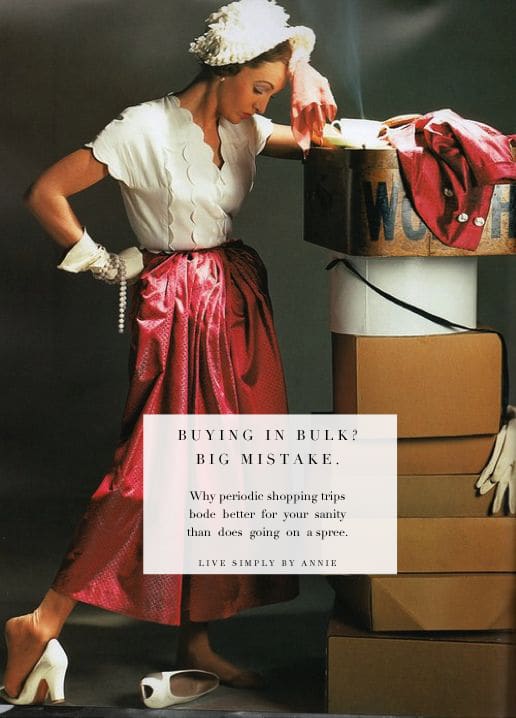 Time passes. The obsession wanes. Your devotion to the crop top lessens. You find out you’re not really all that into tea. Or, uncannily enough, you find out that although you’ve stocked yourself well with multiples, you still tend to only ever wear or use 1 from the bunch.

But then you’re stuck with all this stuff. All these things that seemed so necessary, such a good idea in the moment. So much so that you had to have 7.

There’s a kind of momentum that overtakes us when we buy things. All of sudden, buying more seems like the best idea, like the only idea! The surest way to buy 3 pairs of shoes is to buy 1, as the old saying goes (don’t Google that, it’s not an old saying).

This isn’t to negate the obvious pros of reaching clarity with your preferences and then abiding by those preferences during future shopping trips.

If you’re able to come to the realization that you really feel best in white shirts, and that owning a bunch of those and none other really will do you best because it’s what you’ll wear, go ahead and buy only white. Still though, you’ll be far better off if those white purchases are made periodically over time, rather than all at once.

It’s inevitable that as time passes, your preferences will shift, or the current trends will. So, your rashly stocking up on identicals becomes a trap you never intended to ensnare yourself in.

The goods aren’t going anywhere. They’ll be there. Best to give yourself a moment to enjoy whatever you’ve purchased, and then let your realizations about it inform future purchases.