What’s It Worth? Selling Vs. Donating

The other day I inadvertently had a mini consult with my Trader Joes checkout man.

He asked me how my day was and one tomato led to another before he had launched into an explanation of how various past projects and pursuits continued to haunt him, as the large objects they had involved–like musical instruments and lighting equipment–were still very much present in his life. Large objects taking up space in his very small apartment. 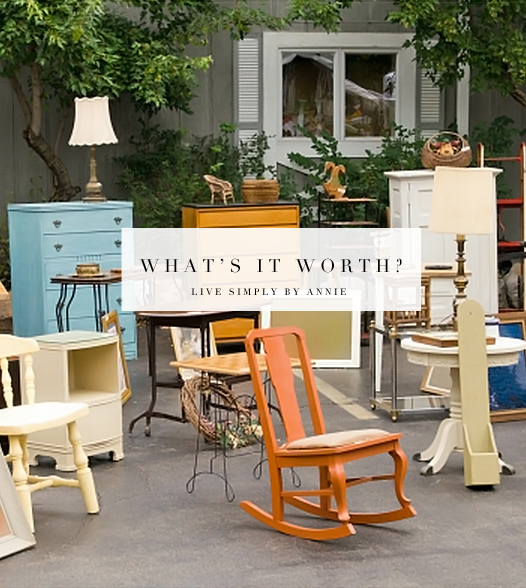 I told him what I would tell any of you: if you want to sell something, you must actually sell it. By “actually sell” I mean the following: take action steps within the next 2-3 weeks (max!) to list the items on ebay/contact a consigner/ post it on craigslist/etc.

“Wanting to sell it” does not qualify as “selling it.”

Wanting to sell it for five years does not qualify as selling it. It qualifies as a form of self-denial and self-abuse, wherein you repeatedly tell yourself a lie about your intentions, and then force yourself to suffer the consequences, i.e. being perpetually tied to a thing, rather than being able to get rid of it.

Realizing that items in your possession may translate into monetary value is worthwhile if you are the type of person who will follow through with the actions needed to make that exchange happen. If you have the time and focus, by all means, do sell those unwanted goods.

But if you aren’t that type, if you so clearly have more pressing priorities, then it’s critical for you to acknowledge that seeing all your belongings as potential monies is a trap. They may very well be worth some amount, but they won’t be if you can’t make the sale happen.

The question becomes: what’s it worth to you?

The goal is to be free of the thing. If the prospect of selling it becomes just another insurmountable obstacle in that goal, then it isn’t worth it.

Sometimes, being free of the thing easily and, most importantly, NOW, is worth more than any sum of money you might earn through its sale.

You know what else? It turns out it can be way easier to donate stuff than to sell it. And you know something else? Giving feels great. No, you won’t walk away with 1/4 the sum of whatever you initially paid for an item (a figure which usually feels slightly insulting at best) but you will walk away knowing that you performed an act of kindness which will better the whole world. Even those in strained financial situations who give will suddenly realize that they have all the riches in the world within them. A feeling which will, in turn, bring more wealth their way.

As for the musical instruments TJ?

Find a fantastic local student orchestra that’s underprivileged and donate those music makers with a happy heart. You just might contribute to the future of a budding musical prodigy.