My garden, which started as absolutely nothing more than a rectangle of dirt, and then dirt covered in gross-clovers, is now a total thrivation situation. It isn’t very large at all, (or they, I should say, there are technically two, what with the miniature one in the back), but darn it if those shrubs and flowers and whatever their exact classifications are aren’t doing their best at being alive.

I’ve never had a sprinkler system of any kind installed because both plots are so small that not being capable of watering them daily with a watering can just felt like pure laziness.

Then the plants started to grow taller, the shrubs wider, as they do, and the repeated refilling of the watering can and the sloshing of the water from the faucet to the plant became increasingly tiresome, and thus was made the purchase of a hose. A hose! A hose made the process much easier, because all I had to do was, you know, stand there, aim, hold, shift, aim, hold, repeat.

It’s kind of therapeutic in a way, caring for a garden of living things.

Last week I was standing there with the hose doing the whole aim-hold bit, only it was at the end of a too-many-t0-count-houred day of work, which necessarily entails being on my feet, running up and down stairs, wrestling with hangers, you know the drill, and this was moonlight watering. We’re talking past 10:00pm, hadn’t had dinner yet, but had to get the garden-watering done so I could be done. It was at that moment that I said to myself (except I didn’t say it because I reserve the art of talking to myself for private quarters), “This isn’t it. I need to Live Simply with this.” Really, I said/thought that. 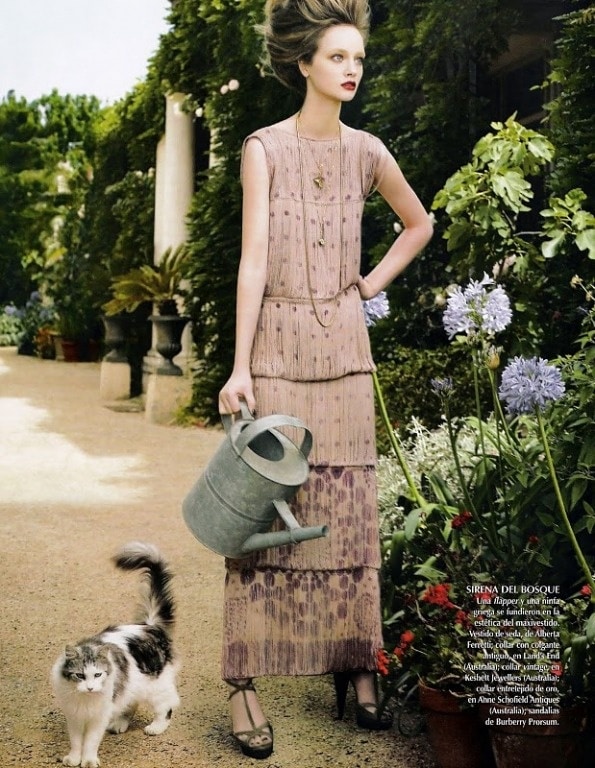 So the next morning I trotted my little self over to the hardware store, picked up one stupidly simple to use mechanical hose timer with dual output, two alkaline batteries, one oscillating sprinkler head with 0-360° coverage, one small area spot-sprinkler, one extra hose, and a pair of garden cutter things the proper name of which I’m blanking on at the moment, because I had been needing those for some time.

Then I came home, got soaked several times over, fidgeted with the placement of each sprinkler for a good who knows how long, and in the end it was like the more, the merrier! Sorry, rogue and not pertinent at all Clueless reference. Couldn’t be helped.

In the end, I had a fully automated garden watering system set up.

(We still haven’t even gotten to the assignment, you realize, but that’s kind of why you read this blog, too; right?)

Do you know that every morning since, when I peek my head outside at 6:00AM to see that little garden watering itself just as I set it up to, and mainly, without my having to do it, I get a complete kick of it? Do you know that it’s a small but significant relief in my everyday to not have to worry about that one more thing? True; both.

All of which is to say: you assignment this weekend is to automate one aspect of your life. That’s a little vague, and I’m really hoping that won’t deter you from doing it, only I can’t dictate which task would be most alleviating for you to automate. Here are some friendly suggestions:

– Install Boomerang into your Gmail and use it to automate when your emails go out.

– Write a canned response in Gmail that you can use to answer the question you get sent at least three times a week.

– Put one of your bills on autopay.

– Put your client billing on an automated system.

– Automate your accounting information to import itself with something like Quick books, or Outright.

– Sign up for automatic refills of your prescriptions (if they’re eligible).

– Any other system you can think to automate, do it.

Let us know what you’re going to automate this weekend in the comments down yonder, and if you’ve automated anything with particular success in the past, please do be a pal and share any helpful resources.