Difficult Decluttering: "But It Was a Gift"

The situation is this:

People (you) feel terribly about letting go of things that were gifts. Like to even consider getting rid of gifted items makes you in some way bad, evil, naughty, not to mention rabidly ungrateful. 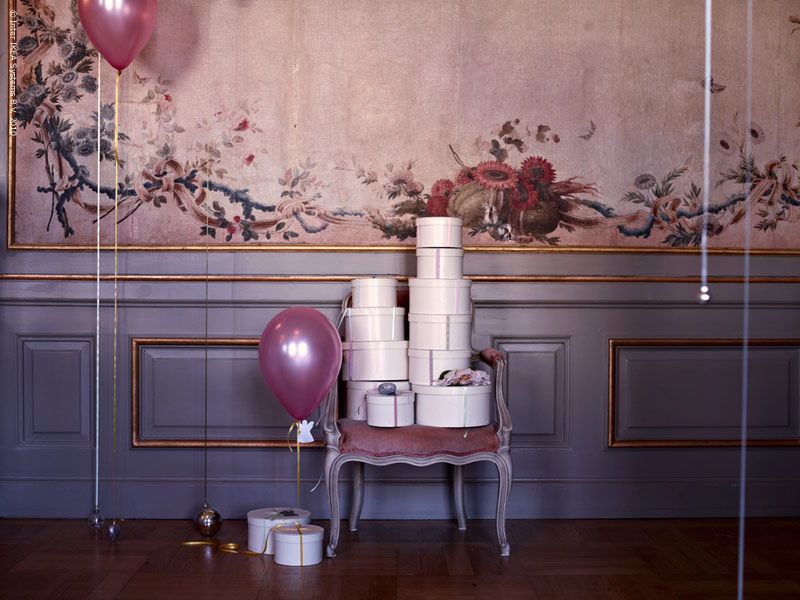 Me (holding up thing): What’s this all about?

Them: So I have to keep it. Right?

They’re stunned. They can’t believe me. It’s as if they believe a gift is an unsigned, involuntary contractual obligation: I have gifted this to you and now you must keep it for eternity, if for no other reason than out of guilt.

Guilt and obligation is never a good reason to do anything, holding onto material objects included.

It is not in any way unkind to let go of a physical gift that for whatever reason doesn’t fit into your life, serve your well-being, or mesh with your personal style.

A present is merely the physical manifestation of a person’s affection for you. If the specific form that affection comes in doesn’t suit you, then shed the form and retain the sentiment, i.e. the knowledge of their love. It might seem difficult at first, but it is possible to separate the thing itself from the feelings of connection to a person, and their kindness in giving you something. 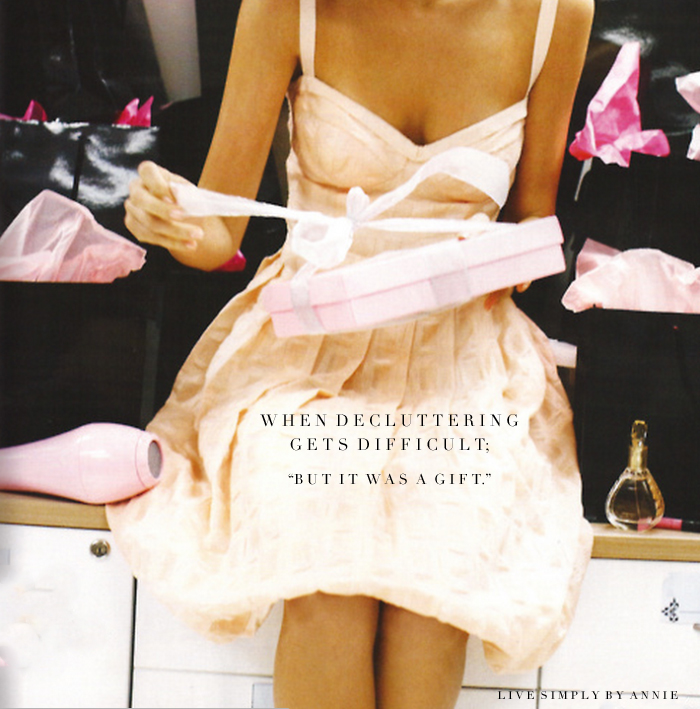 Which brings us to the second factor:

Them (frozen, holding the thing, almost retching at the pain of it all): But what’ll I do if they ask about? If they ask to see it!? Am I just supposed to say I gave it away??

Me: That isn’t going to happen. They’re not going to show up one day at your house and demand to see the lamp they bought you for your birthday five years back. I promise. But just in case, let’s review:

Hypothetical responses to the almost-never-happens scenario wherein someone demands for you to produce a gift they gave you:

You might say, “It’s around.” And leave it at that.

Or you might say, “Oh that gift? That was so sweet of you,” and then swiftly move on to another topic of conversation.

Or you might say, “Gosh, you know, Suzy came over and fell in love with that thing and just had to have it and so I let her.” (If Suzy did and you did and all.)

Or you might say, “I found this charitable organization/group of people in need and it was really important for me to support them, so I gathered up as much as I could, that thing you gave me among them, and gave it them, knowing it was going to a good place that really needed it.”

Or you might even say, “I think you know I’m newly committed to Living Simply. While I so appreciated that gift, in the end I just felt that I didn’t have the space/had to give priority elsewhere/had to let it go in order to help me start fresh, and so I donated that thing you gave me to a really worthy cause. I hope you can understand and that you won’t take it personally.”

And you might add, “I even took a picture before I parted with it so that I could always remember the kindness of you giving it to me, even though I don’t have the thing, itself.” Show them the picture and put it to your heart for effect. 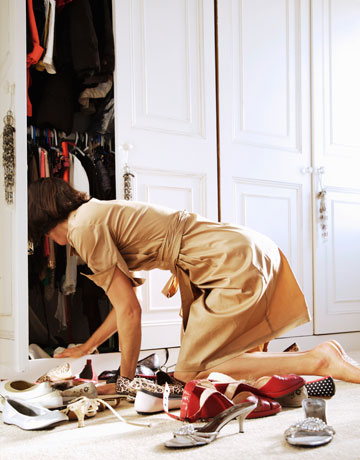 And then something sort of magical happens…

Very slowly, with hesitation, my clients start to see that a. keeping the gift is letting guilt rule them, and most importantly, b. that giving that gift away is not a betrayal, it’s actually quite the opposite.

What it really is:

Whatever was given to you was done so in the spirit of giving and generosity. It was love. If that item brings love into your life, fills you with happiness, then by all means, keep it.

But if it doesn’t, if its fate is to sit abandoned in the bottom of some dark closet then by holding onto it you are responsible for ending the chain of giving. That chain is alive and well only if the thing gives to you. If it doesn’t, you are not only not benefiting from it, but you are actually depriving someone else of the gift they might deeply desire by not passing it along. 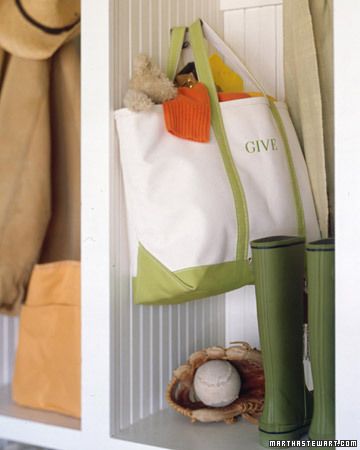 Giving away the gift is in the case the best way to honor whoever gave you the present. By doing so you are in fact spreading their abundance further, rather than inadvertently terminating it. That is how you love yourself, you love your gifter, and you love the universe.