9 More Common Clutter Culprits You Can Let Go Of (And Be Totally Fine!)

Picking up where we left off with our collective ditch it list, today I give you 9 more all too common clutter culprits, along with the permission (not that you needed it) to let each and every one of them go. 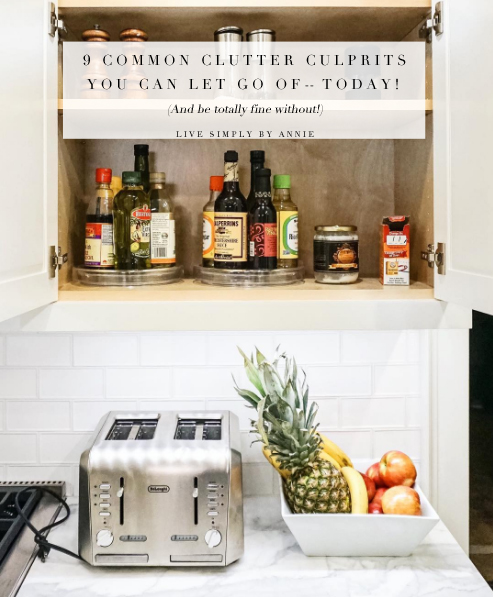 Apologies in advance to anyone reading who is a die-hard fitbit fan–I’m sure they exist and have every reason for loving the device. Let’s set aside the fact that I’ve lost count of how many fitbits I’ve found cluttering up various corners of my clients’ houses. I had the chance to wear one recently, an opportunity which, at the outset, was quite exciting. I wonder how many steps I take! Weee! But here’s the thing: when it buzzed around lunchtime telling me I’d taken about a million steps, I was like, “Yes, fitbit, I am fully aware.”

It was a fun experiment for a day, but when I took it off that night, I felt like I had my fill of it.

I think for the vast majority of people it’s a novelty gadget, one that’s entirely unnecessary and does something our internal system is designed to do: monitor our energy levels, and tell us if we’ve moved enough throughout the day.

Again, if you use and love your breadmaker, you go Glen Coco.

As for the rest of you, it’s time to relinquish the fantasy. It’s okay. You were once enchanted by the vision of you donning an apron, spending whole afternoons with your hands in dough, the smell of freshly baked bread filling your home.

The truth is that we’re busier than ever before, and that we prize convenience above all. We have important endeavors to attend to, and commitments to uphold.

If your response to the following question falls in line with hanging your head in shame/laughing uproariously, dissociating, etc., it’s time to give that bad boy away. Ready? Here it comes:

So, uh, you baked any bread lately?

I’m picking on the kitchen gadgets today, it seems, and the juicer is another item ripe with the potential to be clutter. Why? Nobody seems to juice at home anymore, guys. I’m here to tell you, because everyone tells me when I ask them about the status of their juicer.

Juicing had a big moment somewhere in the late 90’s early 2000’s, around the time all the macrobiotic stuff was the thing. But now? People are far, far more likely to hop in their car or trot down to their nearest healthy spot and grab a cold pressed, fresh squeezed, blah blah blah elixir of life.

(Anyway, the juicer has been totally superseded by the blender, which is like hashtagtrendy, hashtagvitamix4life.)

4. Specialty gadgets you don’t use often enough to necessitate having

Some examples include: bagel slicer, apple corer, pineapple corer, avocado slicer, etc., all of which might be substituted by: a knife.

The paper napkins featuring the toy story characters from your kid’s 8th birthday party, paper plates, napkins, and cups in various shades of pink, and featuring imagery such as clouds and storks from that one time you hosted a baby shower, AND SO ON.

6. Photo frames you’ve owned for the past two decades and have yet to insert a photo between its glass, let alone put it out on display.

8. Gift cards/ gift certificates/ merchandise credit you won’t ever use.

I know; I get it. It feels somehow verboten to get rid of the equivalent of money. Except, gift cards aren’t the same as money because you aren’t free to spend them as you wish. They dictate the terms. They obligate you.

If getting rid of all those you’ll never use means you have fewer to manage, and therefore fewer to sort through to find the ones you’d actually like to use (and remember they exist in the first place) then ultimately, that’s worth more.

That gift certificate you won at an auction for a weekend stay at a resort you’ve never heard of in a town you’ll never visit–wait, scratch that; that one expired in ’05–the merchandise credit for $7.50 at Don’s BBQ shack or Gymboree or anywhere else, the spa credit you’ll never use, the 20% coupon to your local doggy daycare–you are hereby free to let those go.

I’m surprised this hasn’t ended up on a previous ditch-it list to be honest. Clients of mine nearly always end up with old organizing products that have either been updated or rendered unnecessary.

Hangers (yes, even a whole collection you’re not using anymore), file accessories, drawer organizers–you are free to let those go.

If any of these items rang a bell for you, I want to hear about it! Which items on the list apply to you, and, more importantly, what are you going to do about that?