I have done a lot of moving. Packing up, moving out. Unpacking, moving in.

Moves are one aspect of my client work that I never really gave much thought to at the beginning, but they’ve since become quite central to my services. This is pleasing to me since I find them to be kind of a thrill.

Since I have more experience with the moving process than the average person (though perhaps still not that of the average military family), I feel beholden unto you to share what I’ve learned. Be the beneficiary of my many trial runs; that’s what I’m inviting you to do.

And while I could speak just on this topic, alone, for days and days, today I’ll start with just two moving truths. These are, of course, merely in my humble opinion. 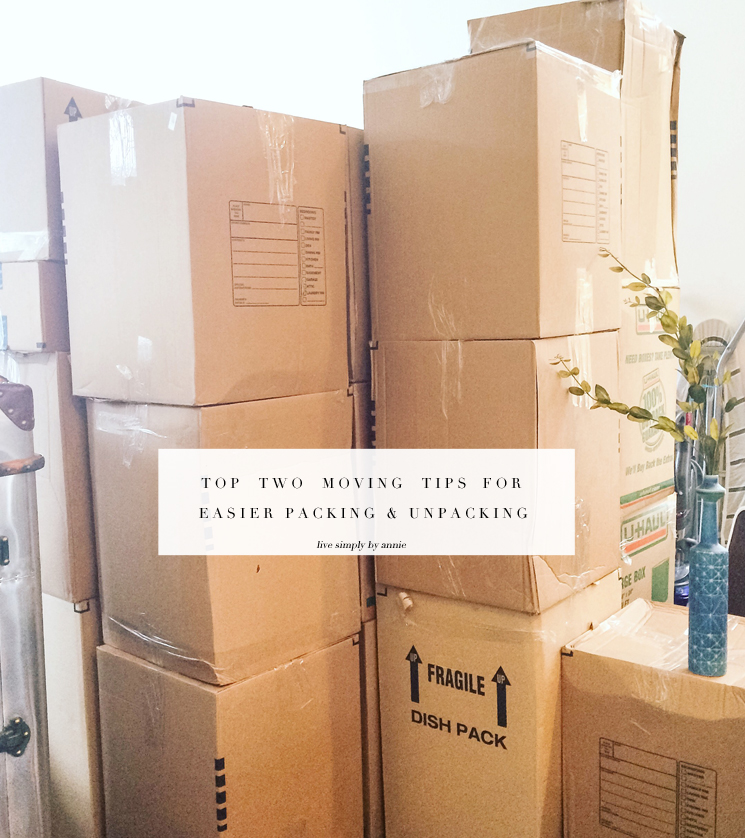 1. Paper is all you need for packing pretty much everything; promise.

– Pardon the snobbery, but moving “blankets” are nasty.

One moving company recently stuck my client with a whole load of them, which seemed like it had to have been an oversight. Really, you guys don’t want these things back?? I was fairly tempted to send the guys an Un-Thank You card. The whole lot of them was, as all moving blankets are, that kind of blue, semi-tufted, mysteriously lint-catching material, massive in size, which necessarily means some part of your body has to come into contact with them while attempting to reign them in, potent with indications of prior use–bits of tape, sharpie markings, bad smell–AND FOR WHAT. Not enough is what.

They could arguably be donated to an animal shelter (which, FYI, will frequently accept old sheets and towels and blankets and pillows), though I would sooner start a barkyard blaze than subject a poor canine to that dirty fabric.

Pieces of cardboard/foam and shrink wrap can generally provide the same buffer effect for larger pieces.

(If a moving blanket is truly the best option for the item while in transit, you make SURE those movers take them with them when they go, you got me?)

Bubble wrap might provide protection, but that padding comes at the high price of the sheer bulk of the stuff.

Plunk it in the bin and that baby will be full up before you can say “thousands of tiny air pockets.”

Slice through sheet after shoot and you’ll end up with a slightly flatter wad, but one that will leave you wondering, “Is this garbage? Or recycling? If I ran it through my shredder, would it be considered compost?”

If you have small humans around, the bubbles and their popping will provide a solid 4 minutes of entertainment, at the detriment of your sanity.

And if you roll them up, collect them for your stockpile of shipping supplies–no. Sadly, that won’t be permitted. Especially not when you have all those boxes still left to get through.

-Which brings us, finally, to paper.

Ah, the wonders of packing paper. If packed correctly [Pad the bottom of each box with paper, tootsie-roll style. The tootsies should span the width of the bottom of the box, one next to the other like neighboring corn on a grill. Use approximately 3 sheets per tootsie. Crumple them neither too loosely nor too tightly. Wrap each object in paper, being conscious as to weight distribution. Repeat the tootsie effect to provide padding in between layers of things within the box. Top box with another tootsie layer. Tape box.] there is nothing that packing paper cannot protect from breakage.

That glass vase doesn’t need bubbles, it needs a triple-sheet roll up. It also, by the way, does NOT need tape. Just roll and fold the paper over itself. If you need more paper, use more paper. Paper unrolls with the greatest of ease. Removing lots of tape from paper steals years of your life. Speaking from experience here.

Newspaper will work, but it will also make your hands look and feel wretchedly coated as you pack and unpack. So, splurge on a pack of recycled newsprint and call it a worthwhile expenditure. 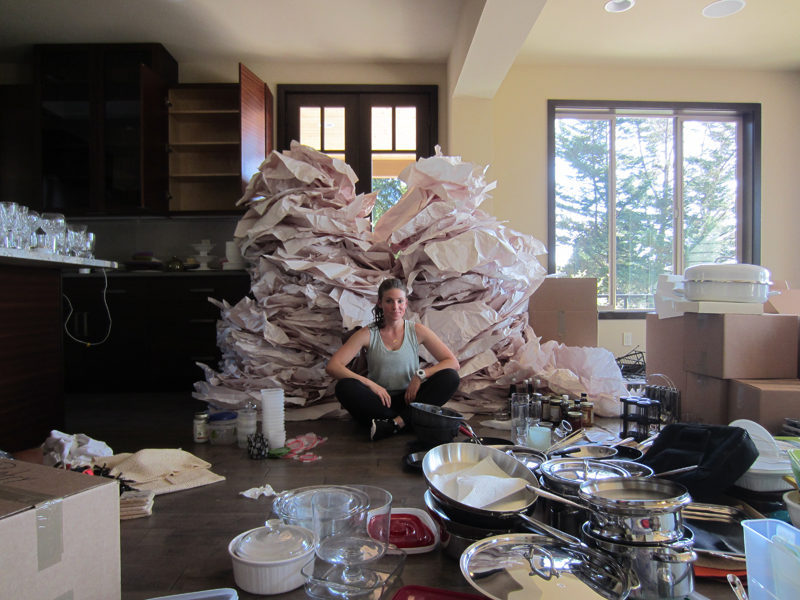 As you unpack, smooth each and every sheet of packing paper flat. I mean smooth it. Crumples are your enemy and this is relocation war. One sweeping arm movement will do it per sheet. Assemble your stack of flat sheets this way. When the stack gets as tall as you (you don’t really have to wait ’til then), gently, the way you would caress a baby, deposit that paper into a giant-ass garbage bag. FLAT.

You either put that paper in that bag full-sheet, or you may fold the stack in half ONCE and then put it in the bag. The next bit of paper gets sashayed into the bag as a second FLAT layer atop the first. Repeat until the bag appears to be at capacity.

Ideally: keeping the bag flat on the ground, sit on it. Lay your entire body over it. Heave your weight into the ground. Stand up and walk over it. You’ll have made room for at least another four layer-stacks of paper. Carry on.

Does this flattening technique take more time? Perhaps. But will it save you weeks upon weeks of overflowing bins? Unquestionably. The same paper, crumbled up to within an inch of its life, will still take up about 13 times as much room as if it were flat.

Further proof? I recently completed a move-in using the flat-paper technique. The entire household’s worth of packing paper fit into two giant (contractor) garbage bags. Two! They weighed about a ton each, and that was a-okay with all of us. One recycling pick-up and whoosh! All evidence of the move was vanquished.

And on the other hand, there was the move-in I did where boxes were unpacked prior to my arrival (ahem), and the paper inside crumbled up and shoved into garbage bags. Wanna know how many bags of paper there were? Don’t ask, because there were too many to count is how many there were. Weeks later, we were still digging out.