5 Steps To End Your Procrastination Streak And Accomplish Your Goals

If ever there was a time for most people to feel motivated enough to finally attend to those long-delayed projects or goals it’s now. I say, let’s capitalize on that inclination and get butts in gear. Who’s with me? Doesn’t matter, you don’t have a say this time. It’s happening. (With love, as always.) 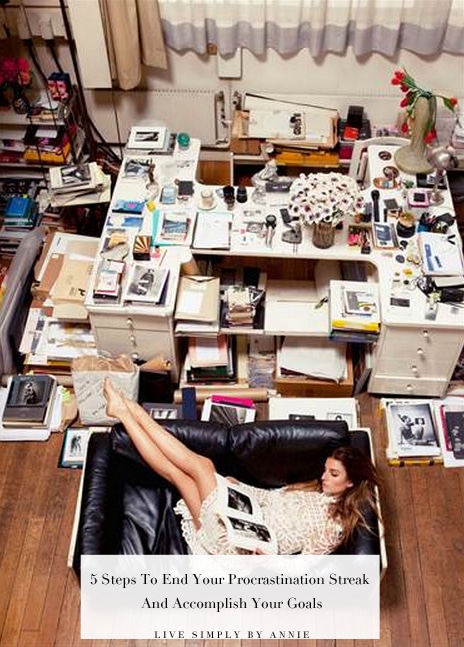 While it’s never a good idea to linger in negativity, it is crucial that you take a moment to acknowledge the ways in which your life is less joyful and/or more unnecessarily arduous as a result of your not having taken action on various projects or goals.

You need to remind yourself of why it was you originally wanted to undertake the endeavor, and of the consequences you’ve been willingly dealing with as a result of not having followed through.

Sit down and make a list or at least give some real thought to how your not having moved forward with your plan has negatively affected you.

If it’s an organizing project you’ve been procrastinating, you would do well to remind yourself of things like a. all the money you waste because you can’t ever find what you’re looking for but certainly own; b. all the time you waste looking for things because you don’t know where they are, c. all the frustration your clutter has caused you internally, the feelings of disappointment you feel in yourself for not being able to manage it; d. the arguments that the present state of things has caused between you and others, often in relation to money (a.), time (b.), and self-hatred (c.).

2. Get excited about it. Again.

In order to motivate yourself to get into action, you need to get back into the frame of mind in which you’re present to the obvious benefits you’ll reap after you’ve accomplished whatever project you’ve been letting simmer away on the back burner.

Search for inspiration photos, sit down and make a list of all the possible ways your life will be easier or more beautiful as a result of your efforts.

Put legs under the idea by illustrating to yourself that the numerous and obvious benefits will be well worth the effort they entail.

3. Move it on up the food chain. Or whatever.

You’re as busy now as you’ve ever been and there are still 24 hours in a day. That said, you have just as much time as any other productive person and how you choose to fill it is entirely up to you.

If you’re ready to decide that this undertaking is truly important to you, you may need to make some adjustments in your life and schedule in order to accomodate it.

Take a look at the tasks that are currently on your radar. Are there any that now pale in priority compared to this new (likely very old) project? If so, adjust your to do list and your calendar accordingly. Clear out whatever commitments you can in order to devote the attention and energy required to make your project a reality.

4. Break it on down to smallbitesville!

The way to get task accomplished is to break it into its smallest components. (Probably what’s prevented you from following through on the project in the past is the fact that you’ve regarded it as a large, overwhelming project, instead of throwing yourself a bone by breaking it up into small, manageable steps.)

Sit down and think the whole project through, adding each necessary action step as its own item on your to do list. When you do, you’ll see how totally doable each individual step is, which will help wave you home.

You’re now officially on the clock. You have just officially decided to take back on whatever task or project or goal it is you’ve long left simmering on the ole back burner.

Now act as if your dish towel is in threat of catching flame over said burner if you don’t follow through. Not that that happens–I mean, people’s dish towels don’t catch flame while they’re popping stovetop popcorn and the fire alarm doesn’t go off and the room doesn’t fill with smoke while the kernels are still popping and–

Point is. Put the pressure on yourself. Make deadlines. Schedule focused work sessions. If at all possible, request the help of others to hold you accountable. Ask friends or family to check in with you about your progress, or at the very least to send you words of encouragement.

You are entirely capable. I, for one, have the utmost faith in you.

Okay so, now: I want to know what project or goal it is you’re about to go full beast mode on. Come on. Pleaseee?