Monday’s Meditation: On What You Treat As Precious 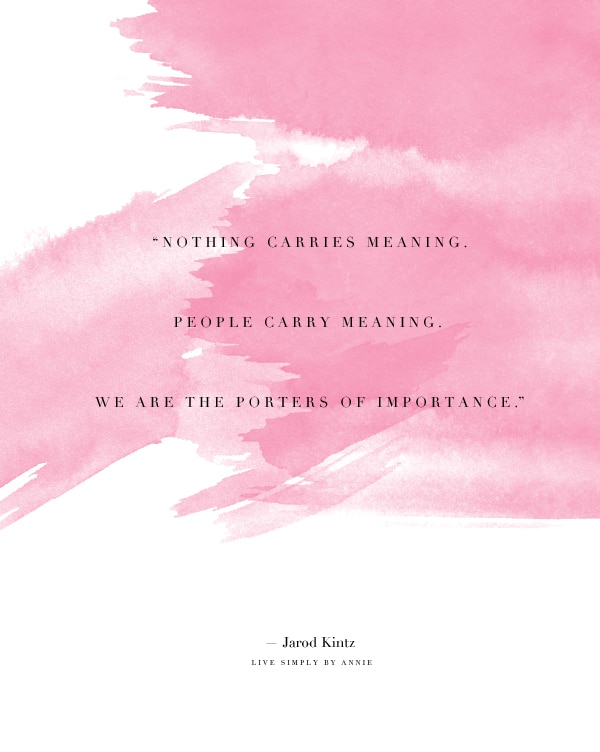 Despite the fact that caring well for your belongings is one of the basic tenants of the Live Simply Method, it is positively refreshing to encounter a person who has nice things, cares for them well, and is not overly precious about them.

These people, for whom flexibility and rolling with the proverbial punches is an art form, don’t live their lives doting upon their furniture, they just live. They don’t spend their days looking for flaws in their belongings, nor people for whom to ascribe blame for incurring said flaws. They choose finishes, materials, and pieces best suited for their lifestyle, that, from the outset, hold the most promise of purpose and endurance, and then find joy in putting their things to use. And isn’t that the most wonderful quality?

I remember watching one of Casey Neistat’s videos a while back and being surprised at how he brazenly handled his cameras, how he differentiated them from anyone else’s by marking them with white-out, and so on.

“They’re just tools to me,” he explained.

I would have expected someone whose life and profession is devoted to filming, and, therefore, revolves around cameras, to be immensely concerned about the state of his. Evidently what’s precious to him is his craft, not the tools he uses to create. Tools, after all, are replaceable.

Once, I broke something at a client’s. It was the first time I had ever broken anything of a client’s and I was panicking, positive that the ceramic bunny-adorned easter dish I had just dismembered was undoubtedly worth a not-modest sum. I was prepared to cover the repair, of course; it was the disappointment or anger my client would feel that killed me. She was out running an errand at the time, and it was all I could do to keep from crying. And so I stood there. Or maybe I ran around in circles. Frankly, I don’t remember.

When she came home, I braced her for the news. I knew that as a woman of tremendous class she wasn’t likely to send me to the guillotine, but still, she might have told me it was her favorite piece, handed down to her by her great-great-great-great-what’s-his-name and then I’d have no choice but to send myself. All I want to do is repair people’s live and spaces, not break them.

When she asked which piece it was, I showed her, demonstrating the decapitation of the rabbit (those ears were its death if you must know).

“You know what? I never use that thing anyhow.” She said.

I think I stuttered various phrases. I wanted to offer to voluntarily issue myself some horrible punishment.

“Oh my god, you poor thing! Have you just been waiting here to tell me about this?” She turned from the bunnies to me.

“Will you have some champagne with me? Come on, I’ll open a bottle of champagne. Yes?”

And then we sat in her kitchen at 3:30 on a some-day, I who practically never drink, and she, entirely unconcerned, toasting to my blunder. The only precious thing about it was the attitude she’d taken towards the situation, the fact that it had allowed me to allow myself to forgive myself, and the connection we enjoyed as we sipped our bubbly.

A while back I had these clients whose home had lovely hardwood floors, only you wouldn’t know it. The entire main level was covered in an area rug mosaic, which they were adamant about keeping in tact. They did this, they told me, in order to protect the floors underneath from their pets and the sun and so forth.

The rugs–none of them matching–overwhelmed the eyes, and they made the rooms unbelievably dark. Daylight hours could easily be mistaken for nighttime, and in most you had to turn on lamps in order to see even at noon.

Eventually, after we had carted off too many loads of clutter to count, I got around to asking them: what exactly were they saving the floors for? Didn’t they love the floors they’d installed? Didn’t they love the light that filled the rooms seemingly by magic when we removed the rugs? Whom were they protecting the floors for if not for themselves? And really: what was the point of having nice floors if not to admire them, live with them?

We talked it over and eventually compromised: we’d remove the majority of the rugs, with the exception of those that covered the most-heavily trafficked/ dog-laid-upon areas.

They’d opened themselves up to the fact that their perfect floors might become less so, and in return increased their comfort in and enjoyment of their space. What’s more precious than that?

There is a distinct line between being careless and being anal with one’s belongings. I have stood on either side; I’ve watched a home steadily degrade under the weight of chronic illness (and believe me: that is all kinds of soul crushing). I’ve witnessed people who display an utter lack of gratitude for the abundance they so obviously have, treating their possessions as if they were presumed rights to be squandered at their will rather than as the blessings they are. And, I’ve met people whose homes rival any 5-star hotel lobby or museum who are tip toeing their way through their hallways, obsessing over every scratch, nick, or smudge.

The more I live in the world of stuff, the more I’m obsessed with the conversation of things, the more I’m convinced that the trick is to covet one’s own belongings wholly, to care for them to the best of your abilities, and to let life happen, knowing full well that the occasional scuff, scratch, or ding is merely proof of a thing’s utility. The more experiences I rack up relating to the treatment of material possessions, the more I’m certain that the secret is to keep perspective on what’s truly precious, and priceless.

The reason why people who are both conscious of the state of their belongings and who are not overly precious about the things, themselves, are so attractive is because in adopting such an attitude, they are displaying what we all pretty much know somewhere deep down but occasionally lose sight of: fulfillment of one’s purpose is precious. People are precious. The present moment is precious. Things, well, they’re still just things.