Monday’s Meditation: On Being Surrounded By Bats And The Power Of Travel

*Happy Monday! Before we get into today’s post, I want to remind you that the Live Simply Closet Edit Masterclass launches TOMORROW! Head on over here to sign up to be notified the moment registration officially opens. I can’t wait to see how you’ll use the masterclass to Live Simply… 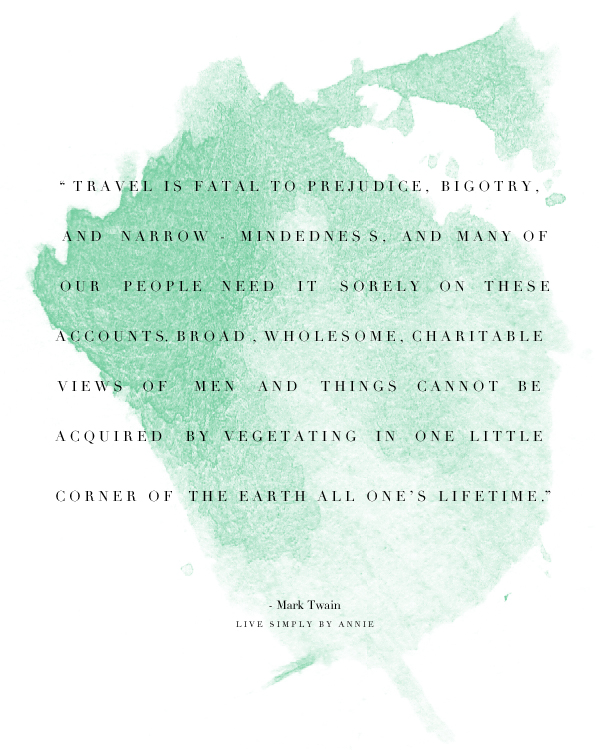 The really boring truth about me is that I dislike the notion of traveling.

Few things sound less appealing to me than leaving the security of my home base and venturing to a place where there is no pre-existing framework for my routines.

So disappointing of me, isn’t it? Tell me about it.

In theory, travel, to me, is a nuisance. It takes me away from my work and my clients, which I’m obsessed with. It’s massively fatiguing, too. Shlepping from point A, my home sanctuary, to point B, some random place on the planet, is tiring in the most mundane way.

And stressful! Let’s not forget how stupidly stressful the process of preparing for a trip invariably is! No matter how well organized you are, there are still about seventy-three things you have to get done in a matter of days leading up to a trip, and that’s in addition to the normal life tasks you’re already attempting to accomplish.

It doesn’t matter how efficient you intend to be or are, how many lists you make and re-make, you still seem to manage to find yourself standing naked in a panic hours prior to departure, struck with the realization that you’ve completely forgotten to attend to some crucial detail. Like getting a wax before a two-week tour of the world’s best beaches. Or remembering to have your tux cleaned and pressed for the wedding you’re due to attend (I’m just guessing).

And then, even after all of that, even after you’ve made your final cuts and gotten your bag zipped and set your alarm, even then you have to endure the all-consuming, usually unwarranted anxiety to meet your departure time.

Super convenient for me, then, that I wedded a travel author and photographer, a man whose idea of bliss is unknown terrain and a really big backpack, who could work up impressive enthusiasm in a matter of mere moments at the prospect of visiting unpopular locales such as Kandahar, Mongolia, or Russia. (No offense to Kandahar, Mongolia or Russia.)

David’s definition of success is how many trips he has planned in a calendar year that take him away from home. Mine is…not that.

For as much as I resist his flight-planning advances; for as strongly as I sort of hate-love him the night before we’re set to leave; for all the times I’ve declared that this trip he’s planned is coming at the worst possible time for me, and really, come on, I can count on one hand the actual number of trips I’ve felt were total flunks, and in seven years, we’ve traveled a lot.

Yes, I’m the obnoxious child he has to take kicking and screaming up to bed, who insists they AREN’T tired and they certainly COULDN’T do with a bit of rest, and who WON’T sleep for anything or anyone, and then whose eyes lid themselves so solidly together that the flapping of eyeball hoods is heard ’round the block, followed by the slow hum of REM breathing.

You were right David, this 24-hour Mexico City blast has been just about the coolest, most unexpectedly delightful jaunt in recent memory.

Yeah, I guess climbing to the ends of the earth to experience the singular Balos beach was completely worth it. I almost pushed you off the side of this Cretan cliffside on the way here, but damn, I’ll hold your hand now, man. You seein’ this??

Travel has the power to re-awaken you and your sense of wonder. Travel reminds you, as Mary Oliver says, of your place in the family of things. Travel grants you access to this fluid mental bubble, wherein a lifetime of established notions and truths can be, in a moment, re-written.

Like, you might find yourself staying at the most impossibly well-designed boutique hotel in Byron Bay, Australia (a smart man is one who learns how to marry both partners’ interests). Your butt cradled in a stylish black canvas chair, you’re enjoying the dusk that’s settling in as you munch on nuts from a local health food store. Hearing the chirping of winged creatures and the ripple of air currents, you look overhead to see a tapestry of birds, the wing-shape of which you recognize as bats. Only these bats are not like any you have seen before. They bare almost no resemblance to the wimpy black vermin that have occasionally cropped up throughout your life; trapped in the garage, snuck into an attic, hanging upside down in all their vampy, detestable glory.

These bats are four times, at least, the size of any bats you’ve previously seen, and as you scan the sky, you realize it’s teeming with them. The unmistakable silhouettes of a thousand bats move gracelessly but nonetheless in colony as far as the eye can see. Their black, many-jointed wings, spread wide with webby elasticity, create a pattern against the cerulean sky.

And for the first time in your life, you just gaze at the sight of a team of bats. You don’t run for cover or grimace. You just watch them. And they strangely don’t seem revolting, at all. They seem like birds. Like birds with geometric wings who, after all, eat the bugs. And even though there are more of them in one place than you’ve ever seen, and previously the sight of one, alone, would have been enough to send you flapping your way inside, you won’t feel the slightest bit afraid. You understand they want nothing from you but to fly above if you happen to be below.

And there it is: a lifetime of belief dispelled in a moment, giving way to a new perspective.

And maybe, just maybe, if bats can be something other than what you used to believe bats were, maybe there’s reason enough to remain open to the world.

Maybe that’s why he dragged you all the way here. To see things from a different angle. To see the same things from a different place and different things from the same place. To keep you on your toes, alert, aware, but ever-open to the possibility that perhaps the world, including its ugly and gross facets have their purpose, too. To teach you. To make you better. To make you face head on the truths you’ve held resolutely for who knows how long. Maybe he brought you here to sit with him in the waning daylight so that the chorus of a thousand bats could usher you back into the state of awe and wonder you were born with.

So you sit there with him, both of you repeating, “wow,” over and over like two dopes. And you think how you never could or would have seen beauty in bats if you had just stayed at home.