Monday’s Meditation: On The Point Of Things Falling Apart 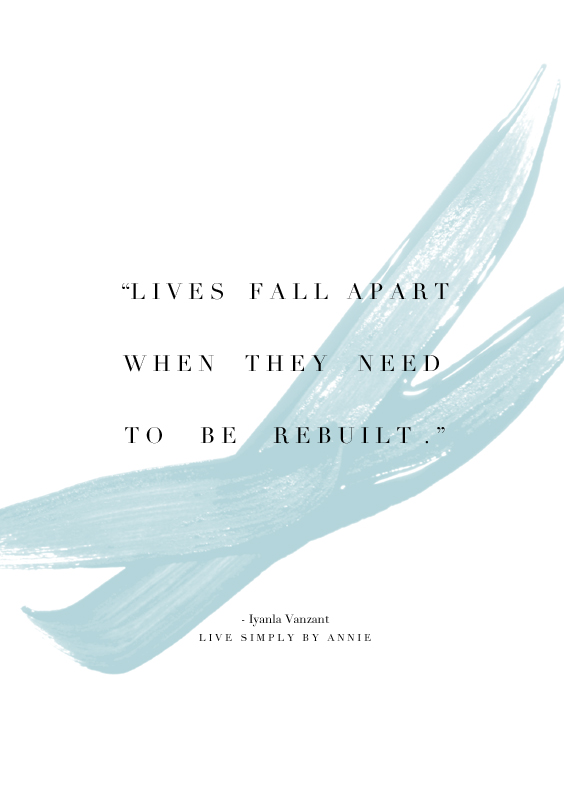 Once upon a time, one of my very best friend’s life fell apart for a minute.

She is undoubtedly one of my stablest friends, as adverse to bullshit as I, and so, for her life to fall apart so drastically and unexpectedly is not a common occurrence. Nevertheless, it was a matter of hours between the collapse of two of the biggest dominoes in her life.

At 10:00 AM, she received confirmation of the fact that the guy who she had been invested in for nine months was not interested in furthering their relationship. Pow.

At 12:00PM, her boss called her into his office to inform her that after five years, during which she single-handedly steered what was before her arrival and what will once again be following her departure, a schlock company, she was fired. Fired! Collect your things and we can tell everyone whatever you want and you’ll soon lose access to your email, fired! Pow, pow.

A different person might have taken her being unceremoniously dumped by a guy she was crazy about and fired from her job in the same day as a sign that life was shit, people are the worst, and the only suitable course of action would be to crawl under the covers and binge-watch Sex and the City episodes while crying into a pint of Halo Top (calorie conservation, even in times of devastation).

A different person might have wondered why life had to be so hard for her, why she never got what she deserved, and other self-pitying thoughts.

When we spoke on the phone at 12:30, she was calm. She told me matter of factly what had been said in the meeting. And then, because she isn’t a different person, but herself, she realized how everything in her life was perfect. I mean, it wasn’t really perfect, it was shit momentarily. But she saw what it takes a truly special person to recognize: her life, her psyche, her whole being was learning an important lesson–a lesson that she, herself, had created the opportunity to learn.

It was she who had been saying for many months how unfulfilled work was making her, how it was no longer a place she felt she could rise to her highest potential. It was she who was getting tired of the office shenanigans, she who was getting impatient about the company’s reluctance to innovate. It was she who had told me in a phone conversation not three weeks prior that she really ought to start getting her resume in order, polishing her portfolio, and thinking about what more there could be out there.

It was she who had noticed months prior that the guy she thought might have been the guy was no longer giving her the reciprocal energy she deserves.

And yet, in both cases, she remained committed. She is wired to give to others, to continually show up for others.

But whether it was our numerous phone calls, during which I repeatedly told her the necessary truth, or her subconscious, or both, bullshit was being called. Her internal knowing that she is worthy of receiving as much as she gives was waving the penalty flag. That knowing, combined with my cajoling, had undoubtedly caused her to stop feigning patience for unproductive office meetings. It had caused her to get upset with this guy, enough to address it with him. It had caused both to say: that’s it, we’re done here.

Life hadn’t happened to her; she had created the circumstances she most needed in order to learn the lessons essential to her growth as a person. All along, no matter what she might have thought she wanted out of the work and romantic relationships, she needed this.

The synchronicity of everything was setting in, the overlaps becoming more and more obvious to us. Our voices were getting louder and louder, until we were just two shrieking imbeciles, on either end of the phone, excitedly putting together all the pieces that had been scattering over the last five years, over the last nine months, over her whole life.

Things fall apart not to devastate, but to invite us to realign ourselves with the people, environments, and energy levels that fit our now-higher, more evolved selves, here to love and be loved, to give and receive in equal measure.