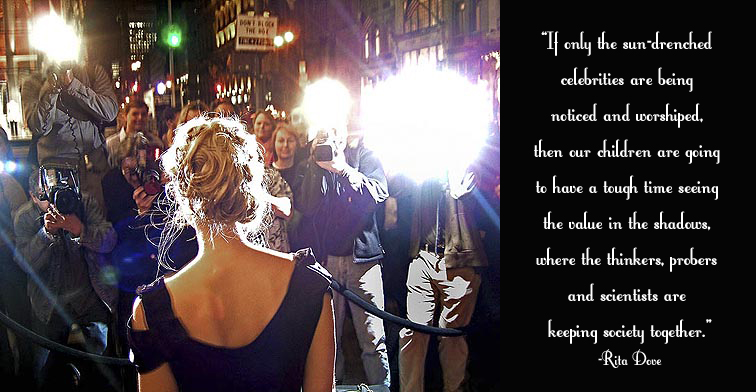 Last night I got to watching Sellebrity, a documentary by Photographer Kevin Mazur about the nature of celebrity and fame in our culture. It was a somewhat sickening illumination of the relationship between celebrity as commodity, authorized and unauthorized (read: paparazzi, TMZ, Perez Hilton) exploiters of commodity, and consumer (that’s us).

Granted, it is a peculiar situation from the outset when the commodity, the commercialized good being sold and used for profits, is a person—a thinking and feeling person who, was it not for their notoriety, would be not unlike you or I. That construct, when paired with the rapidity of mass media, has given way to utter frenzy.

Whereas famous actors used to enjoy the luxury of highly controlled media attention via the governance of their respective studios, our generation has sanctioned the extinction of privacy. The demand for intimate access into celebrities’ lives is so great, in fact, that it has lead to the 24-hour surveillance of paparazzi, men and women who possess no more qualification than owning a camera and who will stop at nothing- car chases, invasion of privacy, trespassing, purposeful inciting— in order to capture images of The Celebrity In Their Natural Habitat, like some exhibit in the zoo.

The demand is so great that companies like TMZ are breaching nearly 20 million visitors a month. So great that once respectable journalistic news sources are bowing to the need for eyes, compromising the quality of their content with the known desire for “entertainment news.”

That mass media has vastly accelerated the rate with which images and information about celebrities spreads is no surprise, nor is the fact that technological developments like the camera phone have increased our ability to document any person’s life.

What remains confounding is our relationship with celebrities. Consider the dynamic: we, the audience and consumer, catapult various individuals into positions of overwhelming fame and attention. We see them perform and we become mesmerized, awed by their grandeur like deities. Indeed, appearing on huge scale screens and stages they appear as such. We choose our favorites; emulate their fashion choices, their hair styles. We worship them.

The great irony comes, then, when you think of our greedy and insatiable desire to expose those whom we have elevated to god-like status as being shamefully, horrifyingly, unattractively human.

There is no denying it: we revel in nothing more than the opportunity to watch as the famous become stripped of all their crowning glory, revealed to be just as mal-adjusted, ugly, imperfect, and dull as the rest of us. Why? Because it makes us feel better about ourselves, of course. Oh, and it provides with some much-thirsted after fodder for spicing up otherwise tedious days in the life of the Average Person.

Could it really be that basic? Could the billions of dollars paid out to unauthorized, aggressive and invasive paparazzi, the people employed to retouch the images submitted by them of actual human beings into visibly flawless creatures, and the individuals and publications who claim themselves as significant, journalistic and respectful but in reality are nothing more than bottom-feeders, desperately attempting riches themselves, could all of that be nothing more than the sum of our appetite for gossip and self-assurance? It couldn’t be.

As we engage the very system that probes the untouchable world of celebrity for any accidental indications of humanity we become the basest versions of humans. We propel ourselves further down the well of disgraceful even at the moment we excitedly point the finger at a famous person revealed to be so. We play the flawed mortals as we do at no other time when we fail to see the potential stimulation in our own lives, favoring instead the acquisition of gossip about people whom we don’t actually know.

We are not famous, although social media profiles like Facebook offer us the fleeting chance to feel as though we might be, but boy we are fame-hungry. And because we aren’t famous—truthfully, it has come to that, fame is now the expectation—we hate ourselves a little. We feel we are not enough. And so we glorify certain individuals for the sake of tearing them down in order to once again feel adequate. “Ah, see, they’re just as messed up as me. Knew it all along.”

What might have begun as innocent curiosity has quickly escalated into anything but that.

Each and every one of us who have ever purchased a magazine like Star or OK!, visited websites like Perez Hilton, TMZ, flipped away from credible new shows like Charlie Rose in favor of E Entertainment, is responsible for initiating this “sellebrity” process. We, ourselves, have written the checks to those vicious, debased paparazzi. Their presence is merely proof of our demand, a hard fact to swallow.

It is difficult to know where to leave off on this issue, what to say other than acknowledging what is, is.

For the sake of utilizing the platform I possess, I will say that I urge us all to at least be aware of this dynamic and discerning as to the context of the images we see. I urge us to consider the value of the fleeting entertainment we’ll feel at being given glimpses into the private moments of celebrities lives, such as walking their children to school— and to consider those children as well, people who haven’t had a say in whether or not they wish to be in the spotlight, and who nonetheless are similarly hounded by the flashing of cameras and the shouts of the people operating them.

I encourage us to at least try to conceal our unbridled giddiness upon the next celebrity scandal outbreak, to at least pretend as though we aren’t villainously pleased at proof that fame is not a guarantee of perfection. The spoiler: it isn’t. Celebrities are people constructed just as we are who exist in rarified atmospheres. That’s it. Bubble, bursted.

And finally, even in today’s society, even in a culture where the word “fame” doesn’t capture it and “mega fame” only begins to come close, your life is still important. Your life exists on a scale relative to it and your one and only chance at happiness is to ensure you do everything within your power to embrace the life you have been given by enriching it with meaningful service, fulfilling relationships, and strong community.