For all the playrooms and children’s bedrooms I’ve edited and organized, it hasn’t been until recently that the Lego issue finally reared its interlocking part.

The moms are texting and emailing and calling and sending the message by way of plastic, miniature carrier pigeons: “The Legos are taking over, help, Annie, help!”

Wikipedia says that since July of 2015, at least 600 billion Lego parts have been produced, and I’m willing to bet more than seven of you could swear you stepped on that many this morning.

Let’s do what seems the only sensicle thing, and that’s to gander at the brilliant ways other people have come up with to handle their Legos. 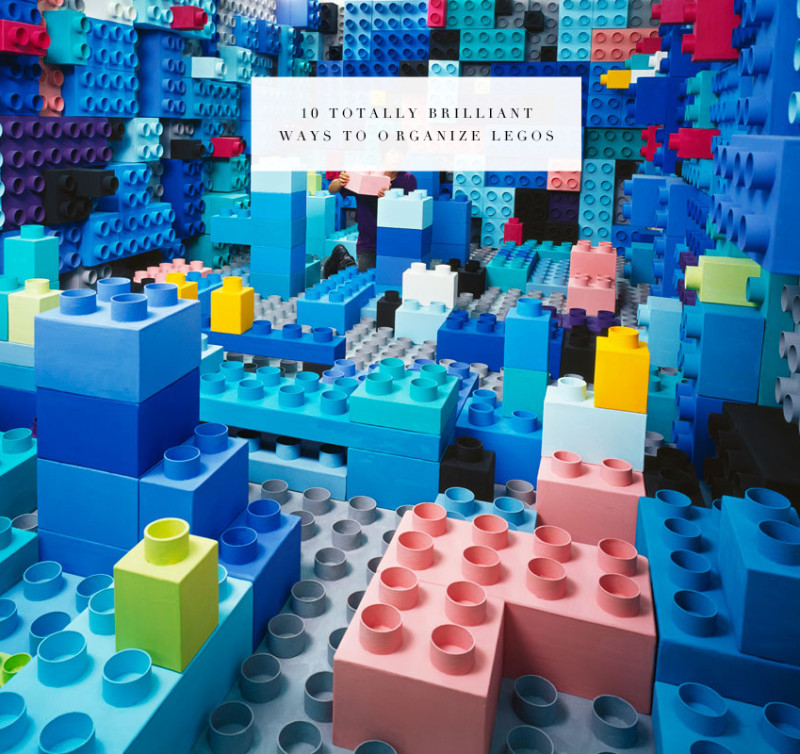 1. For the parent that cares most about children being able to play with their Legos, and then being able to swiftly thereafter pick them up in one fell swoop, please allow me to introduce to you the Lay N Go Activity Mat. 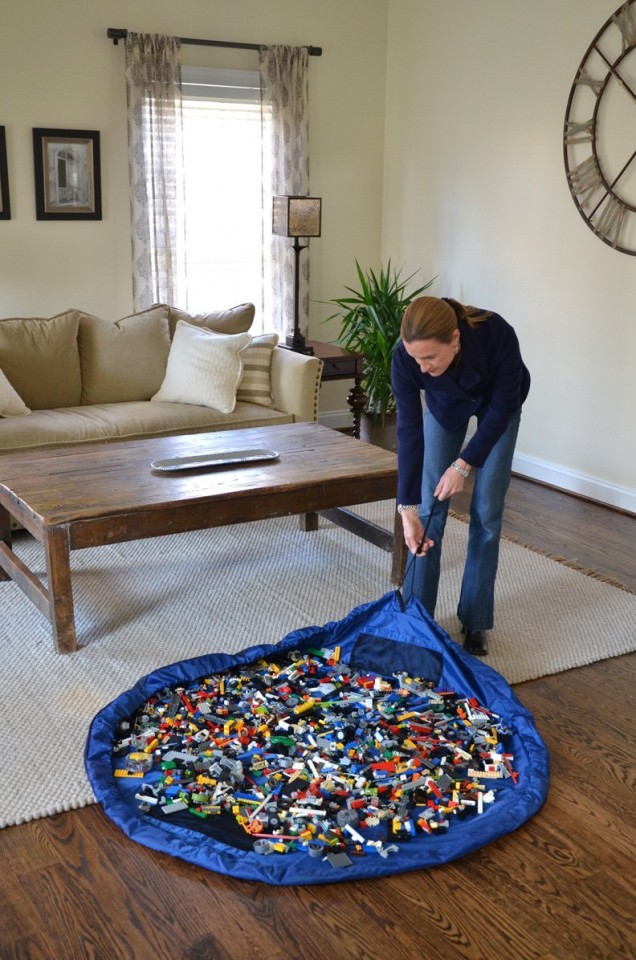 2. The self-named “unfussy” (and out of the way) system proposed by Parents is a winning one, in my mind: use a divided underbed drawer to store Lego parts, and keep current projects in tact. When play is done, push that sucker back under the bed. 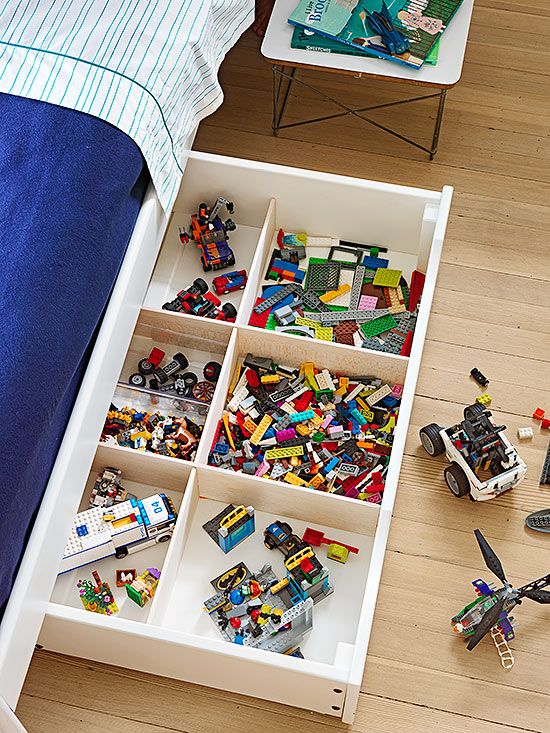 Their vote is to ditch all assembly booklets after respective projects have been built, since children never actually rebuild, and even if they wanted to, the chances all those required original parts are still all together… But! For posterity’s sake, take a picture of creations once they’re made.

It might not be as meticulous as other organization systems in this roundup, and I kind of love it for its overall Simplicity.

3. Childhood 101 uses a divided underbed box for some broader-range Lego sorting. She then situates the box underneath a table. 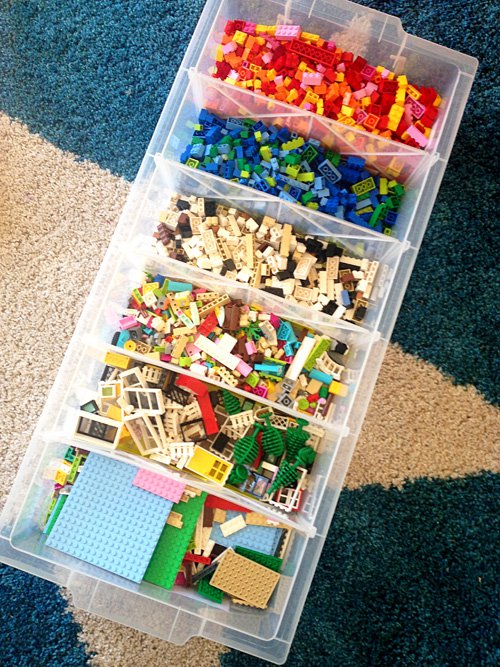 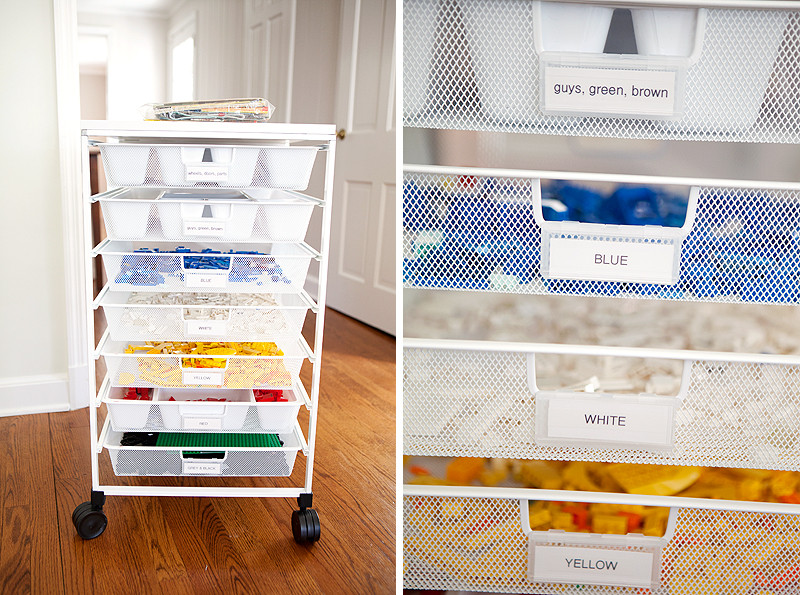 5. It’s no surprise that the DIY-minded parental figures of the world have inducted various IKEA products into the Lego Organizing Hall of Fame. Such is the case with the Lack table, as demonstrated (and very possibly pioneered by) Centsational Girl. 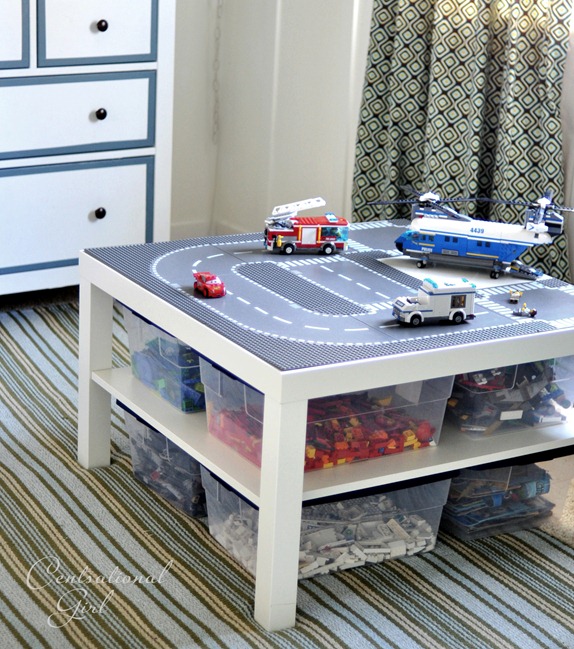 The storage bins she uses, each containing a category of Lego parts, including colors, figures, and assembly booklets, fit perfectly underneath the table–the top of which, itself, is a play/building surface.

6. The Trofast system is another favorite for Legos, and it’s clear why, as demonstrated by Hideous Dreadful Stinky‘s system (seriously, that’s the name of her site, not one of those times I’m trying really hard to be funny).

It’s a kind of drawer/bin hybrid, and the size of each lends itself particularly well to Lego storage. 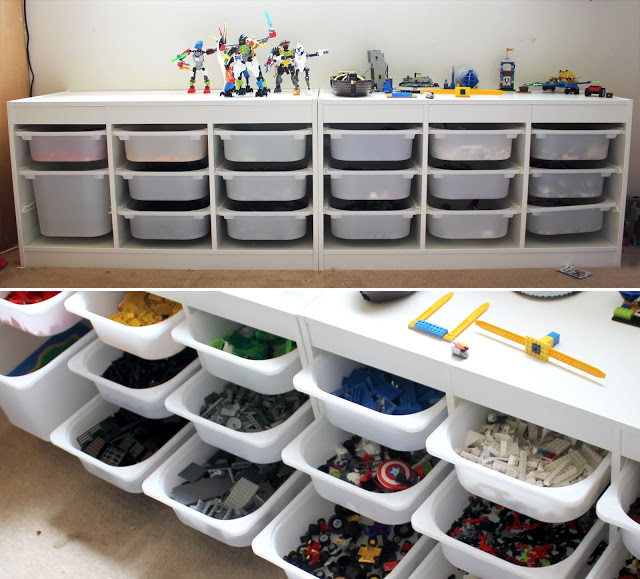 7. So Much To Dew adds further evidence to the argument: 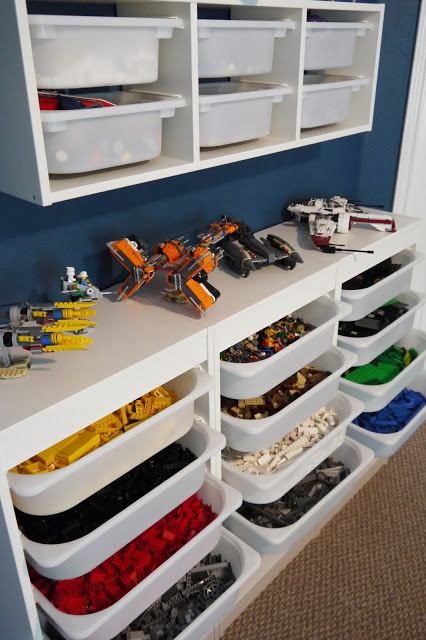 8. And if we’re heading in this direction, I must say that These Little Moment‘s iteration takes the cake for me: 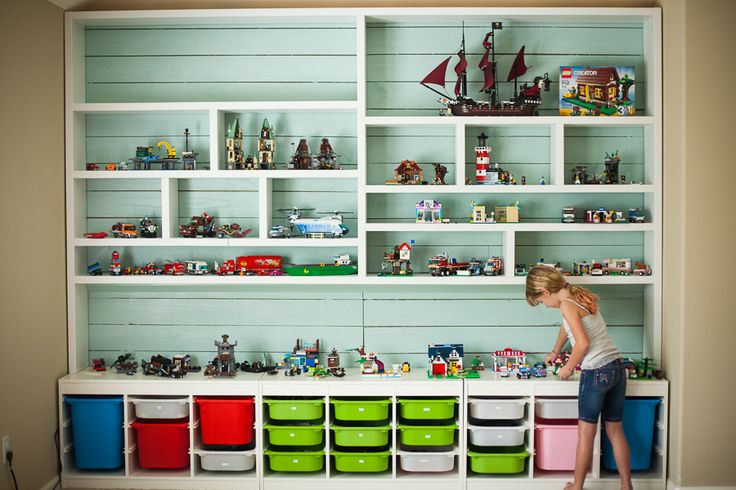 A place for storage, for building, and for display. I can’t decide if that’s the ultimate kid’s dream, or parent’s…?

9. Lest you were starting to fear this post was headed in the direction of “Legos in full sight or bust,” Design Harmony comes to save the day. Her system is just as organized and play-enabling as the others, plus it offers the added benefit of camouflaging. 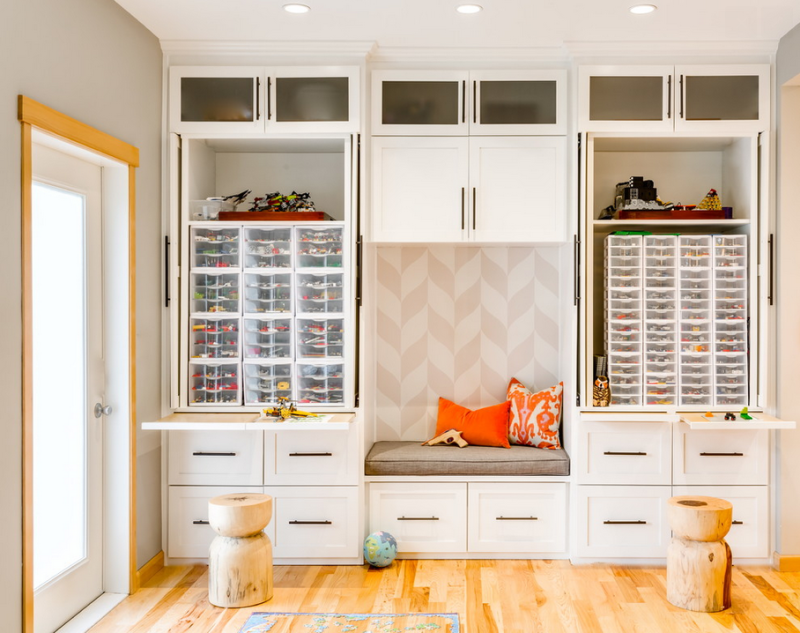 Now you Don’t with a capital D. 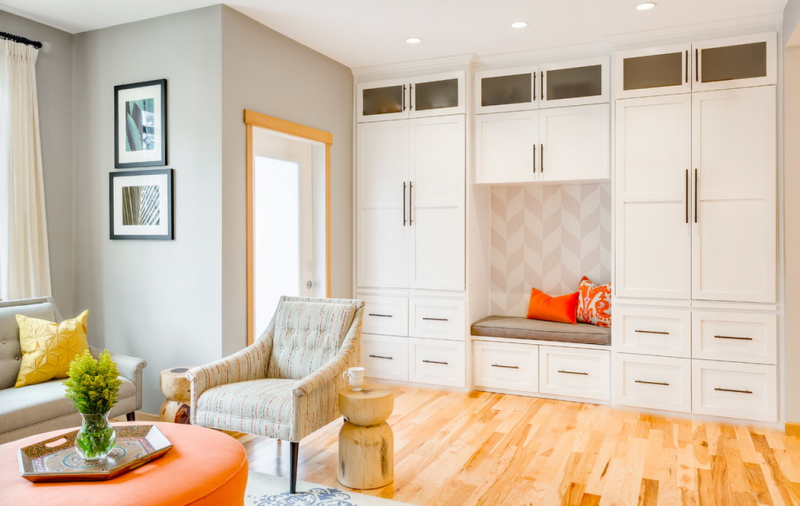 10. Finally, this from Board and Vellum. Which I first saw around two years ago and have been going, “WHOA. wow. Lot. That’s a lot. That’s intense.” ever since. 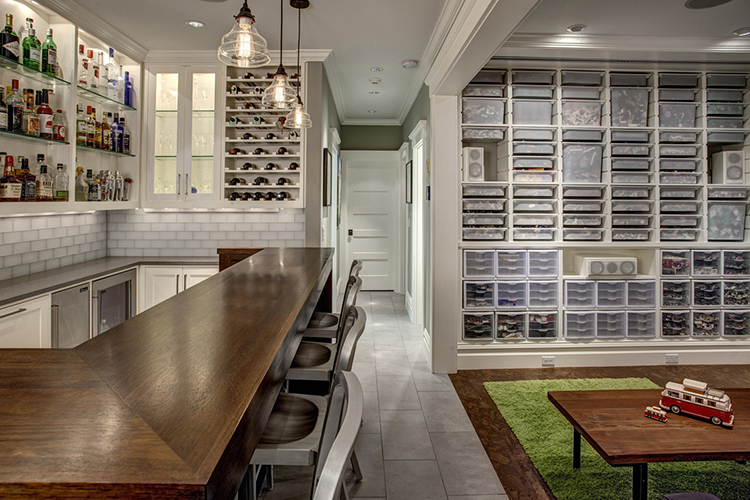 I don’t think I have or need words. Is it the definition of Live Simply? Or is it the opposite? You decide.

Hopefully these winning examples got your plastic wheels rolling.

And as far as whether To Sort or Not To Sort?

It’s sort of a toss-up in my mind whether it’s worth it to really meticulously sort of Lego parts. On the one hand, sorting the parts creates a workable and maintainable system–there’s a clear place for each thing to go, and thus, it can reasonably be expected to go back there.

On the other, I think part of the beauty of Legos is their smallness, and the fact that you can ostensibly create something with any random handful of parts.

Truthfully, I think it has to come down to whether you think it will be a help or a hindrance; a way to live with more order, or a battle you, as a parent, will have to wage unsuccessfully, causing you endless frustration.

Of course, HINT HINT the more refined a collection of any thing is, the easier it is to manage. So maybe, keep editing those Legos.

Force and plastic bricks be with you.