Last week I introduced to you to the Madrona Master Closet, and at workweek’s end, tempted you with the hint of the baubles to come. I apologize for the fact that you undoubtedly lost sleep over the weekend as a result, tossing and turning as you were with anticipation. Today I will explain all.

Right from the get-go, I ascertained that the necklaces were going to be a thing. The closet needed attention, certainly, but it was glaringly obvious that the necklaces were equally in dire need of a proper home. It should be said that my client herself is a jeweler, which not only accounts for the vast collection of necklaces, but also further emphasizes the necessity of organization.

This work I do is such a careful balancing act; sometimes it’s much less about clearing out as it is clarifying. That my client has a real love of jewelry, that she constantly adorns herself in it and that it’s basically her jam in life isn’t something I wanted to steamroll, but honor. If it’s something you really love, that makes your heart sing and such, well then, let’s celebrate that by making sure it’s wholly accessible, stored with care so as to protect it, and so on.

I knew I had to do good by her on the necklace front is the bottom line.

Without a legitimate spot, they had overtaken every single door knob on the second floor, along with a few corners of artwork on the walls, and various stray hooks in the bathroom. 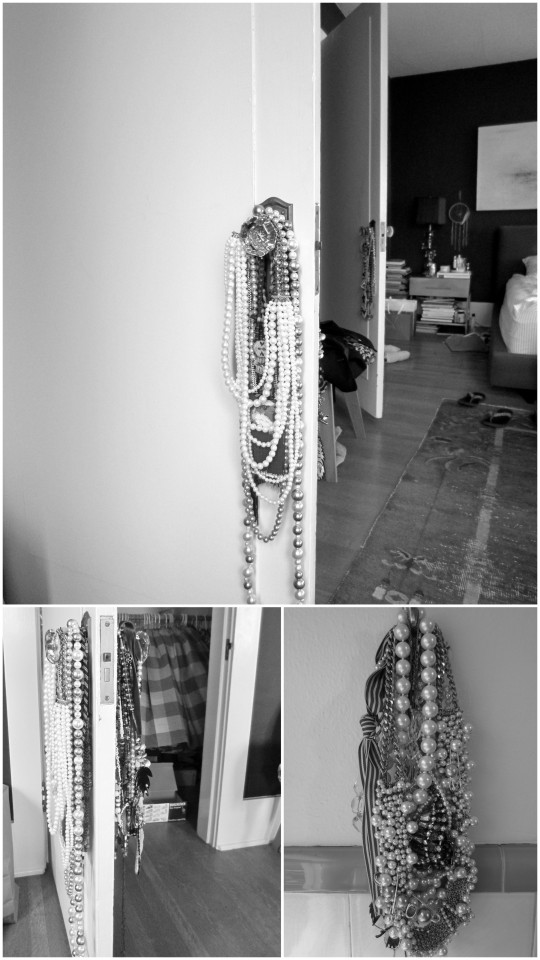 It was rather amusing in a pathetic sort of way.

There was no space for them in the actual closet. That was out. There was however, a little vanity area that my client sits at to do her makeup. Done.

I went shopping for ready-made necklace organizers to no avail. None of them were right, none of them could have accommodated the whole of her collection, and the available options just ended up annoying me, all.

Then I was all, “I’m Annie! I’m plucky! And this is Live Simply!” And thus did I escort myself to the Depot of Home to buy a random assortment of wood pieces, hooks, and screws.

I spent a good few hours on my client’s deck, drilling tons of tiny holes, screwing in little hooks and wondering why on earth I was knowingly shredding my poor hands to pieces when I could have easily thrown on a pair of gloves as a way to simultaneously guard against the cold and the carpentry abrasions. But when you’re in it, you’re in it, you know? And oh lord, after all that was done I still had to install the things onto the walls. It was the kind of crazy strenuousness that always has a way of producing the best Live Simplyness.

And now, you have to look at a lot of pictures of necklaces hanging from hooks– such is the extent of my pride of accomplishment. 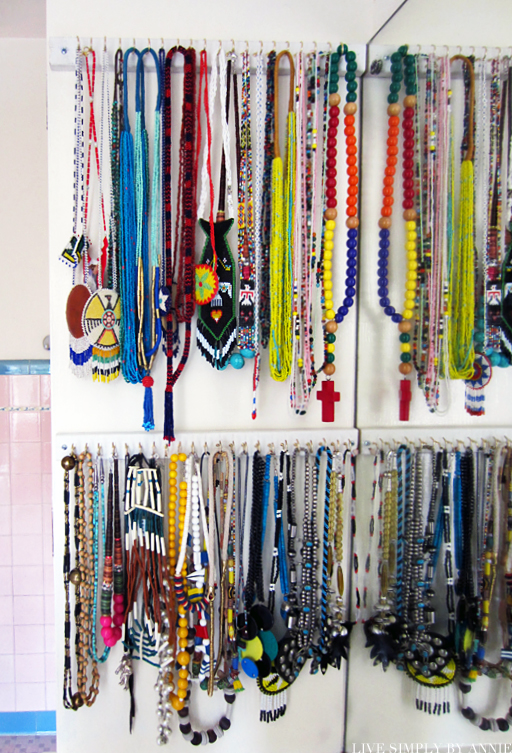 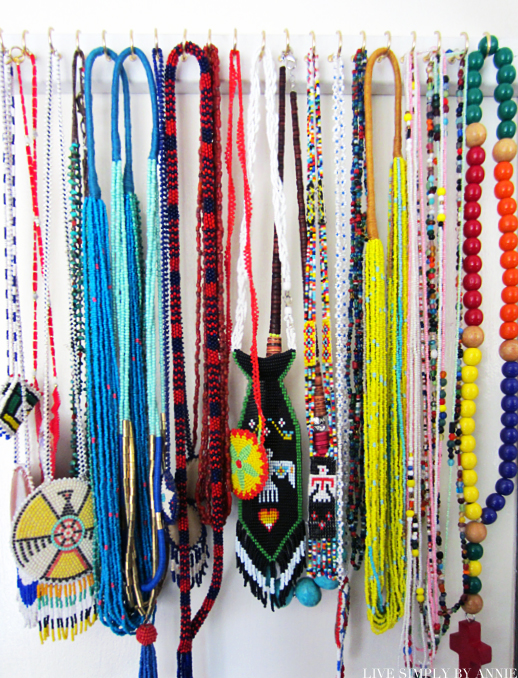 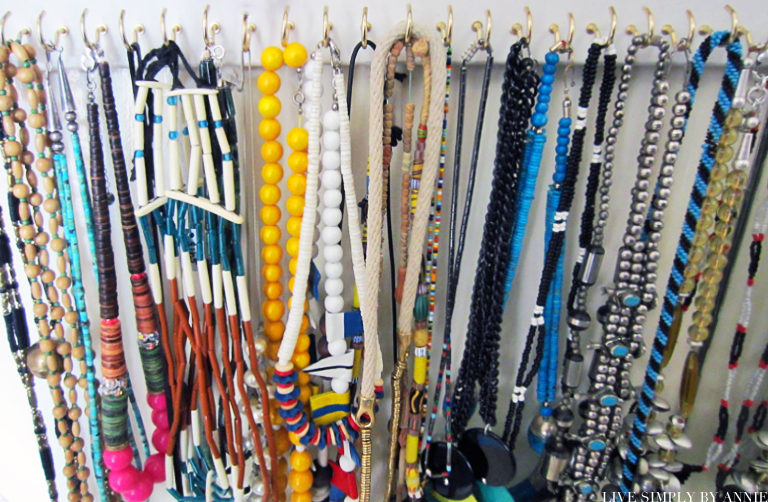 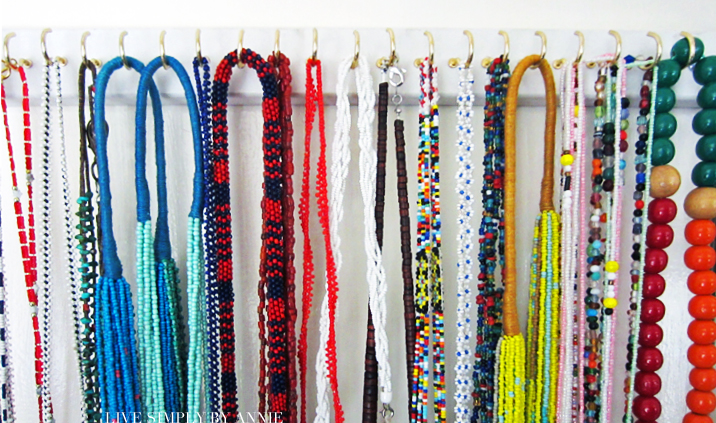 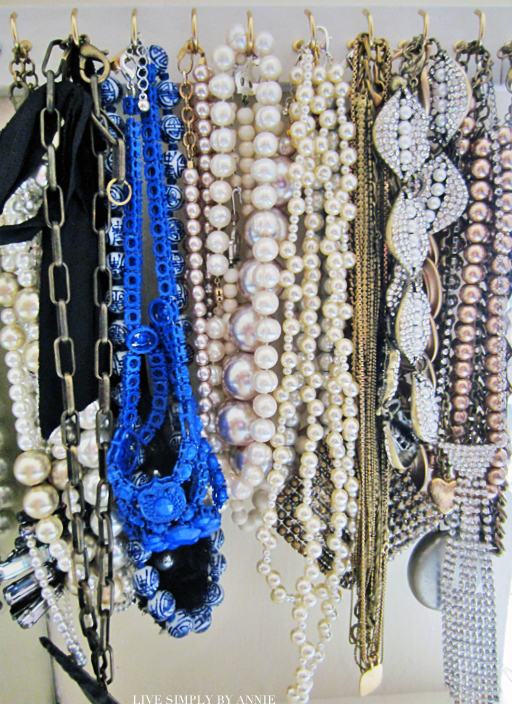 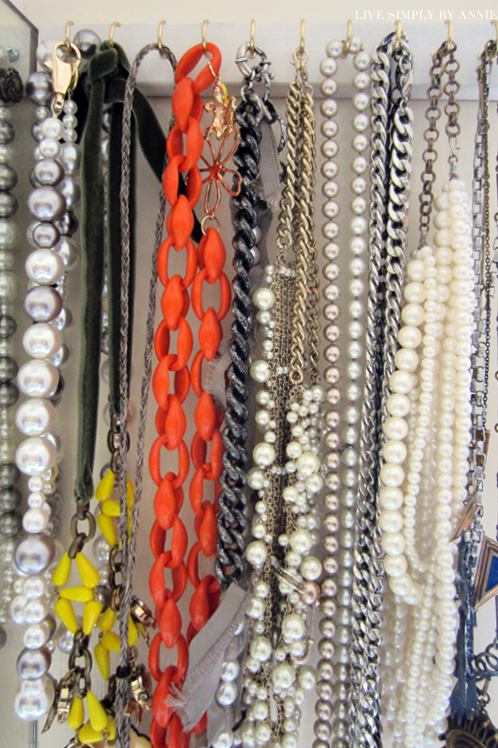 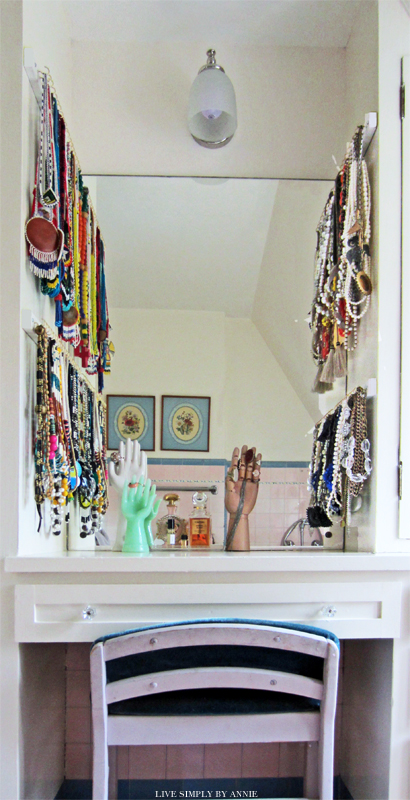 I was so through and through dang happy with the result, and that my client was too made it all the sweeter.

Afterward, when I went home and forgot the pains of creation much like mothers do that of labor I convinced myself that I had so much fun building the system that I should just go into the biz. Plans were hatched for exclusive Live Simply necklace organizer collections, each one in different colors and patterns and boy would it really catch on.