Let’s discuss the four areas of the bathroom which represent commonly wasted storage space, and which, if you’re a small-spacer, it behoves you to maximize to their full potential. These include:

1. The wall space above the toilet

Toilet is such an unattractive word, isn’t it? I mean toilet is toilet, there’s not much chance of recapturing chic once you’ve gone and brought john into it. It’s the activities associated with it see, although I do believe in some other countries it’s the preferable, perhaps even refined, choice of diction. But here is the real question: in your mind’s eye or ear as the case may be, can you plausibly make out the siren song of Grace Kelly uttering “toilet?”

Moving along from transparently obvious conclusions, the wall space above the latrine(?). This is easily the most under-utilized area in most bathrooms. It’s as if builders and homeowners everywhere are unable to differentiate between the toilet and the space surrounding it. Are there germs in the air hanging just above? And if so (I really can’t begin to bark up that tree, OCD beckons, see).

The good news is that pretty soon I’ll stop saying toilet, and also that adding storage space above one is an easy feat. You can either hang wall mounted shelves

or opt to install a free standing storage shelf that will rest securely above the toilet, such as an etagere 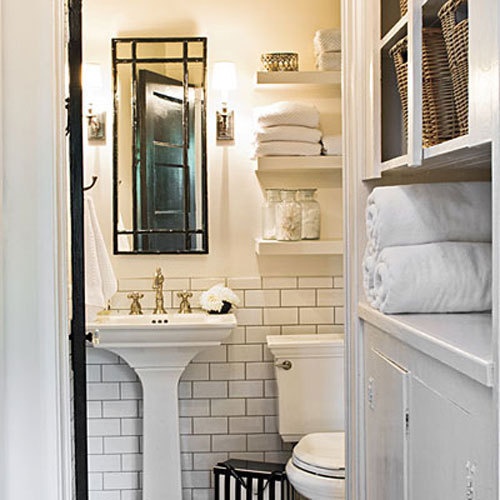 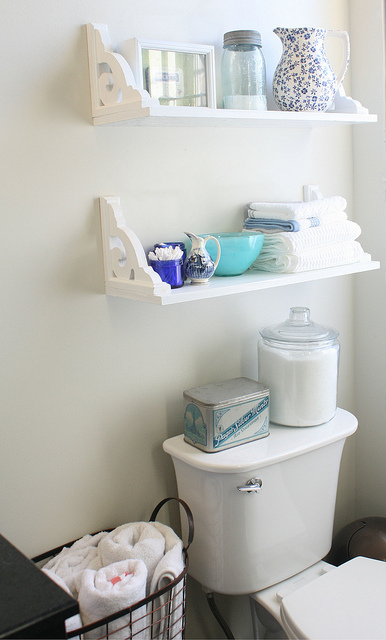 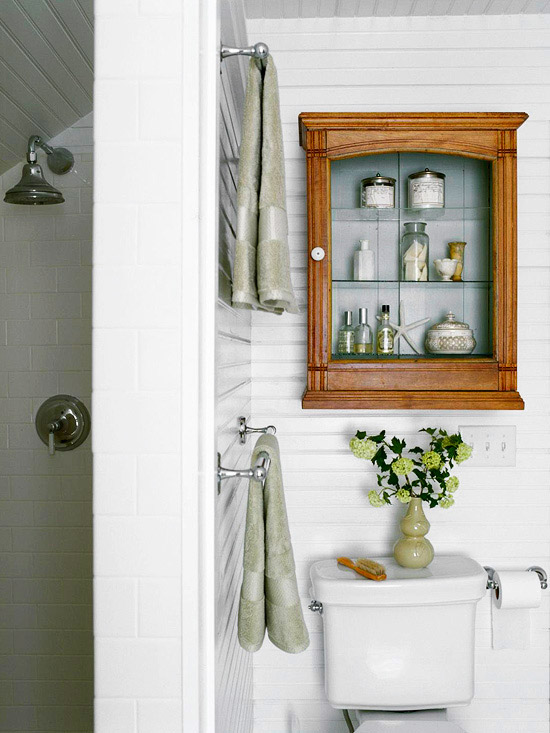 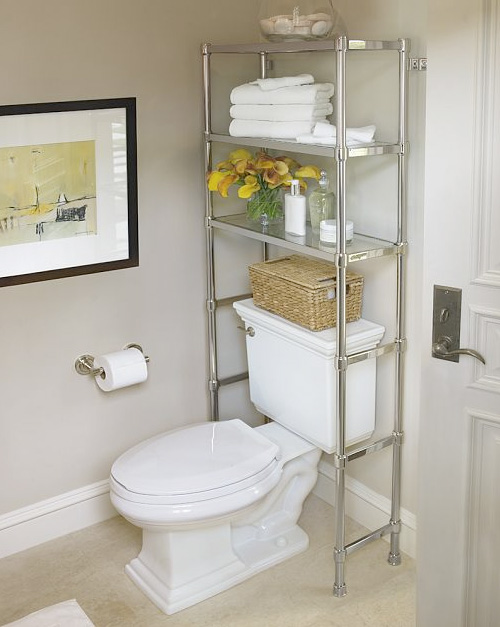 2. The back of the bathroom door

Again, an oft-overlooked nook, the bathroom door can be fashioned into a storage space by adding hooks or over-the-door caddy action. The caddy route will gain you a place for stowing cosmetics overflow. Perhaps more appealing, due to the issue of accessibility, is the rack/hook option, which can help you instantly attain more towel room. 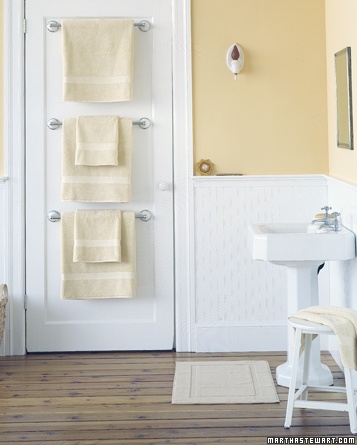 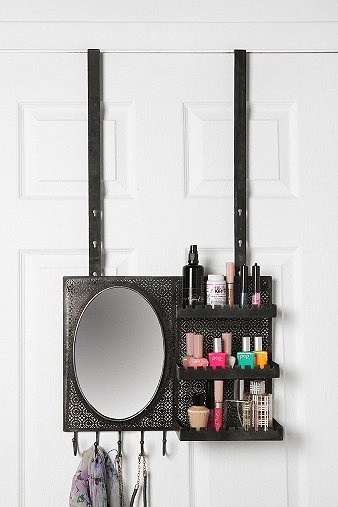 3. The inside of bathroom cupboard doors

If you have bathroom cupboards, then, by proxy, you’ll also possess cupboard doors. Ho–ly. Pimp those cupboard parts out in a similar fashion as you would the back of the bathroom door, albeit more miniaturized versions. You can choose an over the cabinet caddy

, or try for something more futuristic a la stick-on pods

. This is a particularly prime space for stowing hair accessories, as discussed previously in this post. Ka-bam! 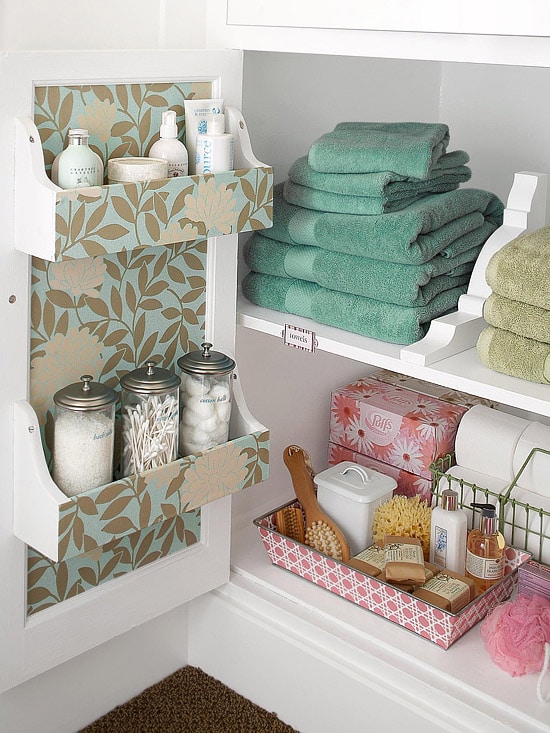 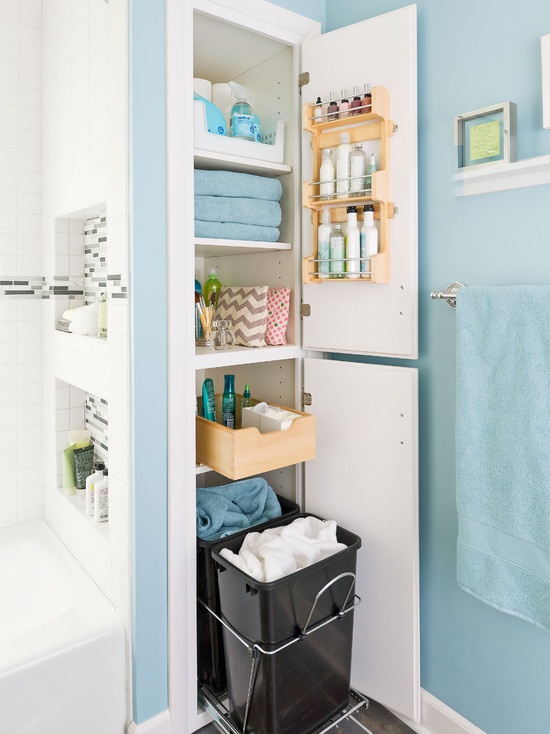 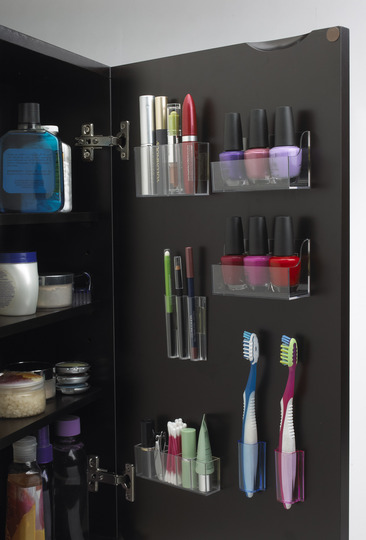 Behind door number 4 is the option to add storage space inside the shower. While the items stored within will necessary pertain to the water closet, which most likely excludes things such as cotton pads (unless you prefer yours soggy), and nail polish (unless you… are stranger than me). Still, the opportunity to instill organization should not be overlooked. At the very least, adding a shower organizer

will create a sense of order, even if it doesn’t provide more space (more on shower organization in this post). 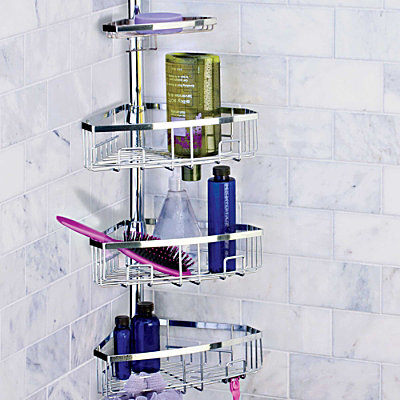 That’s that. Do you make use of any of these spaces? And if so, how? TELL.