Happy Leap Day! Belatedly. Anyhow, February’s over and done with, and just for you, here’s a list of the things I loved throughout. 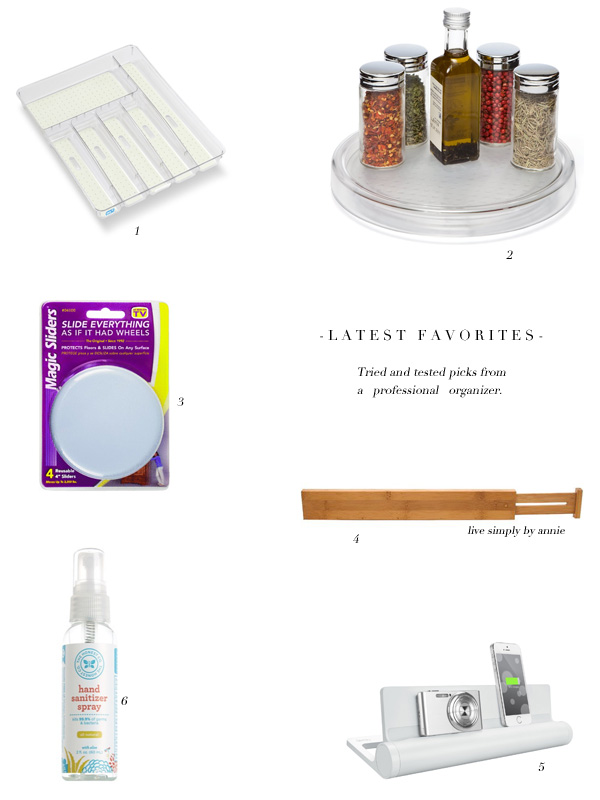 So, this is a cutlery tray. There are loads of them on the market and my rule of thumb is the one that best fits your drawer is probably your best bet.

That said, it can be really difficult on occasion to find a drawer insert that perfectly fits your drawer.  Expandable drawer organizers can often be the solution. But sometimes, even that isn’t an option in terms of dimensions. All you most want is a utensil tray that won’t go careening all over the place when you open and close the drawer. Because that doesn’t help anyone Live Simply.

Which is why I was so pleasantly surprised and delighted to experience the stability of this guy. The appointed silverware drawer in my client’s kitchen was awkwardly proportioned for an insert–this one was the best option, but it still didn’t fill out the drawer the way one hopes a drawer insert will. No matter; this tray has some powerful stay-in-place feet beneath, and so come hell or high-dish-water, it’s not budging a bit.

My latest favorite in turn tables. The best I’ve yet to spin by far. Found these pre-existing in a client’s space and was all, “hey, thanks for the tip!”

Whether you’re moving in the near future, or just rearrange heavy items in your house from time to time, you very well may need these. I certainly now do.

In fact, I feel real stupid-like that it took me so long to realize such things existed and would make the moving of furniture items in my client’s spaces so easy I almost can’t believe it.

You still have to finagle these disks underneath the legs or bottom of whatever you’re moving, but believe me: if you had any chance of moving the item without these, you are more than capable of heaving one corner or side up about a half inch at a time to slide these under.

Then, watch as that heavy armoire, chair, dresser glides like magic across hardwoods and yes, even carpets!

I’ve spoken plenty of times about these Bamboo Deep Kitchen Drawer Dividers, and, similarly, the Dream Drawers, but realized this month as I installed the shallow drawer bamboo dividers in multiple homes, that I’ve yet to shout them out in particular.

Let the record show: they are as winning as their deeper drawer counterparts, and as effective at cheating your way to custom cabinetry.

They’re perfect for keeping things like kitchen utensils in order, and have also come quite in handy in bar area drawers (no real justification provided here as to why, only stating the facts).

My client’s three daughters all charge their phones in the same outlet, which lives inside a kitchen cupboard. Also plugged into the outlet is a rarely used landline, and alongside all that hangs the entire household’s worth of keys, the everyday in-and-out essentials like hair brush, preventative lice spray, and many, many tubes of chapstick.

What that cabinet needed was a charging station in a hurry and I do mean rush delivery s’il vous plaît.

So I went with the cleanest, sleekest, whitest one I could find–all the better for establishing the aura of calm, my dears. This isn’t the most revolutionary product on the market–it’s still just a place where things get plugged in, after all. But the effect of concealing those many cords and providing a blank slate/stand in their place is not to be undervalued.

Plus, all the phones sit up at attention on the stand, making it real easy for client-mom to notice who has accidentally on purpose taken their phone to school with them.

No really, it’s getting worse by the day.

This month I happened to see a Dr. Oz interview about germs on planes and I haven’t been the same since. Spoiler: don’t you dare put your blessed head against that airplane headrest before giving it a thorough wipe-down. I did this after hearing him say it’s one of the germiest spots on a plane, and the initial embarrassment I felt at being the germ freak who wiped down her seat before sitting was immediately abated when I took the wipe away to see black. Actual black, thick dirt and grime. After that, I hoped everyone around would notice and comment on what I was doing so that I could have the opportunity to spread the gospel, pass out wet wipes, and instruct the entire plane to sanitize their seat. But I digress.

Naturally, hand sanitizer is a non-negotiable. And since this one is all natural, well, it’s kudos to Jessica Alba and I’ll take two dozen sprays in each palm and make it a double merci.