Hey-ho. I’ve got a little client project for you all today, one of the gift wrapping variety.

My client’s gift wrap cupboard was far from treacherous (I’ve seen some wrapping colletions that would knock you over and then tie to the rug with ribbon), but it was in need of some attention. Have a look-see. 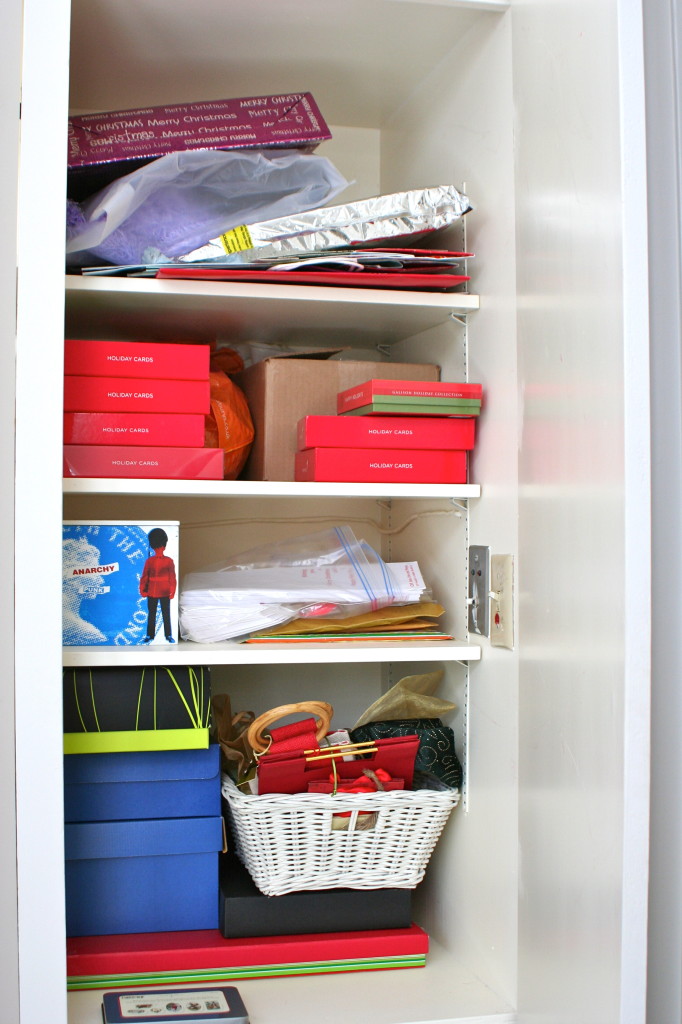 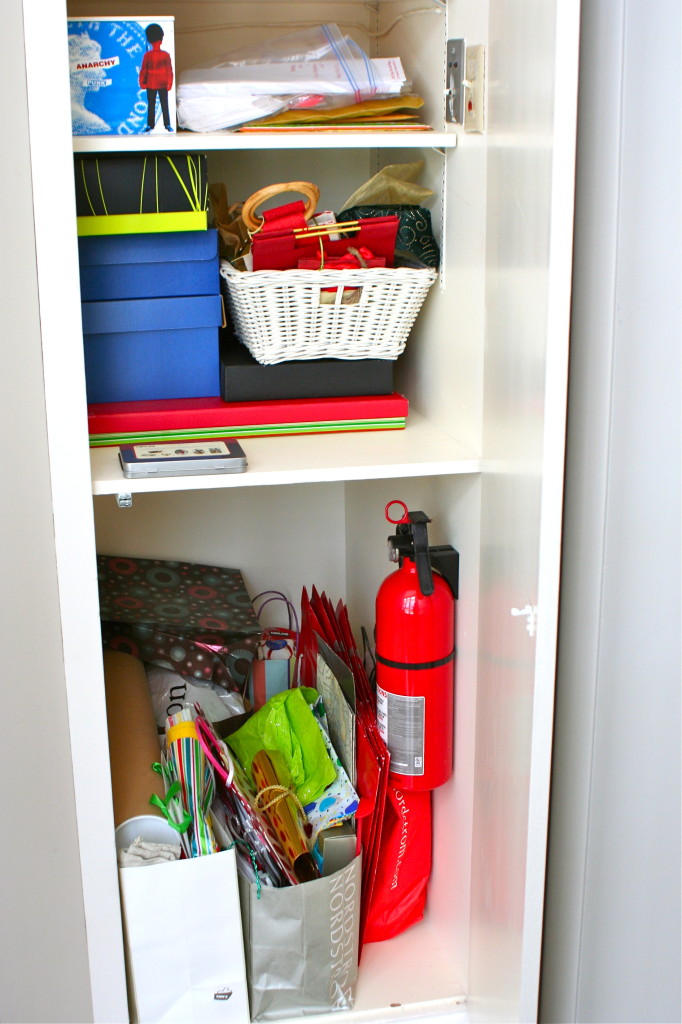 So naturally the first thing I did was take everything out and make a huge mess. Whoever said organizing is like looking at heart surgery halfway through or whatever was right, by which I mean that before you can be organized you have to make things look good and cluttered. 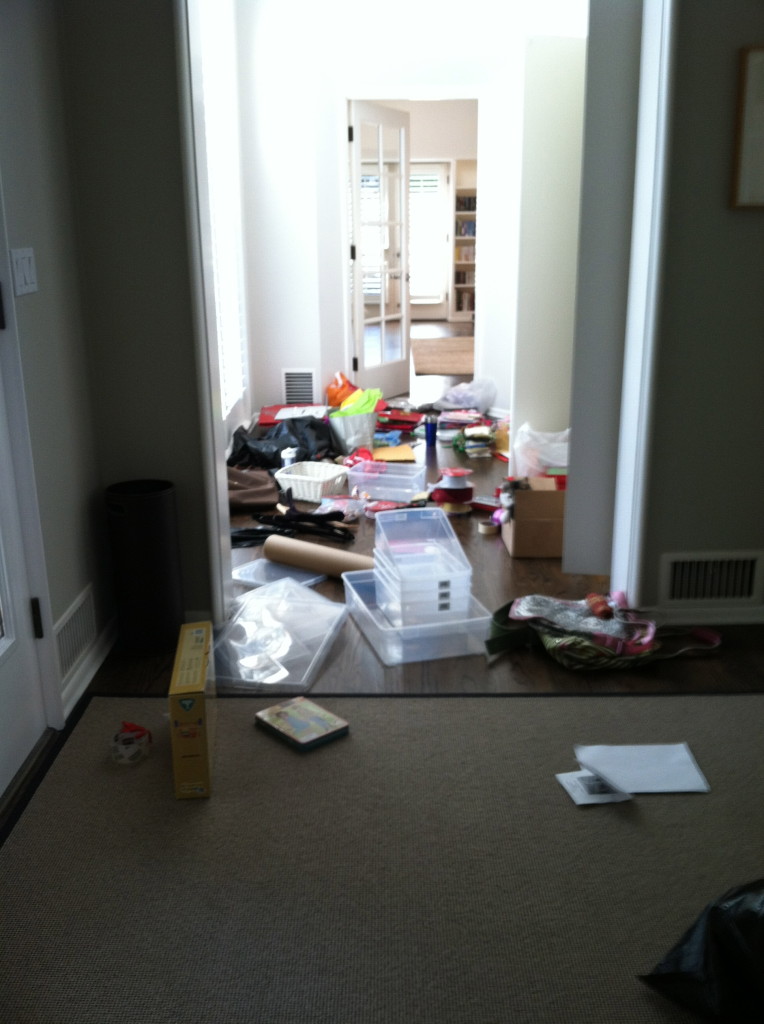 But you know, spreading things out is necessary.

I got to doing my thing, sorting into categories and such. The first group to move into their new home was the wrapping paper. All the paper (and there was a lot) went into this gift wrap box

, which, luckily, can hold nearly 30 rolls. So that was easy, done and done. 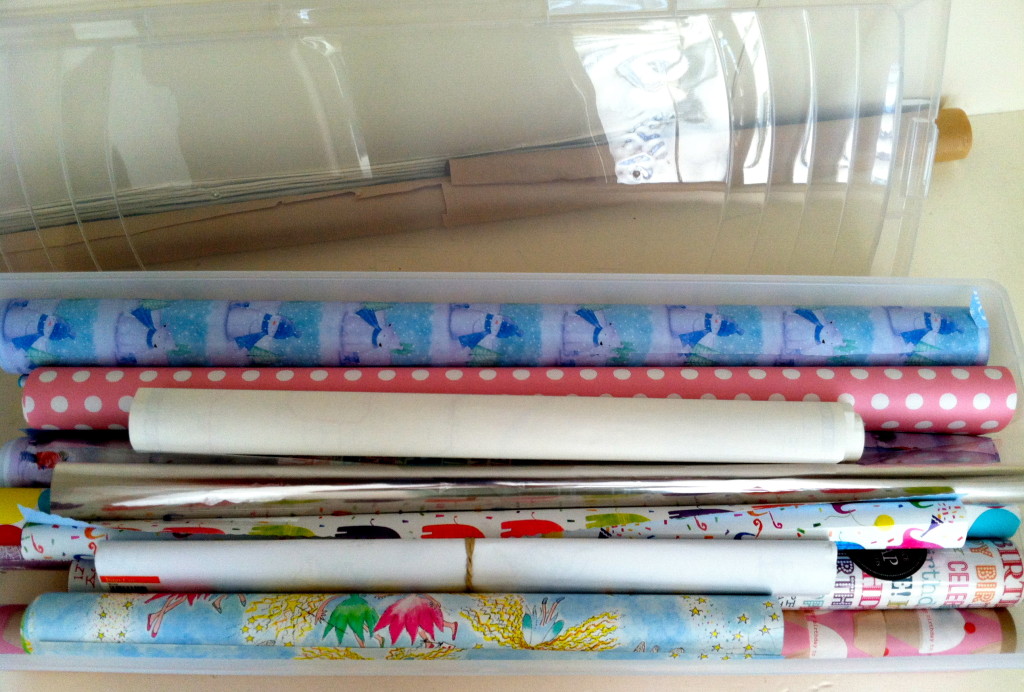 Next up was the tissue paper, which went into a boot box. I sort of half stacked it, half laid it down flat so that all sheets would be visible. (That white paper majorly bogarted the box, but ah well). 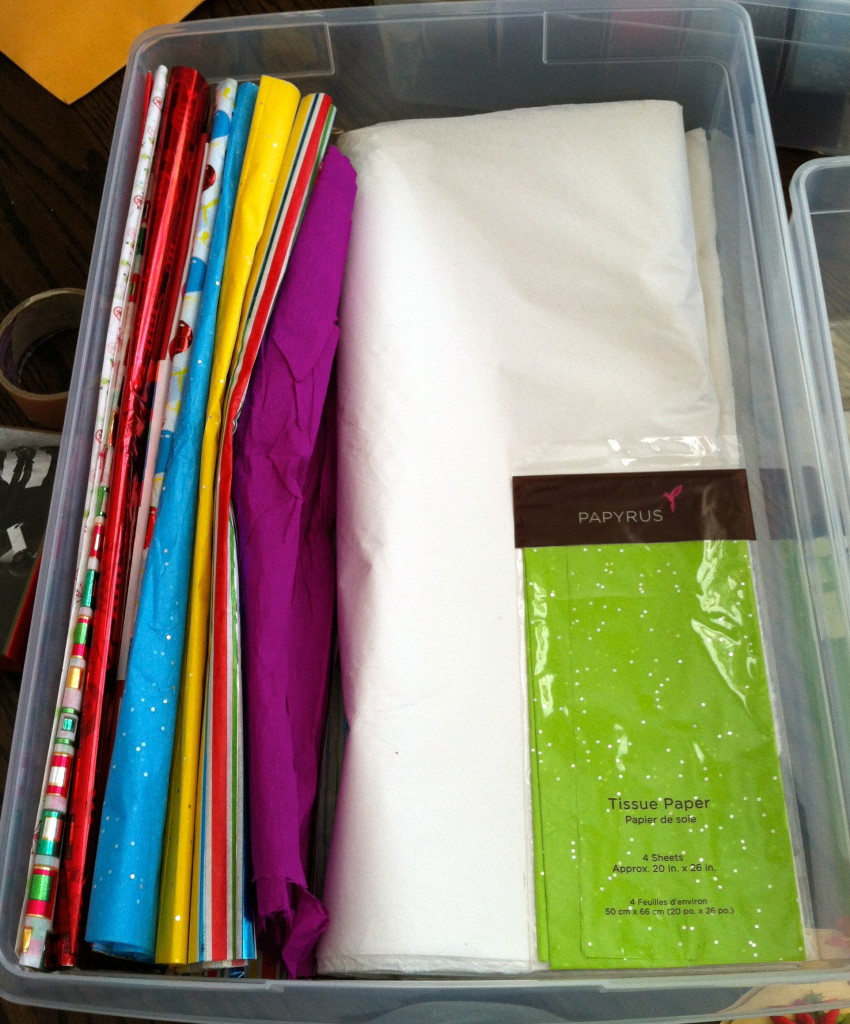 The ribbons went into a men’s shoe box. 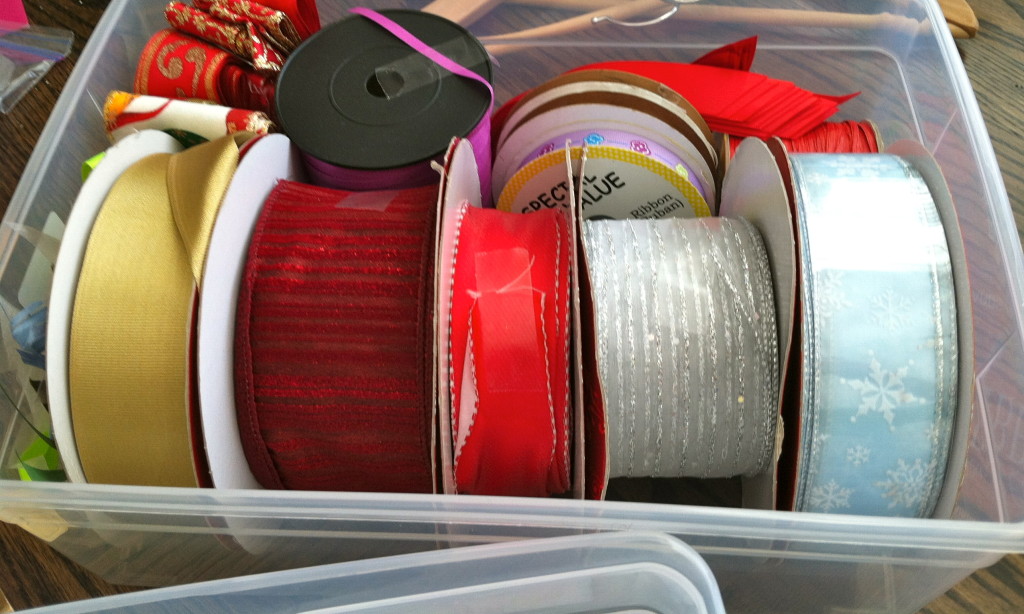 The gift tags, of which a very small sampling is pictured here, threatened to be annoying. But some ties twisted around the tag’s ribbons saved the day. 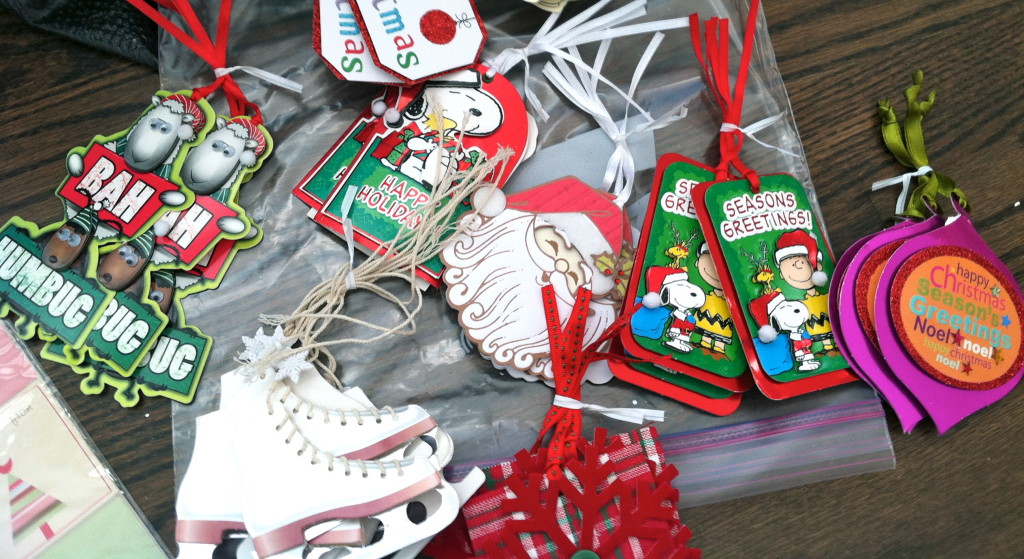 Greeting cards got sorted into a card keeper

and moved elsewhere (a more accessible spot) and the boxes of holiday cards were collected in another men’s shoe box. Gift bags for wine– an abundant category– also got their own box.

Then it was about time to pop the lids on, slap a label across the front, and put it all back. 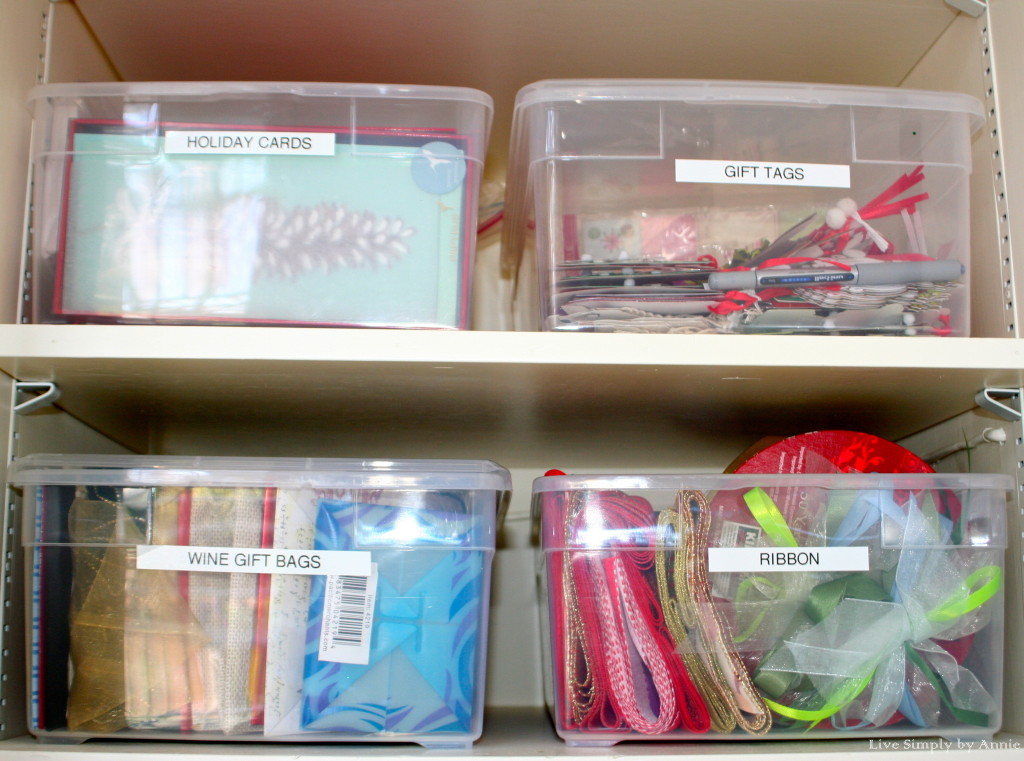 The gift boxes and mailing envelopes proved to be a nuisance, as they were too tall or too wide or two boxy in every attempted arrangement, so I ultimately just stacked them on the highest shelf–held upright by another shoe box containing bubble wrap, packing tape, etc. 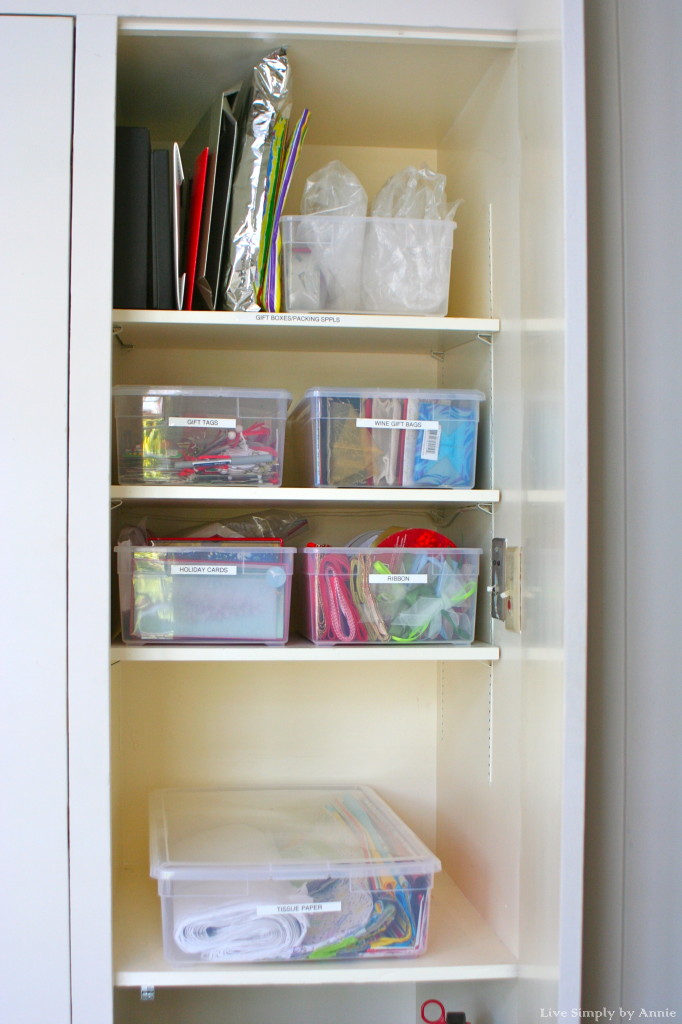 But oh, the bags. How I puzzled over those bags, as I always do. Once it was made clear that they were, in fact, sticking around, I worked on trying to figure out how best to do so.

Ultimately I decided that keeping them inside of other bags was in fact the best option, but I sorted them into specific categories, discarded the elderly ones, and then labeled the actual bag holding the others. 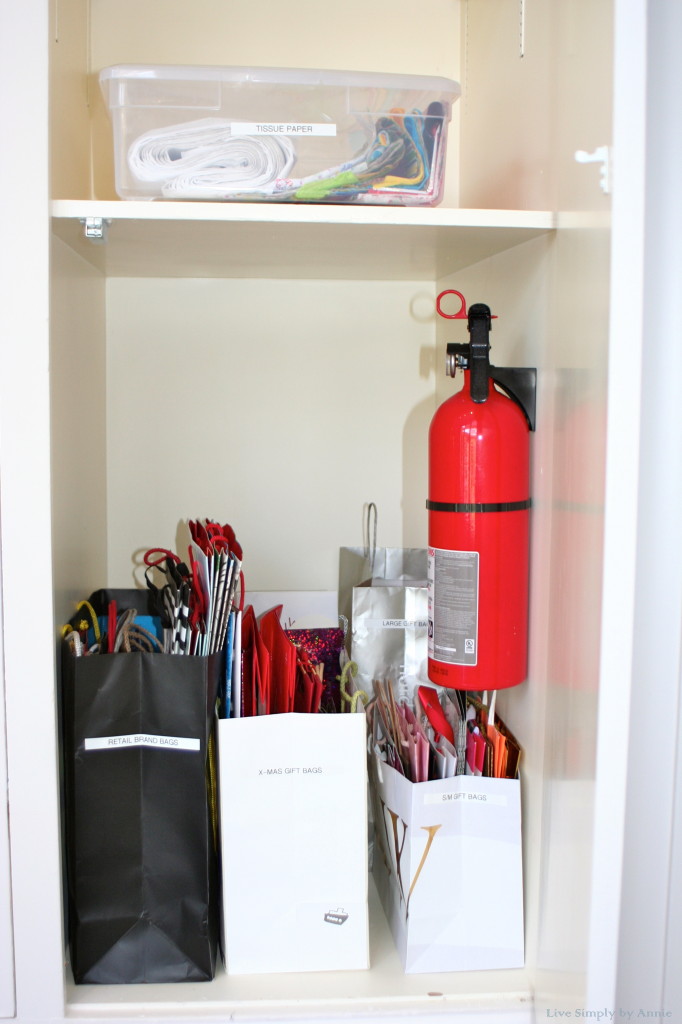 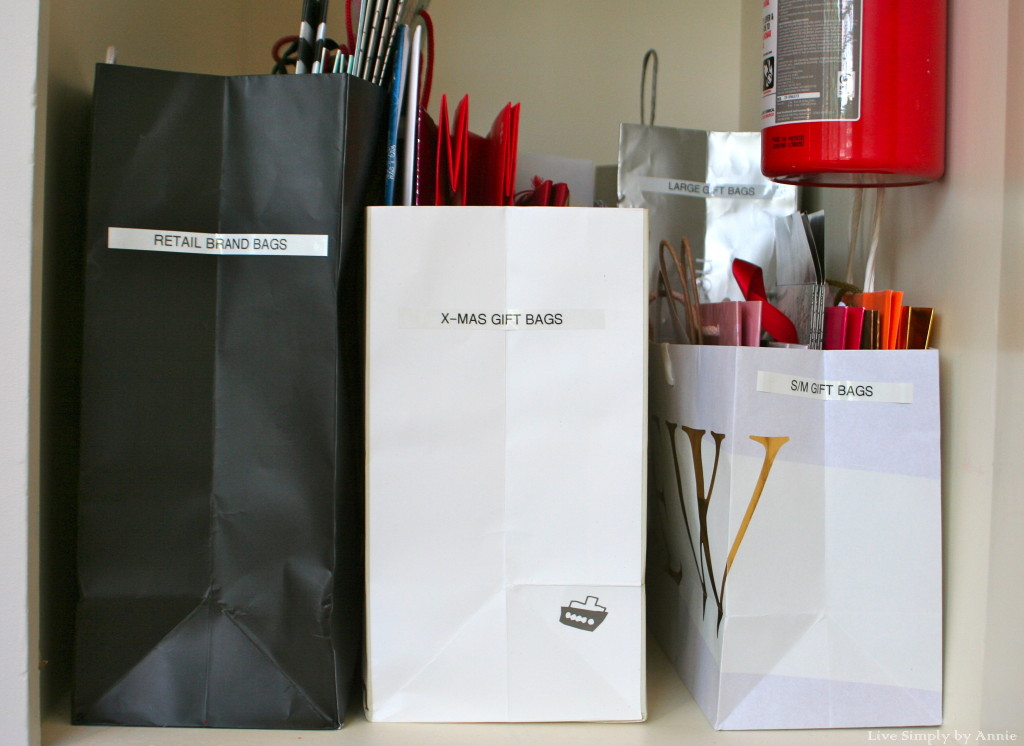 There you have it. Gift wrap, wrapped.

If You’re Going To Save Scraps of Ribbon…

How to Handle Greeting Cards You’ve Been Given