5 Tips To Make Goals That Stick

Most people find themselves in the goal-setting state of mind this time of year. With twelve months stretching out before you, untarnished and ripe with possibility, there’s no limit to the magic you might create. And if you really want to do that, I suggest you take a gander at the five tips below, for making goals that stick and such. 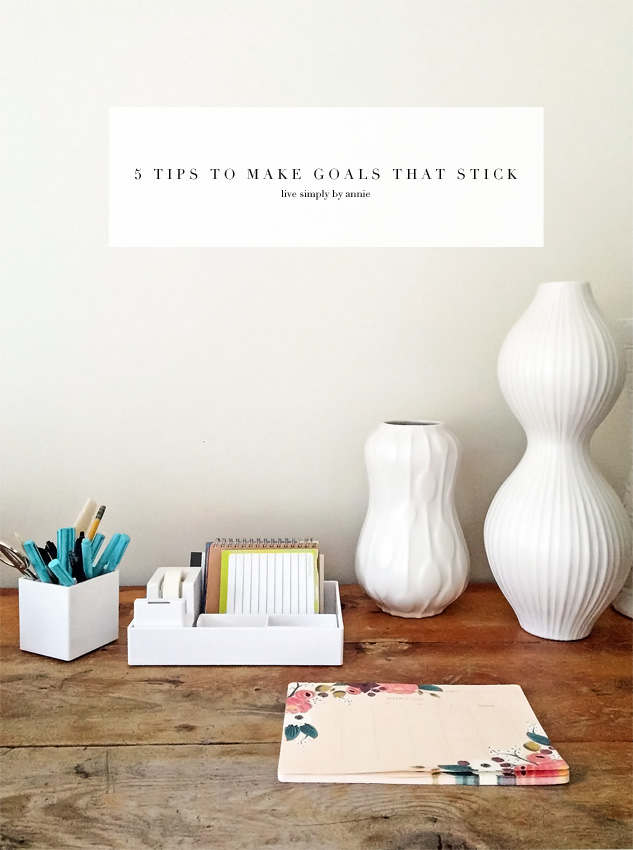 1. Make it when you mean it

There is nothing more harmful for your own sense of discipline and will power than failing to uphold goals you don’t make with the utmost intention.

Every time you half-heartedly make a goal that you then make little or no effort to achieve your discipline goes, “See, I told you so. Told you you’re hopeless. Told you you can’t stick to your word.”

Don’t set a goal because it’s the beginning of the year, because everyone around you seems to be setting goals. Set a goal when you’re ready and ready to commit the time and resources necessary to achieving it.

People are often pretty good at envisioning themselves achieving lofty and impressive feats, yet they aren’t as good at plotting out the individual steps needed in order to make that vision a reality.

This can either set you up to delay taking action, since it feels as though you have loads of time to accomplish whatever goal you mean to within a given amount of time, or it means that sustaining a habit or behavior can appear a daunting and impossible notion when you’re staring down the end of a calendar-year barrel.

So while it’s important to know what big potato you’re aiming for in the end, it’s crucial that you set smaller goals for yourself, and continuously build off of the momentum that accomplishing those goals gives you.

3. A is for Accountability

I don’t want to doom you, but if you don’t have some method of accountability, the chances that you’ll be able to fulfill your goals are slim. If no one else knows, or if it’s not written down, that end-goal and all the mini-goals leading up to it are mere flights of fancy flitting away in your brain juices along with all the other junk you’ve got up there.

Different types of people need and benefit from different methods of accountability, but everyone needs one. Whether it’s a private coach that’s checking in on your progress and helping you along step by step, or a tracking system in your calendar, you need some way or place that allows you to say “check!”

Figure out what method of accountability works best for you and get that shit going.

There is no denying it: breaking an ingrained habit is seriously hard work. Rather than trying to fight old, pre-existing habits, help yourself form new ones with the use of triggers.

For instance, plenty of my clients have, in their past, tried unsuccessfully to adopt the habit of being organized, despite their being chronically messy types up until that point. The goal to Simply “be organized” lacks any specifics, and thus, clients who made such a resolution found themselves the owners of seriously messy spaces again before long.

The shift occurs when we put systems into place for them, systems that follow their daily routines and natural chain of events. So rather than be expected to “be organized,” they’re expected to do things like pick up their clothes before they go to bed, immediately remove 1 item when a new, like one comes in, sort the mail before they take off their coat, and so on.

In other words, they’re adding in a new behavior or habit, rather than focusing all their energy on breaking old ones. And they’re relying on triggers like time of day to activate those new behaviors.

5. Prizes are for kids

So often people believe in and promote the “reward” concept when it comes to goals: good behavior and follow through deserves rewarding as a means of sustaining momentum.

Except, in most cases, the actions, themselves, should become inherently rewarding–especially if they’re things that undeniably better your quality of life and the life of your family, like eating healthy, exercising, and maintaining an organized space.

Rather than focusing on how you’ll reward yourself for doing what’s voluntary, focus on how the process is helping you be your best self, and, in that sense, are just the right and necessary thing for you to do.