Well call me a Youtube Beauty Guru, because I’ve got a roundup of my recent favorite products coming at you. 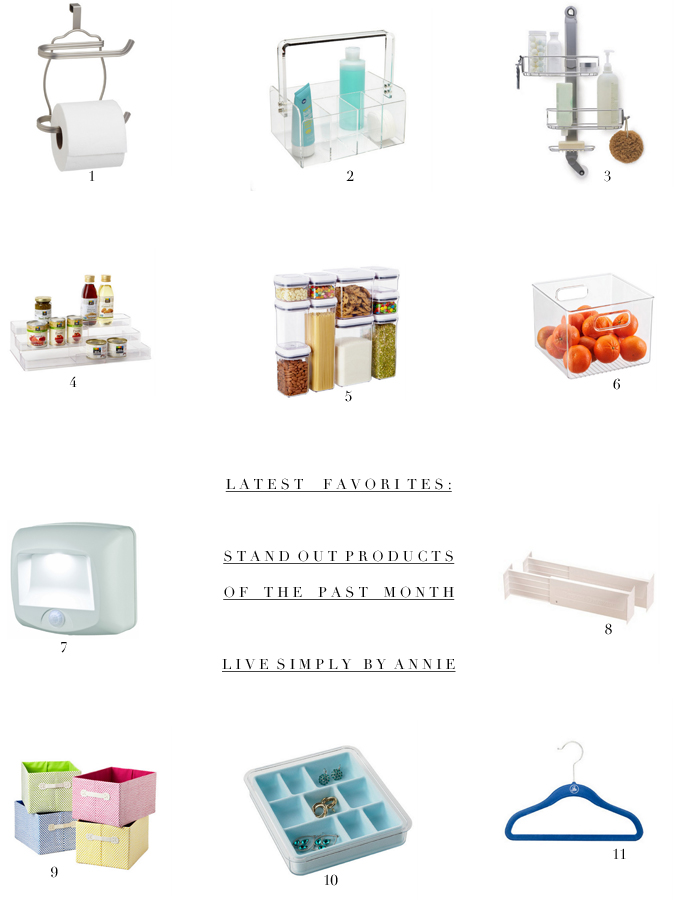 I test out a large amount of products on a daily basis, which naturally acquaints me with the good and the bad. Some picks just look so darn promising on the shelf, but once unboxed at my clients turn out to be big old flops. There’s lots more material there, in case you’re interested.

Today, though, the focus is on the good. And there have been those! The Container Store sort of became my home-away-from-home in January, and in I’m fairly certain my car could drive itself there at this point. Lots of shopping trips & lots of Live Simply & lots of things to share. And so!

1. Overtank Tissue Holder– This guy got popped into a pedestaled sink bathroom which lacked not only storage, but a toilet roll holder, too. The installation is such: remove the toilet tank lid. Hook holder over side. Bonus points for putting TP rolls onto the holder. Congratulations you’re done and can now get to the business of pooping with the peace of mind that a roll of paper is within arm’s reach.

– This was almost a mistake, until it wasn’t. Though it proved superfluous to the project at hand, my client insisted on keeping and finding another use for it, so cute was it, said she.

A couple days later she proudly trotted out her new nail polish caddy– a mobile hand grooming situation with everything from file to remover to polish. I happily deemed it a winning idea–sometimes the lady likes to polish in bed, so there.

3. Flip & Fit Shower Caddy– It was like this: my client’s master bathroom shower was in desperate need of an organizer. She likes her products and so does hubby, while their little man, 3 years of age, is partial to his bathing toys. So the bench in the shower was awash (a-ha, get it?) in bottles and dinosaurs and loofahs and tugboats and on and on. We needed a solution with maximum capacity that would also fare well (read: affixed to some surface, solidly) with a prone to flailing youngster.

Enter this Simplehuman shower caddy. With a hook and screw closure it’s securely held up on the shower head, while its bottom has a suction cup to keep the thing in position on the wall. The two upper caddies are movable, allowing for customization and large bottle accommodation, plus it’s got handy hooks for things like razors, toothbrushes, etc.

All in all, a winning shower product; I was impressed and my client has been quite pleased.

– These are so simple and I love them so much. Like they’re so nothing special really, except that they do exactly what you want them to. A tiered organizer is perfect for all those small things like spices, cosmetics, and so on. The fact that this version has an edge barrier is what sets it apart from other models. That it’s expandable to boot pushes it to the top of my charts. I have straight up depleted my local Container Store’s inventory because I’ve used them with so many clients and projects. Lucky for you, they are still available for order online.

5. POP Canister Set– A superior option in the food storage department. Airtight, with a middle pop-up feature that truly works perfectly, and with just the right heft. An organized pantry is closer than you think. Thoroughly recommend these.

– Another great, reliable product. I’ve been loving using these in both bathrooms and kitchens. I particularly enjoy the heft of these; they are not that flimsy plastic, but they’re not the almost-delicacy of acrylic, either. They’re just substantial. Plus, they have a handle for easy access, and their height makes them winners for deep drawers and taller objects, alike.

My client’s poor hubby had the darkest closet known to man. By which I mean, not actually that at all but that it was dark and could have benefited from some added light.

Now, I pride myself on my pluckiness. I’m not easily intimated and am apt to tackle a wide range of tasks, but the bottom line, which I can’t ultimately delude myself of, is that I am not an electrician. Nor did I really want to enlist one because you know, it was just one silly light.

And so it was onto The Amazon, where I discovered this guy. Two days later the box was in my hand and I was up on a ladder installing it, the hardest part of which was undoubtedly reaching the damn ceiling, and the easiest aspect was the light, itself.

Two screws (provided) get driven in the wall to secure the mounting plate, and then the light just locks into place. It takes 4 C batteries (not included). It’s daylight sensitive, meaning it knows not to come on when it’s not needed, it’s motion sensing, and it turns off around a minute or so afterwards. It’s made a world of difference in his closet.

[I do wish someone could have seen me trying to test this thing out though. Waving like an idiot at it, realizing there was too much light in the room, closing myself into closet, then waving like an idiot again. You know, standard Live Simply stuff.]

A long time ago now I wrote a post about how I was mad at these. But you know? They’re actually quite good. The key is: measure the drawer to ensure it’ll fit. Take it out of the box sort of gently. Situate it in your drawer and then leave it alone. Do that and these are such an easy way to instantly increase your drawer’s organization.

[For the record, my previous angst with them was their tendency to snap their springs. But really they only do that if you hold them and spin them around and play with them and tug on them and so forth but you wouldn’t do that because you are brilliant, aren’t you?]

Cute bins for small humans. The color options can appeal to both boy and girl varieties, and you know, bins!

A whole bunch of these in my clients bathroom drawer and it almost looked and felt as if it were a built-in jewelry closet drawer.

The cuteness. The best. The undisputed champ.