The Truth About What It Takes To Live Simply

There’s a certain book that dominated the home category for pretty much all of 2015, one which hooked its readers on the premise of tidying by promising that if done by the method prescribed, you’d never have to do it again.

One (thorough, thoughtful effort) and done.

Though I have a few qualms with the viral book in question (we’ll leave that for another day), I applaud its overall effect of motivating the masses to rethink the presence of the stuff in their lives.

Much as I hope to equally encourage you all to actually take action and Live Simply, I’ve promised approximately no one ever that if they edit the contents of their entire spaces, they’ll be set forever. In fact, it’s just the opposite: once you understand how to edit correctly and to Live Simply, you understand that editing is a process that is never complete. 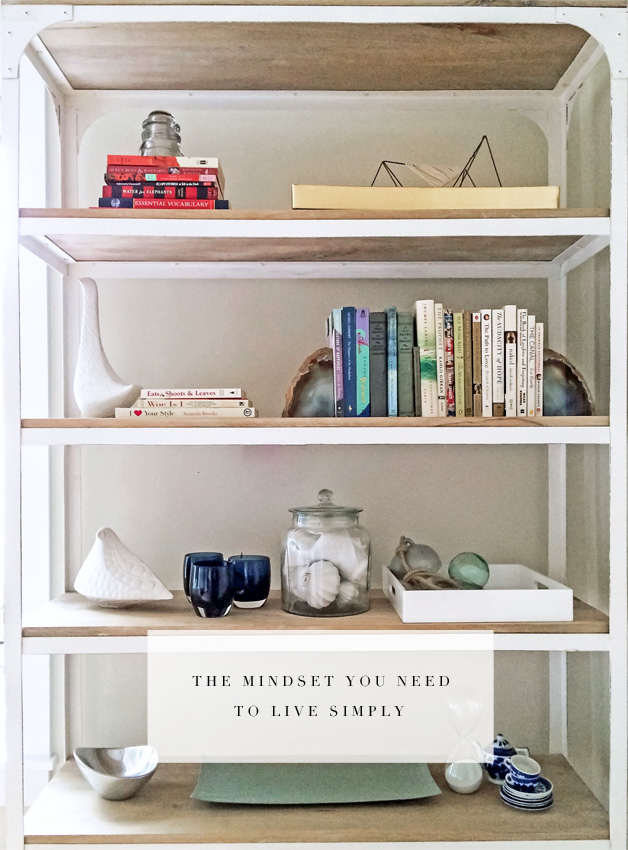 As long as you own things it is essential that you engage in editing.

The better you get at editing, the more you see that it’s much more of a constant, ongoing mindset than it is a fixed event.

How many of you have rifled through a stack of papers your eighth grade self saved and were mystified as to why you ever thought much of the pile was important?

How many of you have carefully saved and held on to items that years later you realize you didn’t need at all?

How many things have you initially said yes, keep to that sooner or later became no, that can go‘s?

It’s because you change!

Things have meaning for us…until they don’t.

Clothes fit us well…until they don’t. Until their seams before to wear and, beloved though a garment may once have been, we acknowledge that piece has had its day.

Books nourish us…until they don’t. Until they’ve served their purpose for us; we realize we won’t ever re-read that title, or that it’s turned out we never read that book once and are fine without it.

Decorative items delight us…until they don’t. Until we find something new we prefer that reflects our current tastes, or we decide we’re downright sick of staring at that clock after five years.

It isn’t a guarantee; there are things, like people, that we may love forever.

As we grow and change, adopt different perspectives on life and acquire new things it’s only natural that what lights us up shifts. How we feel about any one thing is not static, but fluid, existing in conversation with the rest of our belongings and the reality of our lives at any given moment.

That’s why to really Live Simply you must continue editing. Editing is about checking in with yourself and your feelings about what surrounds you. If you consider doing a feeling-check a one or three or seven-time major event in life then we’ve got some other things to discuss.

If you edit your whole life now, comprehensively, with the utmost intentionality, you will be set forever. If only you permanently adopt an editing mindset and anticipate that what you may prize today may well seem insignificant by year’s end. And that this doesn’t make you bad or wasteful or ungrateful but normal, healthy, and human.