The Most Common Organizing Mistake (& What To Do Instead)

There is one particular habit that every one of my clients confesses to doing prior to hiring me, and it goes something like this: 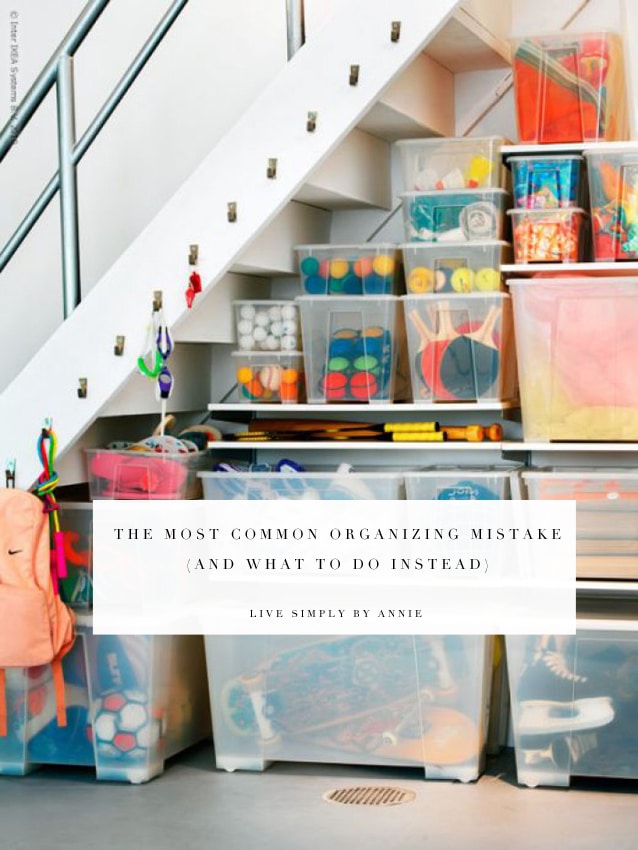 In a moment of overwhelm at the state of their space, they jump in their car, head to their nearest home goods store and buy another big plastic bin.

When they get home, they lug their newly acquired bin–or bag or box or basket– inside, shove a lot of stuff in it, and close the lid. Oh, and then they shove the bin somewhere really good (read: bad), along with all the other past bins.

The contents of all the bins are very mysterious to their owners and very much a random assortment of whatever happened to be in one spot in their house at that point in time. The closest comparison I might make of this habit would be to Andy Warhol’s Time Capsules.

If this behavior didn’t lead to such dire situations it might be kind of perplexingly amusing. As it is, it’s curious but overall, troublesome.

I don’t know who taught you that buying more bins was the ultimate stuff management technique but listen: they were misinformed, okay?

Storage bins, themselves, are great, I’ve got nothing against those. There are endless circumstances in which I would call upon them as a primary organizing tool. Feeling totally overwhelmed by the amount of stuff you have, the lack of systems you have in place, and the general feeling of having no idea where to start, what to do, or how to make things better, and thereby buying yourself another spot and way to delay actually dealing with things and having to make any kind of decisions just isn’t one of them.

Here’s what buying another bin and shoving a big pile of stuff in it is: a really, really unsuccessful strategy.

Here’s what would be better:  Don’t buy another bin. Don’t even put buying one on your to-do list and definitely don’t go to the store to fetch one. (When I instruct my clients as such, they look at me like I’m a dentist who’s just told them not to brush their teeth.)

Whatever sized bin you would have purchased (if you didn’t have one in mind let me tell you: you were going to get the biggest one possible) take that amount of stuff and get rid of it. Isn’t that fun?

However much stuff that would have fit into that bin, that’s your measure of how much stuff you need to eliminate from your space. It’s okay if it isn’t the particular pile that had initially caused you to mistakenly think you needed another bin. Pick any bunch of stuff you like!