Monday’s Meditation: On Critic Vs. Creator

[Massive apologies for the blog turbulence the past couple of weeks, and equally huge thanks to all those that messaged me alerting me to the issue. I’m thoroughly convinced this blog has the best readers in all of Blogland. All has officially been remedied (no jinxes, please), and it is now safe for you to move about the cabin/ proceed to get your Live Simply on.] 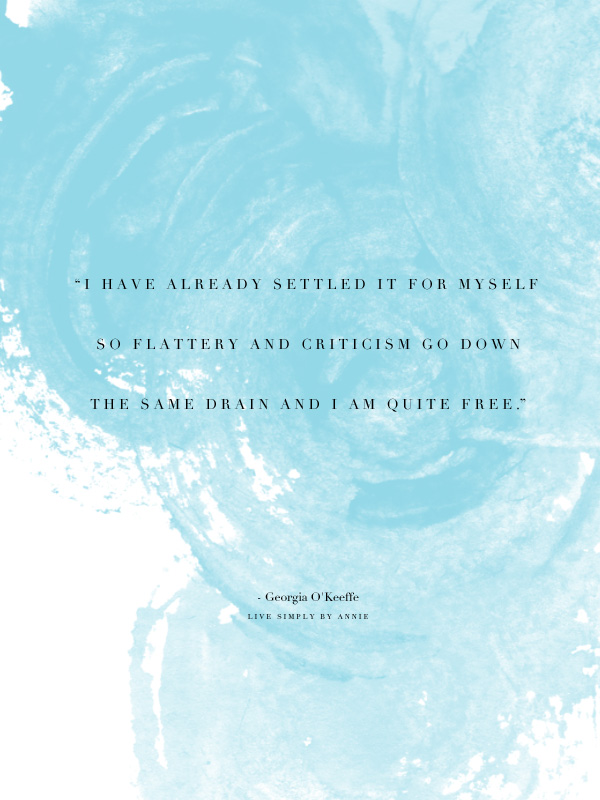 Last night were the Oscars (in case you’re living in a hovel and didn’t know), which is perhaps the most celebrated and glamorous festival of critique.

Before and after the handing out of awards to those deemed most deserving by the Academy–critics, themselves–there comes the dissection and analysis of the critics’ choices by further critics, bloggers and publications and media outlets of every kind. “He deserved to win,” they say. Or: “I can’t believe he didn’t win!”

By now, the Best and Worst Dressed Lists have been assembled in droves, each a slightly different rendition.

These critiques and judgments and accolades will trickle down through society, where we, the general public, will use them to inform what movies are worth our time to watch, which celebrities are worth fawning over and emulating. And which are free reign for the massacring.

Meanwhile, in Seattle (and everywhere else), the release of Macklemore and Ryan Lewis’s latest album is big news. And the fact that critics immediately weighed in, unsurprising.

Rumor has it, some critics are calling the album sophomoric (like maybe the song about the various food items the artist prefers?).

As if ‘whip nae nae’ is any more eloquent?

The critic is everywhere, now more than ever; there are Youtube channels dedicated to critiquing other Youtube channels, and websites centered around hashing out the lives of bloggers, and on and on.

But no matter the era, the role of the critic and of the creator pervades.

There is no more quintessential an illustration of this relationship in my mind than that of a modern art museum, where two people stand respectfully, albeit perplexedly, eyeing some glorified scribble or a series of completely blank canvases. One person turns to the other and whispers, “So, what exactly qualifies this as art?” The other shrugs. After they leave the hushed walls of the exhibit, one will insist:

“My gardener could mow my lawn while drinking a lemonade while making that,” the second will respond.

The insightful part of us will resolve the matter by concluding that the artist has actually created that piece, while we as recipients are merely hypothesizing our ability to do so.

We might be able to write a better song, paint a better picture, direct a better movie, choose a better ballgown, select a better winner, but until we’re actively and fully engaged in such acts, our potential ability bears no significance in relation to someone’s realized work.

From the critic’s seat, we make hurried judgments that roll like bowling balls down a lane, ricocheting off the bumpers of normal, foreign, ugly, pretty, awkward, and great. The critic is blunt and clunky, and usually too distracted to realize the world of creation they aren’t privy to that went into the entity they’re judging; that every decision involved in creation was no doubt made with the utmost care and thought. That no aspect was left unconsidered: the angles, the size, the colors, the scale, the effect, the casting, the rhymes, the accents, the script, the fabric, the fit.

It doesn’t really matter whether we understand the significance of four white rectangles hanging adjacent to each other on a wall or the decision to don a butterfly-adorned dress on a carpet. We don’t know whether or not the creation has failed or succeeded. Only the creator knows this.

What looks to us like a baby’s first scribble may be hours of thought and care and intention. And though we might go home and copy it, those two entities will never be the same in their nature because of the difference in the manner in which they were created.

In the end, since we have no real authority to label what someone else creates as variants of good or bad, we would do well, instead, to own our interpretations for what they are: personal perceptions, nothing more.

Because, after all, nothing we’re saying is really about the other person and their work, but about ourselves and how we view the world.

Anyhow, in the end, it’s still vastly and richly more rewarding to actively lead and create our own lives than to provide commentary on another’s.

Between critic and creator, be the latter.