A couple of weeks ago, I had a first session with a couple who is expecting their second baby very soon (within a matter of days, now). They were adorably excited to be working with me, and both relieved themselves of other commitments in order to be involved; the husband had come home from work early, while his wife had ensured their nanny could be on duty to care for their toddler.

After a tiring bout of editing in which I asked them approximately a zillion questions about their daily routines, I sent them away to take a TO.

What followed was something rawther magical: they sat and talked to each other. Not just talked, but planned. They formalized their entire birth plan, down to the role of the mother-in-laws, and the timing of when their toddler would first meet their new baby. They took notes, they strategized, they doled out tasks. Though they had been somewhat harried prior, throughout the course of the conversation, their tones became more and more light, clarified, and excited.

I did everything I could not to need their involvement again for as long as possible. There was a window happening and I, for one, didn’t want to be the one to close it.

When I left that evening, both seemed as though a weight had been lifted from their shoulders. They thanked me repeatedly, telling me it was the best night they’d had in some time.

My presence had been the catalyst for necessary and focused communication, and I was like, Hey! Call me anytime! 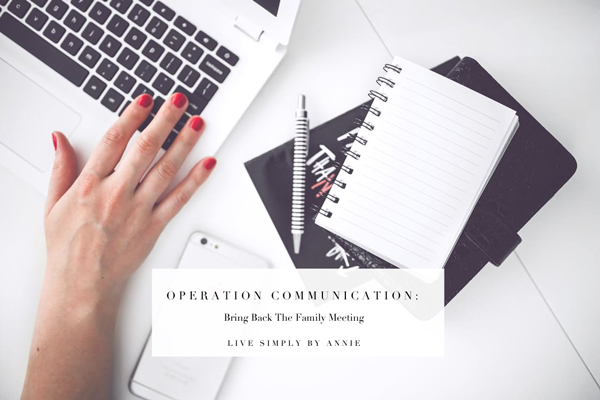 Most of us communicate things to our family and friends in the most haphazard fashion, which is to say: whenever a thought occurs to us.

We shout it from one room to another. We send it by text. We relay information about upcoming appointments, travel plans, social obligations, and more, before we forget to. And then we rest easy, thinking we’ve done our part to pass along the necessary information.

Meanwhile, everyone else is doing the same thing to us: texting us questions about whether or not we can be the one to attend Parent Night at school while we’re in the midst of diffusing a major child meltdown. Or shouting a reminder about an upcoming work dinner we’re expected to be at while we’re in the midst of juggling making the pancakes, babysitting a call to a customer service number (whose “your call is important to us. Please continue to hold” refrain is more than starting to drive us bonkers) packing school lunches, and directing the handyman as to where the leak was originating.

We might hear them. We might read their words. We might even say, “Okay,” but as the communication lacks intentionality on both ends, we may not be prepared to absorb the information. The important reminders disappear into the furthest recesses of our minds.

Personal communication that lacks structure and focused participation on both ends often results in one party standing there in their ripped pajama bottoms with kid-boogers on their shirt going, “We are??!” Or, “I am??” And: “I don’t remember you ever mentioning this!”

And then, on the other hand, there is the scenario in which two people who share a bed or a mom or a car plan a time to sit down together on an as-needed, or a weekly, or bi-weekly basis to communicate important pieces of information. A scenario in which both parties understand that schedules and commitments are going to be discussed, and as such, come armed with their calendars, and a piece of paper and a pen, if need be. A scenario in which everyone gets to fairly provide others with pertinent information and a sufficient amount of warning, and reasonably expect the other to absorb their words.

Don’t tell me that’s fairyland. Don’t say it can’t be done. Most people do this type of thing every day at work.

And when it comes down to it, don’t we want to give the people we really care about most the same kind of focused communication that we give to our work colleagues?