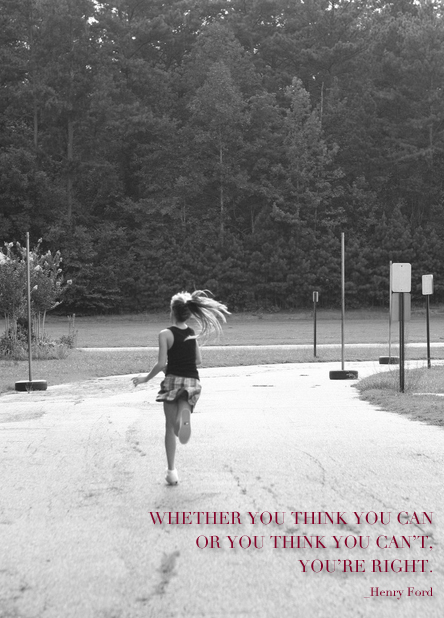 I am a person for whom things have come easily, an irritating fact that’s nonetheless true. When I was younger, I excelled at most things I tried with trying: I naturally comprehended school curriculum, I made friends easily, I liked a boy, he liked me back, etc.

Running wasn’t one of those things that came easily.

I had heard rumors circulating, whispers of the infamous “mile” trickling down from six graders, maybe even a preemptive announcement of the forthcoming athletic pursuit made by my gym teacher, Mr. Honey. But nothing and no one sufficiently prepared me for the grueling agony that was running the mile. I just arrived at gym class one day all decked out in Limited Too gear and newly formed little boob-buds not knowing any better and told to run.

Looking back at that moment, I feel as though the chips were stacked against me, that someone should have sat me down beforehand, warned me, “Annie, this is going to be hard. In fact, if it’s not hard, you’re not doing it right. And then you just keep going anyway.” But no one said anything remotely like that, you see. And so it was that I made it I don’t even know how many pathetically few feet or yards before I found myself in a world of overwhelming physical discomfort. Gasping for air, groping and poking at the cramps that seemed to reach from one side of my body clear through to the other, I stopped to walk, watching as my classmates whizzed past me.

It was the worst day of gym class that a fifth grader has ever had to suffer through. Maybe. I hated Mr. Honey—why was this necessary again dude? — I resented the prepubescent bananas out of those fleet-footed friends that acted as though they’d been bred from generations of world-renowned marathon runners, and needless to say, I felt less than over the moon about my own self. This running thing introduced a sensation that was foreign up until that point; it was a hot, muddy gush of inadequacy that coated my lame and limping limbs as I ambled over the finish line. I felt embarrassed—I, who was supposedly good at things, who had a reputation for being so functional in the human being department, I sucked.

And so I taught myself that I was terrible at running. From that day of gym class on, I spun myself a story about being an unskilled athlete, and I clung to that belief fervently throughout the years. You’re really more the bookish type, Annie. And, yeah, well, you should see how fast my thoughts are!

Sometime in high school, for who on earth knows what reason other than maybe there was some cute boy on the team, I proposed to my friend that we join the cross-country team. And then she confirmed all my worst nightmares in life—she agreed.

So there we were, in these totally unflattering navy blue uniforms, shorts with built-in underwear contraptions I had never encountered previously that not only showed but proclaimed to the world the very grave unattractiveness of my knees (don’t ask it’s a sore spot) and just like that I found myself back at that moment, being told to run.

It was as if the gun had been fired at some Olympic starting gate and the runners, poised like statues on their marks immediately bolted forward with a force of kinetic energy that perhaps produced a kick back not unlike that of a gun. And I was among them, wondering what in the world I had gotten myself into.

But then I was still an absolutely wretched runner, and so in an instant the other runners had passed me, had lapped me. Twice. I don’t remember if I finished in last place or maybe third to last, it had to have been third-to–saved from the embarrassment of last place thanks only to the shortcut through the woods that a couple other teammates taught me.

Nothing of note happened that day at practice, no important announcements or coaching, but somewhere inside me, something shifted: I got angry about it. I got good and angry about sucking at running. It was total BS. I was in perfect working order, same as my teammates. There was no reason I should be so shamefully bad. And as I got more and more frustrated, I sort of started to like running.

I mean I hated it. Don’t get me wrong. It was the worst thing ever conceived. Who on earth ever thought this was a good idea? Why? Run? Why? Get the car. And such. But I sort of started to like it-hate it.

And then college. Freshman year. And dorm-life. And complete and utter misery. I had a roommate who was most likely probably clinically really you know really unbalanced mentally and sharing a shoebox with her was unpleasant to say the least. Classes were hard, and I missed home, and I didn’t want to return to the hell-in-a-pre-med-student that awaited me back at my dorm, so I went to the school gym. And I got on the treadmill. And I ran.

I ran and I ran. I ran until I forgot I was running. Until I forgot what it felt like to not be running. Until I forgot how to stop. And in that dingy, yellowing gym, on that two feet-stretch of black padding, I found out I was powerful. I discovered that if you met that threshold of where it started to feel uncomfortable and then continued pushing past it, you could transform into the most powerful version of yourself.

I went back the next night. And the next. Until it became my nightly ritual. Until I became addicted to the high. And I just kept on going. I ditched the treadmill and ran outside. I ran hills and tracks and made up routes. I ran in the dark. I ran in the snow. I’ve been running since then. Running through every city I’ve lived in or visited. Running through seasons. Through precipitation of all sorts. And somewhere along the way, I’ve become a semi-master runner.

You know how it feels when I run now? It feels awesome. It feels like I want to flag down every passing car, wave my arms in a frenzy and shout, “Are you seeing this? I am flying! Check me out!”

Very far away in my memory now is that little-Annie, squinting in the afternoon sun, clumsily circumnavigating an Indian Village city block. It turns out what weighed her down, perhaps, was the twisted blessing of the ease of acquisition. She didn’t yet know how to fight. How to really struggle with something, to be okay existing in a place of discomfort long enough to push past it.

Now I just cruise, steady. My body moves in sleek, sure strides. Inside, my thoughts are slow, well- formed, focused.

I don’t know if it’s that every time I run I feel a giant sense of accomplishment, a proving to myself what I’m capable of after having mastered what I used to be foul at, or if it’s just inherent in the act of running, but either way, I know that what I feel when I run is profound.

When your mind and your body work together in perfect tandem to propel you forward, when you at once seem to disobey the natural order of walking in order to move and recognize that by running you’re attaching yourself to the longest line of humans whose bodies are built to do nothing else but keep running, when you press on even though your shin hurts and the hill is steep, when you set out to do something and you do it, and in the rush and flurry of all that activity, a sense of calm verging on spiritual overtakes you:

You are powerful. You are a well-cared for, supremely conditioned creation. You are flying. You have left behind the stresses that nagged you back at home. You are, when you run, the closest you will ever come to feeling free. Utterly, fantastically free.

I wonder, what did you once tell yourself you were bad at and always would be? Some skill that you’ve now mastered that trounces those old doubts? Or maybe it’s a theory you’re still telling yourself. Either way, I would love to hear. Share it in the comments below if you’re so inclined.