Monday’s Meditation: On The (Un)Importance Of Brand Names 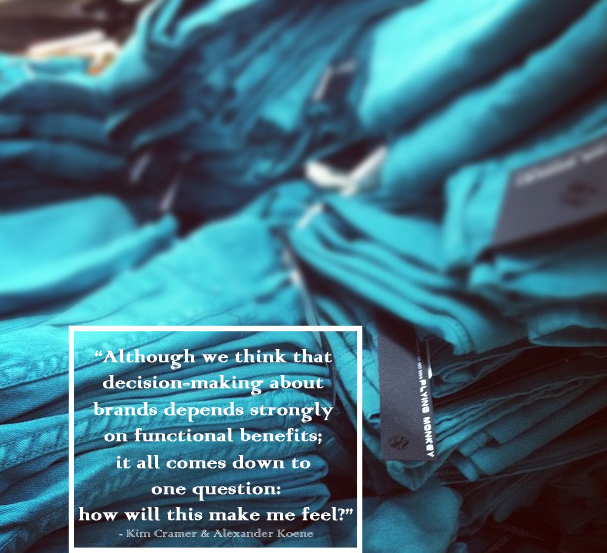 In the midst of a recent chat about the bevy of avenues one of my cohorts might pursue, she employed the phrase “brand names” in relation to various post-collegiate programs and institutions; a “brand name” school, a “brand name” program.

While she seemed to think nothing of it, I became stuck there, stuck contemplating that phrase. My lovely has great depth and a sophisticated knowledge of the workings of the world, which only made her use of those two words all the more intriguing: what is it about these “brand names” that influence us so? How does the manner in which we regard them reveal information about us? Are we all just sell-outs? Hopeful sell-outs? Given the chance, how many of us would trade in our non-brand named commodities for branded ones? And finally, are we all, in regards to this topic, just incredibly jaded?

I came late to the game of brand names. I attended school far outside the mainstream, and my middle school years, which is perhaps when I might have awoken to the realm of brands, were void of them. My steadfast favorite article of clothing during those years were a pair of totally nondescript blue jeans from some dumb-regular place like Kohls. Those jeans were unexceptional in every way; no special distress marks, no unique wash, not even a pocket design to speak of. But damn if I didn’t think I was the hottest thing to ever walk the playground at recess in those pants.

When I entered high school i.e. mainstream society, I suddenly found myself burgeoned by brand names. How uncouth were my Kohls jeans; how naive my fashion choices. In high school, socially acceptable girls wore 7 for All Mankind jeans, easily recognizable by their distinct pocket embroidery. You better believe I quickly ascertained that fact, that I even more hurriedly went out and got a pair for myself.

It was only a matter of zipping that fly on my new duds before I was drunk on the power of the brand name. I had never realized how much a person might communicate with the simple stitching pattern on their butt pocket. I hadn’t, up until that point, considered that any other factor might trump function; it isn’t about simply covering up your bottom half, no, little Annie, it’s about how you choose to cover said limbs, what ilk you wish to belong to merely by virtue of your pants, what assumptions you hope others will conclude based on those choices.

For a while there, I’m embarrassed to admit, I lived in that world: everything had to be a brand name. Things were no longer things but brands of things. A sweatshirt wouldn’t cut it; only a velour Juicy zip-up with a silver J zipper would do (god, it took real strength not to puke upon typing those words). Warm boots were nothing compared to Uggs, and cars– don’t even get me started.

But you want to know what? It was all a cover up. See, my schoolmates felt to me to be in a different league. They had been bred of the mainstream culture, they were well-versed in the language of brands. I was a newcomer. I didn’t know shit. And so I was desperate to prove myself expert; I would out-brand even them. I would own four pairs of Seven’s just to assure them of my fluency.

That’s the thing about brands: the people who stand behind them are often the ones too scared to stand out there on their own. The people preoccupied with employing the power of the brand are usually the ones who need them most. They are seeking inclusion to an elite group for the privileges they believe they will be gain upon entry. They want to encourage specific evaluations about themselves by outsiders. They want to be accepted, they want others to know they have been, and mostly, they want the brand names to do the hard work of inoculating and progressing for them.

Brand names are identified as the elite out of an endless sea of other brands. So naturally we believe that must mean they are of superior quality. It is the rare case in which we actually stop to do our own research to validate such thinking; rather, we are in the habit of relying on the preconceived notions about such brands. Sometimes all it takes is a closer look to reveal that the brand name and the off-brand aren’t composed of such different components after all. We won’t soon forget the upset that occurred when it was revealed that the Ralph Lauren 2012 olympic wears were, in fact, manufactured in China, a fact which called into question not only quality, but brand authenticity as well.

I don’t mean to stack brand against brand, to tear down every one you hold dear. I merely wish to point out that just because a brand is well-known doesn’t guarantee its quality, nor does it ensure that brand will be the right fit for you, nor that you should try to alter yourself to fit within that brand’s niche. Brand names are, at their essence, further specified categories in life– categories being what our brains rely on to glean information. And thus, I can’t really hate on them too thoroughly. I can’t wish them to be abolished. But I can say: in the end, we don’t ever really need them. Extremely successful people may call Harvard their alma matter, sure. But for every one of them, I am willing to bet there are three people who never even made it to college, people who are, if not just as successful and financially sound, than even more so.

If you find yourself privy to a brand name anything, I hope you accept it with a happy heart, and I hope it serves you. If you find yourself unable to get access to them, I hope you know that you’ll still turn out all right in the end. That there are plenty more brands where those came from. That you might have the unique task of discovering a yet un-touted but truly wonderful brand.

And mostly, I am confident that I would still have made some of the very best friends of my life with or without those Seven jeans. As soon as I realized that– someday directly after high school completed– as soon as I was brave enough to stand out there on my own again, without relying on a pair of pants to do the talking for me, I was free-er. I wish I could say free, but of course, once you wear of the forbidden jeans, there is no going back. I am, like we all are, aware now, and I can’t return, though I wish I could, to that place of not knowing.

Without wanting to sound like an after-school-special, I can’t help myself but to end by saying that the real things still matter most: being truthful with yourself and others, following your passions, taking risks, living for the sake of creating a fulfilling life. The brand names are mostly for show. And show won’t get you very far– it’s only a matter of time before the curtains close.

Monday’s Meditation: On This New Day

Monday’s Meditation: On Reframing Our Problems

Monday’s Meditation: On What NOT To Do

Monday’s Meditation: On Why I’m Fed Up With The Holidays

Monday’s Meditation: On The Real Meaning Of Home

Monday’s Meditation: On Why Women Suck At Making Plans (& How We Can Be Better)

Monday’s Meditation: On Restarting With The Seasons

Monday’s Meditation: On The Question Of What Comes Next