I’m rawther exhausted following a fairly epic closet installation and it’s overcast in Seattle, so I’ll cut to the quick.

This weekend it’s officially time for you to part with all the broken things in your space and life.

Why? Because you haven’t fixed them in all this time, you aren’t fixing them, and although your keeping the broken thing is a anxiety-ridden measure to hold onto the option of having the item, the fact that you’ve lived with it in its broken state–and thus essentially lived without it–for this long means you’re really all set. 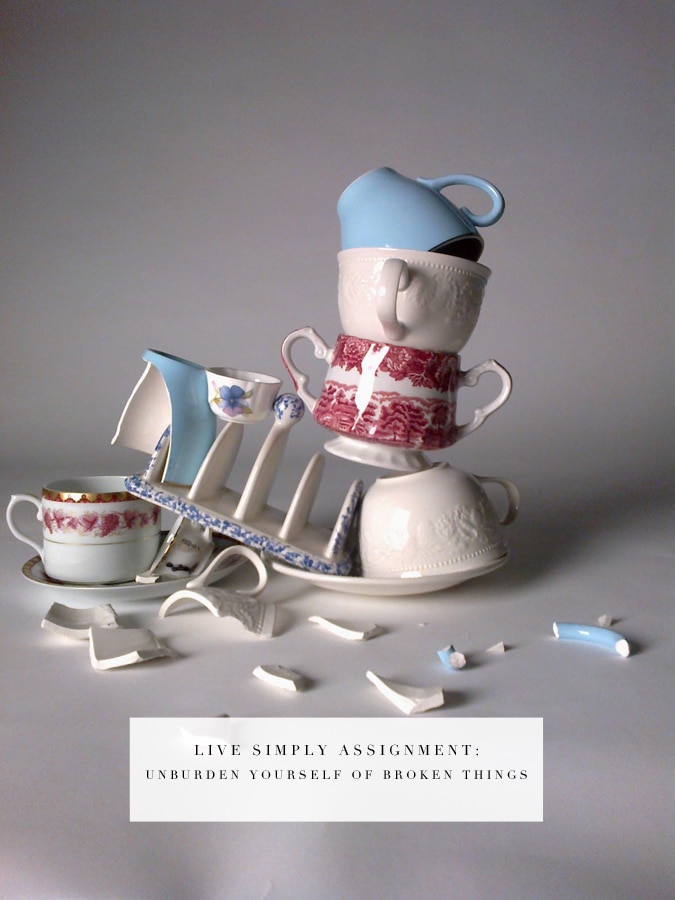 Go have yourself a scavenger hunt for broken stuff. Get the kids involved and tell them its practice for Easter, except instead of giant jelly beans at the end there’ll be a ceremonial discarding of crap. They’ll love that.

I don’t care whether it’s a broken vase, a broken teacup, a broken lamp, a broken jacket with a broken zipper, or a broken speaker set. Locate all the things that are in disrepair and shed your life of them.

Because broken things have bad juju and you don’t need that around you when you’re trying your hardest hardest to get the good stuff a’ flowing. And because you’re allowed to let yourself off the hook; you don’t have to repair every thing that’s come into your life. You’re allowed to accept that a thing had a life with you and then it broke and now its time with you has come to an end.

Psssst: head on over here for more thoughts on broken things.

And if your broken stuff is of the electronic-orientation, you might want to go ahead and check out this post on how to erase tech of confidential data so you can then donate and or recycle them.

If you do decide to tackle this weekend’s assignment, please spread the inspiration your efforts will undoubtedly cause in others by sharing about it on social media using the hashtag #LIVESIMPLYBYME. You can also tag me (on IG: livesimplybyannie and on twitter @livesimply) for a chance to have something really special happen.